St Helen and her Yorkshire churches


Today is the feast of St Helen. Last year in my post St Helen I concentrated on the historical figure of the Empress Helena, the mother of Constantine the Great. Devotion to her as indicated by church dedications was quite extensive in my home area in Yorkshire, and elsewhere in medieval England.

Indeed there was the medieval belief that she was British, the daughter of Coel ("Old King Cole") the eponymous founder of Colchester - indeed one could be quite unhistorical and say that she was therefore an Essex girl.

Churches or wells dedicated to her are often found associated with Roman sites or at least places with Romano-British associations. Indeed writing this I realize that I was born in the parish of St Helen Sandal Magna at Wakefield, a parish which includes a hamlet called significantly Walton (the tun of the Welsh, i.e.Britons).

Amongst several local examples two stand out in my own mind as noteworthy.


St Helen and the Holy Cross at Sheriff Hutton, north east of York, is a church I have known since I was a small boy, as I had relatives living in the village, and remember very clearly a holiday there exploring the many wonderful historic sites in the neighbourhood when I was not quite six  - my enthusiasm for the past was well established by then and has continued unabated. Sheriff Hutton is a place rich in historic interest, dominated by the ruins of the late medieval castle, as outlined here  and here.

Within the parish is a Roman villa site - which I have heard interpreted as the Empress' country residence at the time of Constantine's accession - a nice thought, but unlikely I think...

The church is medieval with later patching but its surprising treasure is what is usually claimed to be the tomb of Edward of Middleham, Prince of Wales, the only son of King Richard III and Queen Anne Neville, who died in 1484, the year following his creation and investiture as Prince when his parents visited York in the late summer of 1483. 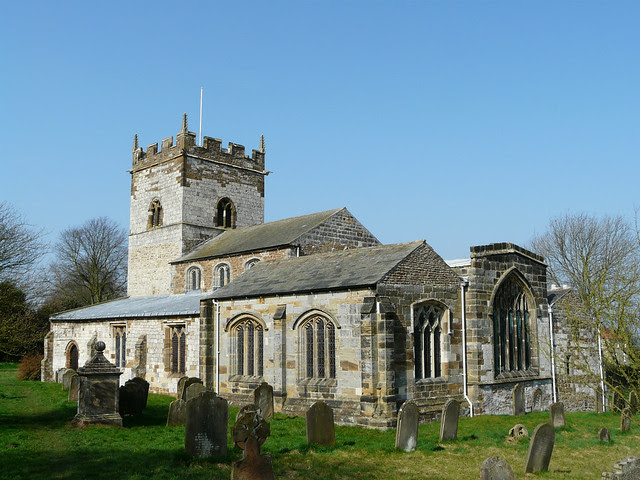 The tomb ascribed to Edward, Prince of Wales, son of King Richard lll and Queen Anne Neville.
It has been moved from a free-standing position, probably in the south chancel chapel. Beyond it is the fourteenth century effigy of Sir Edmund Thweng in what was once his chantry chapel.

The life of Prince Edward, and not much is known about him despite his rank, by A J Pollard in the Oxford DNB  can be read here.

This records modern doubts as to the authenticity of the tomb at Sherriff Hutton. These are discussed by my friend Richard Knowles in the booklet he co-authored with  Pauline Routh  The Sherriff  Hutton Alabaster: a re-assessment  published in 1981. Whether or not it is the tomb of the Prince it is a monument to set the thoughts running, as does the history of the castle as a royal residence and prison in the fifteenth and early sixteenth centuries.

Nearer to my home town is the church of St Helen Burghwallis, midway between Pontefract and Donacster, and close to the Roman road which underlies the modern A1 and with the site of a Roman fortlet in the parish. Its original name of Burgh suggest an important fortified role long before the wallis family gave it their patronymic as a suffix.As a settlement it begs historical questions.

The church itself is a simple building - chancel, nave and tower - and dating from the later Anglo-Saxon or early Norman  period. the walls include herringbone masonry. Unusually in the area it has preserved its fine late medieval Rood Screen. The Anne family, lords of the manor from the later sixteenth century, were recusants, and the adjacent Hall has the remains of a priest-hole. During the French Revolution they gave refuge to the Abbe Louis Leroux who died there in 1842 and lies buried in the churchyard of St Helen's. The church was redecorated under Anglo-Catholic influence in the 1920s - this is close to the home of the great Anglo-Catholic Lord Halifax and to the "Barnsley biretta belt." Another burial in the churchyard is my friend Canon Geoffrey Bostock who died in 1998 having spent his last months as priest-in-charge of the parish.

However what makes Burgwallis church really memorable is the sense of it being a sacred place. Although it is now many years since I visited it I remember it as a deeply numinous place. I do not think I have ever visited somewhere which so matched T.S. Eliot's oft-quoted lines from Little Gidding :


If you came this way,
Taking any route, starting from anywhere,
At any time or at any season,
It would always be the same: you would have to put off
Sense and notion. You are not here to verify,
Instruct yourself, or inform curiosity
Or carry report. You are here to kneel
Where prayer has been valid. And prayer is more
Than an order of words, the conscious occupation
Of the praying mind, or the sound of the voice praying.
And what the dead had no speech for, when living,
They can tell you, being dead: the communication
Of the dead is tongued with fire beyond the language of the living.
Here, the intersection of the timeless moment
is England and nowhere. Never and always. 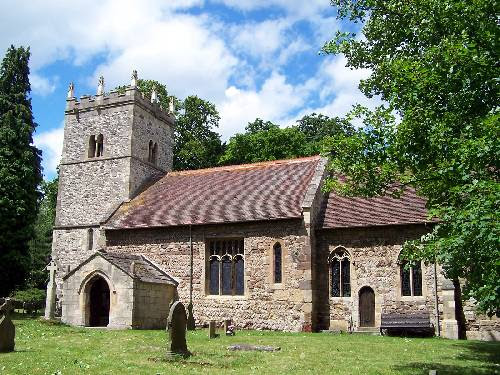 The church of St Helen Burghwallis﻿

Indeed thinking about it makes me feel that I can think of few other places where I would rather my bodily remains awaited the Last Judgement than the churchyear at Burghwallis.
﻿
Posted by Once I Was A Clever Boy at 09:25

St Helen is celebrated in the 1962 calendar in the dioceses of Liverpool and Salford, interestingly. She is also the patron of Brentwood Cathedral (including before the present one was built).

The propers of this feast are on the Latin Mass Society website here., because they are not widely available. They appear in USA supplements to the Liber Usualis because there is an American diocese under her patronage.