Today is St Bartholomew's Day and the 350th anniversary of the coming into force of the Act of Uniformity which definitively restablished the Church of England and the Book of Common Prayer. Those of more Congregationalist sympathies who could not accept the restored settlement were excluded from the national Church, and the Dissenting Minister and his convecticle came into being.

The new Book of Common Prayer was slightly amended, but essentially that of 1559, itself with slight changes the 1552 book. The 1662 Act of Uniformity is the continuing guarantee of the Established Church and of its primary Liturgy, the BCP. 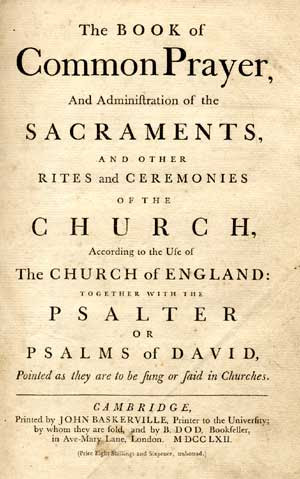 It occurs to me that the tragedy of the contemporary Church of England is this loss of Uniformity. By that I do not mean the loss of liturgical uniformity. That was blown away by the second and third generation of Tractarians - the Ritualists - and ill considered measures such as the Public Worship Regulation Act of 1874 and its debacle in the Lincoln Judgment of 1890 did nothing to halt such changes. The 1927 and 1928 debates on revising the Prayer Book marked the end of attempts to enforce real uniformity of practice - the 1928 Prayer Book issued on the authority of the Archbishops is a landmark in terms of practice and policy.

The loss of Uniformity I mean is that loss of coherence in belief and practice. In the last half century the Church of England seems to have abandoned any consistent sense of having a shared set of beliefs both with fellow Anglicans and fellow Christians.

As a former Anglican and as an Englishman I regret this - it is not good news for our society. The awareness of that fragmentation of underlying shared views led in part to my seeing that my true home was elsewhere, in thaa Catholic Church of which there are still residual parts in the Church of England, but not enough to sustain me on the journey.

The confidence of being a national Church that could re-evangelise the nation has gone. The idea once held by Anglo-Catholics such as T.S.Eliot that by becoming more Catholic the Church of England could thereby Catholicise the country has proved, or been shown to be, a chimera.

The Church of England was always a strange sixteenth century theological and constitutional compromise. By 1662 it was nevertheless the majority faith of the English people. Its loss of that identity in the last half century may well have exposed those inherent contradictions to the glare of full daylight, but in abandoning any real coherence or discipline in anything the Anglican establishment has progressively (sic) abandoned its ability to speak to the nation.