Today is the 480th anniversary of the death in 1532 of Archbishop William Warham of Canterbury, the last pre- reformation holder of the Primacy. Born circa 1450 he had held the see of Canterbury since 1504. 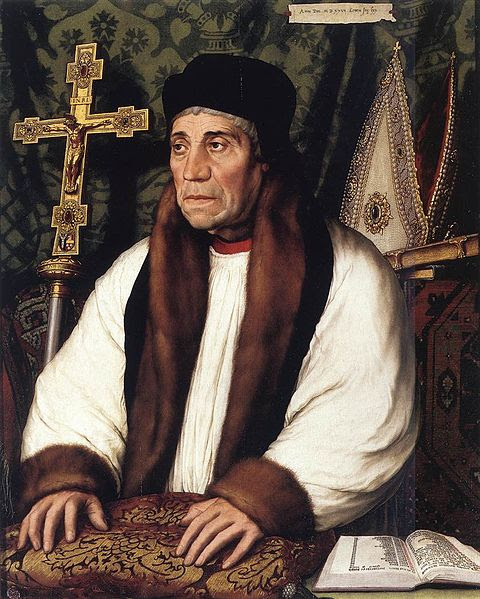 Archbishop Warham in 1527
Portrait by Hans Holbein the Younger

The biography of him by J J Scarisbrick in the Oxford DNB can be read here  and there is another, illustrated online account of him here.

Warham appears to have been a good example of the late medieval English episcopate - devout, intelleigent, conscientious and loyal, but outflanked by men with greater determination, be they Cardinal Thomas Wolsey or King Henry VIII. His death removed a man who at his advanced age was beginning to realise and resist the challenge the Church now faced, and paved the way for the elevation of Thomas Cranmer.

I think the portrait suggests his character very well. The Primatial cross with his arms and the mitre, covered in pearls and with a seed pearl ground may well be depictions of his actual pontificalia. Holbein's drawing for the painting survives in the Royal collection at Windsor:

Image: copyright H.M. The Queen -The Royal Collection and arthistory.about.com