Churches of St John the Baptist

As an Oratorian pointed out once in conversation with me devotion to St John the Baptist, so popular in the middle ages, has virtually disappeared from popular practice, although, of course he remains central to the liturgical narratives of the Incarnation and proclamation of the Gospel. He was a very popular patron saint for medieval churches, and they are part of our Christian heritage as a country. Here are several churches under his patronage which I recall with particular interest and affection.

St John the Baptist Royston is a few miles south west of my home town and close to Barnsley. From a rather high and dry Anglo-Catholic tradition it had moved by the late 1980s to a thoughtful modern rite Anglican Catholic style, and it was the focal point for people to gather to go on the local coach to the Anglican National Pilgrimage to Walsingham on Spring Bank Holiday Monday. The church is mainly fifteenth century, and its most noteworthy feature the charming, and almost unique, feature of the oriel window on the west tower: 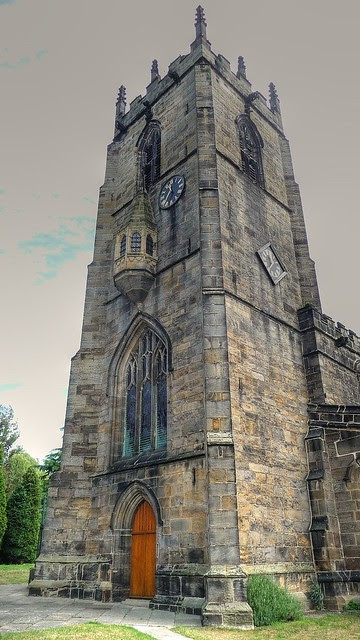 
To the west lies the great church of St John the Baptist at Halifax. It is also a largely fifteenth century building at the centre of what was the largest parish in the country. In 1879 it nearly became the cathedral of what was in 1888 became the diocese of Wakefield, and since 2009 it has rejoiced in the status of a Minster. As a building it is a tribute to the piety and prosperity of the Halifax clothiers of the late middle ages, and its rather dour style captures something of the area in which it is situated. There is a good online account of it and its contents here. 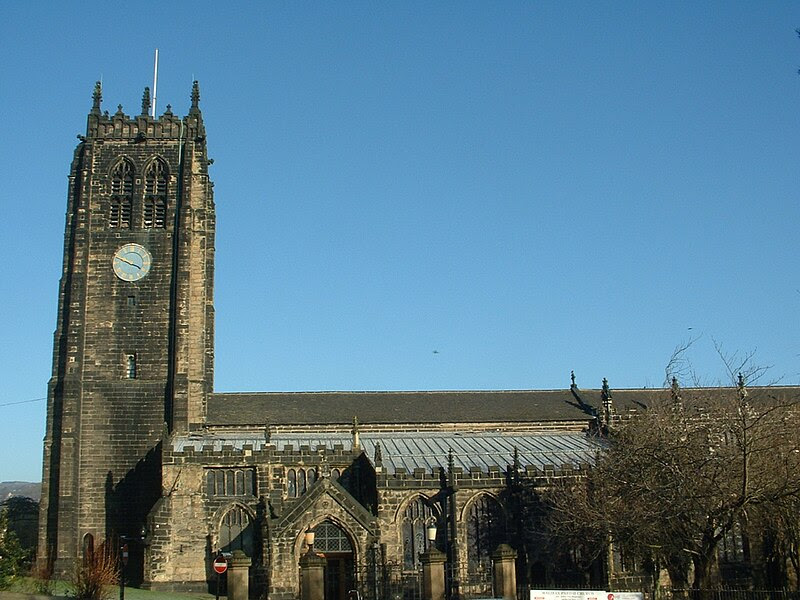 It was at a Walsingham day of devotion in the church - its usual churchmanship is Broad Church - that I first served at Benediction.

Another monument to the medieval cloth industry is the great church of St John the Baptist in Cirencester in Gloucestershire, which I have visited on holiday in the area. More delicate and sophisticated in detail than Halifax it is the largest parish church in the county it too is a celebration of the prosperity of the town even as the cloth trade moved out into the surrounding Cotswold villages. There is an online introduction to the church here. 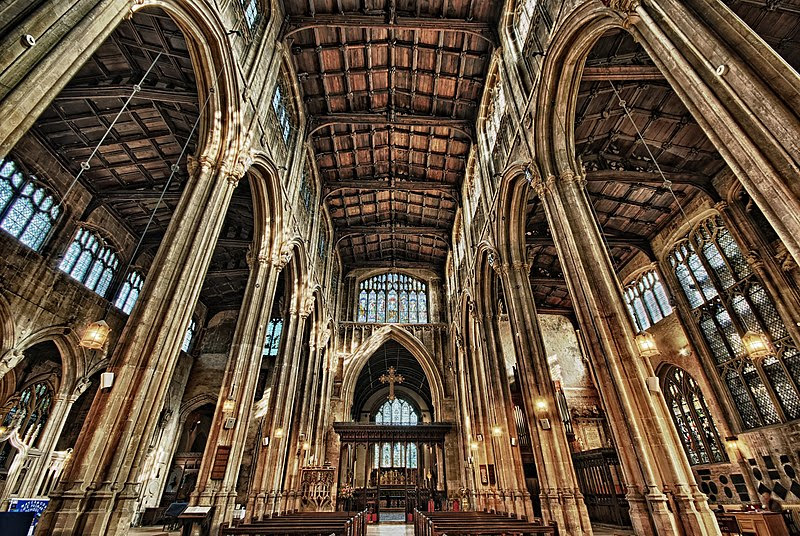 The interior of Cirencester parish church


Further to the south west, in Somerset, is St John the Baptist at Glastonbury. I used to visit this splendid example of the local style when I used to go on retreat to Glastonbury in the late 1980s and early 1990s, and in 1996, when I spent Christmas in the town, I saw specimens of the Glastonbury Thorn which grow in the churchyard in flower. The church contains a gremial that belonged to the Abbots of Glastonbury and some interesting tombs, including one of a fifteenth century bursar of the abbey called Camelford, with splendidly realistic camels carved on his alabaster tomb. 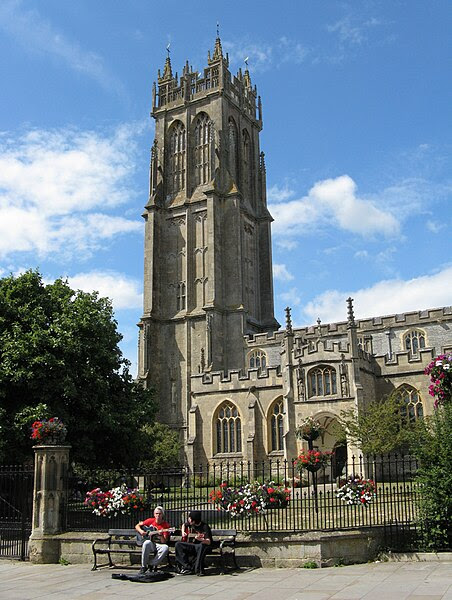 St John the Baptist Glastonbury
The mid to late fifteenth century tower is attributed to Abbot John Selwood.
The Thorn is to the right of the porch.

Turning to the north west  there is the remarkable and little known church of St John the Baptist at Chester. There is an account of it here. There was a church here, outside the Roman walls of the city, by 973 when King Edgar, following his coronation at Bath, was ceremonially rowed along the Dee from the city to the church by his various under-kings from the British Isles. The present building was begun in 1075 as the cathedral to replace Lichfield but  it fairly soon lost out to the abbey in Coventry, and from the twelfth century until the reformation it served as a pro- or co- cathedral, with a collegiate chapter, for the diocese of Coventry and Lichfield. When the new diocese of Chester was created in 1541 its cathedral was established in the former abbey of St Werbergh. With the dissolution of the college it became a parish church, the choir was demolished and in 1881 the north west tower collapsed, and was not, very regrettably, rebuilt. What remains is nonetheless an eloquent and fascinating building, a case of what was and what might have been. 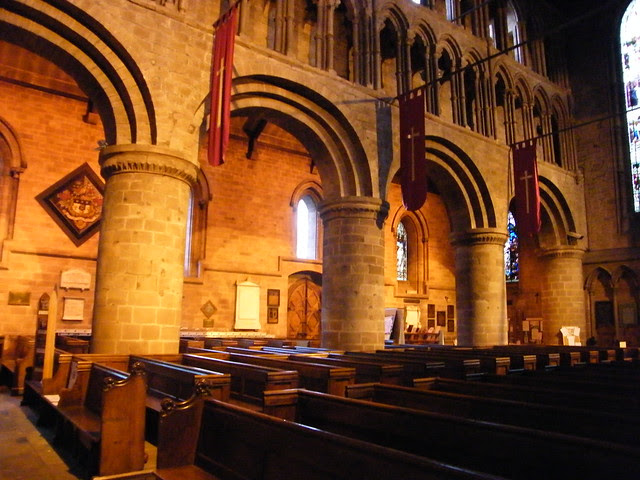 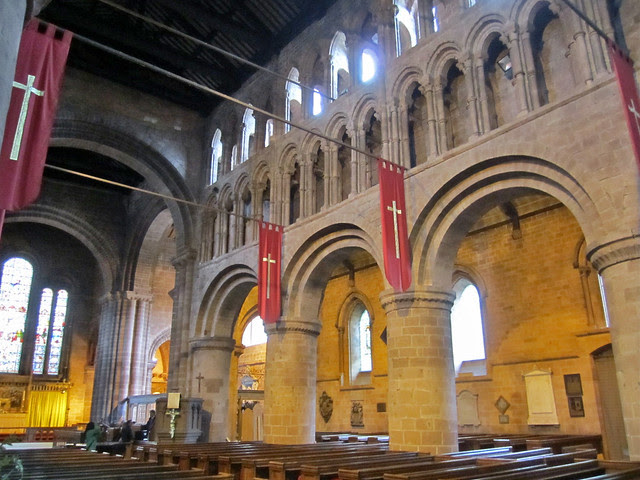 
Finally, but still in the old diocese of Coventry and Lichfield, is St John the Baptist Tideswell.  Again a later medieval rebuilding from the fourteenth and fifteenth centuries, there is more about it here. 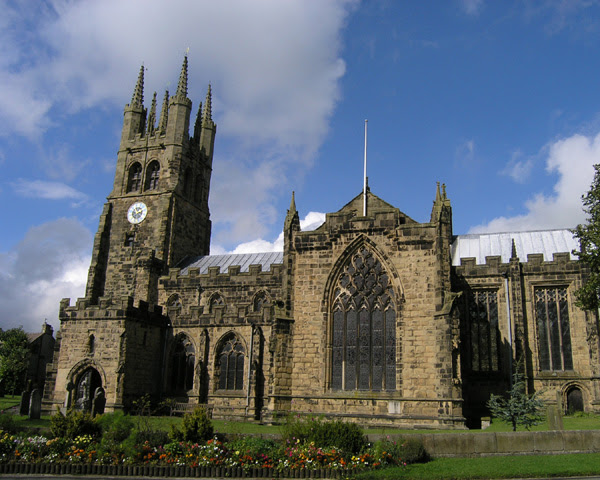 Tideswell church
I
mage:chaplog.co.uk
There are more photographs of the church here, and information about the town here.

As a possession of the Dean and Chapter of Lichfield the church was drawn into the local gangwarfare between local factions in the fourteenth century, as described by my (maternal) second cousin J.G. Bellamy in his Crime and Public Order in Later Medieval England. In the sixteenth century it featured in the lives of the martyrs Blessed Nicholas Garlick and Blessed Christopher Buxton, who studiesd at Tideswell Grammar school under Nicholas Garlick.

My paternal grandmother was born at Tideswell  in the 1860s and, I assume, baptised in the church. One of my cousins remembers her recalling when she was a girl the difficulties some ladies had found when entering the pews in the church because of  their crinolines.

These are just six, if particularly fine, medieval churches, all very well worth a visit in themselves, but all also a reminder that every historic church is worthy of a visit and study.

Thank you for your blog. Very interesting piece about St John. Visited all the links you posted and looked up some info in Wiki.

Thank you for the photos and information about St John Baptist Church. I was baptized there in 1965 and always thought what it looked like and seeing the Photos, I just cannot believe how lovely and grand it looks. My parents surely baptized me in a great style and will love to visit soon.