The Funeral of Mary Queen of Scots

In February I posted Fotheringhay February 8th 1587 about the execution of Mary Queen of Scots. As she herself is supposed to have remarked that day "In my end is my beginning" and her story had by no means ended.


The way the burial of her body was organised is indicative of the double think on the part of the government, exemplified by Queen Elizabeth sending William Davison, the Clerk of the Privy Council who had dispatched the death warrant with Elizabeth's signature to Fotheringhay, to the Tower for 19 months in punishment, and her protests that she did not wish the sentence to be carried out.


After the execution the clothes Mary had worn for her death were burned - which would suggest that those which survive and are displayed as such may at best be from her wardrobe, but not that they were worn on that fatal day. The government wanted to avoid relics. Mary's head was displayed for part of the day in a window of the castle and her body embalmed - the internal organs were removed and buried within the castle. The fact of her embalming indicates a respect not normally shown to victims of execution. But what to do with her body? Unlike victims at the Tower of London, buried in virtually anonymous graves in St Peter ad Vincula, for Queen Mary something grander was envisaged. Her request to be buried in France was denied - and it is not difficult to see why - but instead she received an Anglican state funeral with full heraldic honours in Peterborough cathedral.


Peterborough had seen something similar fifty one years earlier, in 1536, when the Princess Dowager - i.e. Queen Katherine of Aragon  - was interred as the widow of Prince Arthur, rather than as Queen.


Not until late July were preparations complete, including imperoving the roads for the cortege to travel the twelve miles from Fotheringhay eastward to Peterborough where the funeral was finally held on Tuesday August 1st 1587. Local dignitaries and the late Queen's household participated and established Church was represented by two Bishops, those of Peterborough and Lincoln. The Dowager Countess of Bedford acted as chief mourner.


In his sermon William Wickham, Bishop of Lincoln stated that he would say nothing of the late Queen's life or death as he had witnessed neither himself.


She was buried in the South Choir Aisle, opposite Katherine of Aragon, and following the service Bishop Richard Howland of Peterborough gave a dinner for the mourners in his palace which adjoins the cathedral.

Peterborough cathedral as it would have appeared in 1587 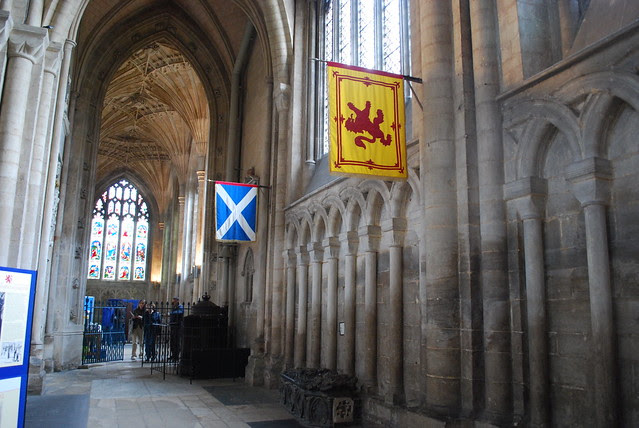 A collection of contemporary tracts describing the1587 funeral and also the later ceremonies in 1603 and 1612 was published in 1890, and makes for very interesting reading if you have an eye for sixteenth and sevemteenth century ceremonial. The collection can be read online rhere.

The parish sexton, Robert Scarlett, buried both Queen Katherine of Aragon and Queen Mary of Scots, and is himself buried in the cathedral, having died in 1594 at the age of 98. His portrait is still in the cathedral

Under the portrait are these lines celebrating his career:
It may seem far fetched to suggest that Old Scarlett buried two people from every Peterborough household during his life, but as the population at this time was probably around 1,500, and Peterborough saw its first outbreak of plague in 1574, he may well have accomplished that feat in his 98 years, especially given his "strength and sturdye limm"

In 1603 Queen Mary's son, now King James I of England, sent Garter King of Arms with a pall decorated with Mary's arms to place on her tomb. A new tomb for her in Westminster Abbey was commissioned in 1606 from Cornelius Cure and, following his death the next year completed by his son William.

Finally on October 11th 1612 came exhumation from Peterborough. A modern plaque and the Royal and national flags of Scotland today mark the site of the grave. Queen Mary's remains were taken for reburial at Westminster in the south aisle of King Henry VII's Chapel, opposite Queen Elizabeth I. who lies in the north one. Queen Mary I had planned to rebury her mother Queen Katherine at Westminster and provided for a joint tomb in her will in 1558, but that plan was never carried out. Queen Elizabeth I did nothing to recover the body of her own mother from its ignominious grave in the Tower of London. King James may have had no personal memory of his mother - they were seperated when he was only a few months old, but in death he honoured her, and perhaps by burying her at Westminster implied not merely that she had given him his title to the English throne, but that she was herself its rightful occupant. 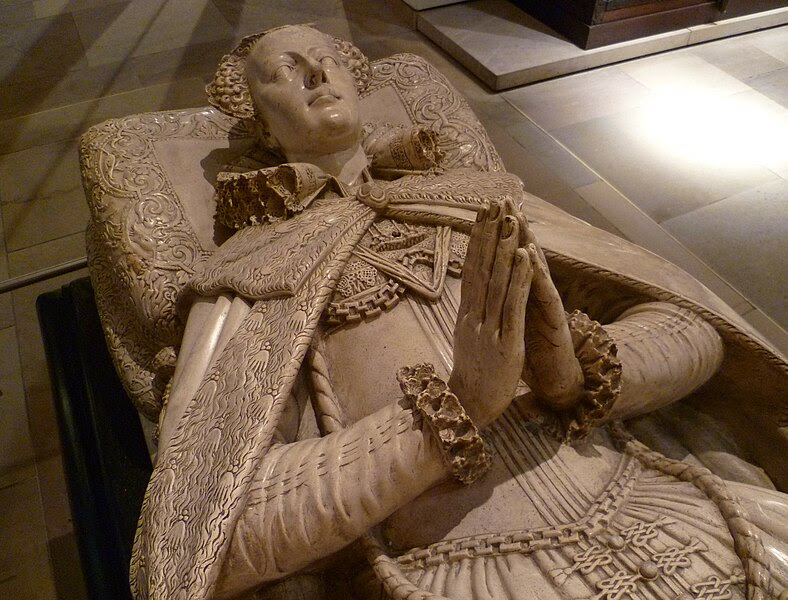 Copy of the effigy at Westminster

Thank you for the wonderful story of Mary Queen of Scots. She was my ancestor and her sons, mine, on down the line. She WAS and always WILL be the TRUE QUEEN of Scotland and ENGLAND. Elizabeth was wrong in having her executed and it is SHE that will have to answer to God on that day of Judgement as we all will.