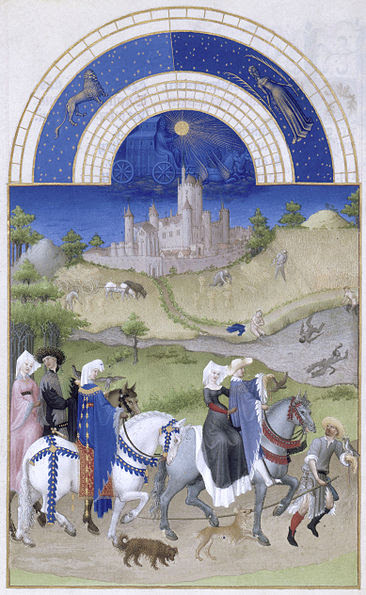 The August illumination in the Très Riches Heures of the Duke of Berry is attributed to Jean Limbourg and shows an aristocratic falconry party. The young man on the leading horse as well as the huntsman or groom wears a straw hat that looks very contemporary to the modern viewer, and is presumably the type of headgear " a sorry straw hat" in which Henry Beaufort  Duke of Somerset was recorded as jousting in in 1463. Here once again the fashionable aristocratic world of the early fifteenth century are out and about enjoying themselves in traditional country pursuits.

In the background are a group of bathers enjoying swimming in the warm weather whilst others gather in the harvest. The mood is relaxed and prosperous, suggesting long lazy days for some, and for those working warmth and sunshire, and the promise of plenty for the coming autumn.

In the background is the Château d'Étampes. Today, as the link expalins, only the keep remains of the castle. Étampes is of particular interest to me as it may have inspired the design of Clifford's Tower at York in the thirteenth century and that in turn may have influenced, in the fourteenth century, the design of the great tower, the so called Round Tower, of the castle in my home town of Pontefract.

Thank you very much for posting this page from the Tres Riches Heures and drawing attention to the swimmers. I do not think I have ever observed medieval swimmers before!