A crime against Humanity

The other day I was looking on the Internet for some pictures of the remains of the abbey at Cluny in answer to an enquiry from a friend, and as I did so I was once more struck by the enormity of the destruction of the abbey in the years after the dissolution in 1790. Having visited Cluny last year that is all the more borne in upon me. The remains are an indicator of what has been lost, and the realisation of just what was once there. The scale of the destruction is, in its own way, quite awesome. It is also profoundly shocking. This led me back to a recurring line of thought with me when confronted by such wanton destruction, that is of just how wicked it is.

It was whilst thinking along these lines in the devastated remains of the great Norman abbey at Jumièges, also a casualty of the 1790s, in 2004 that an Anglican priest friend opined to me that it is not much comfort in such places to think that the perpetrators of such vandalism must surely be in Hell, and I agreed with him.

At Cluny as a result of the demolition which begn in the 1790s and continued into the 1820s  only the main south transept of what was for centuries the largest church in Christendom  - and then only surpassed by St Peter's in Rome - survives intact.There is an introduction to the history of the house at  the online account Cluny Abbey.


Today we often hear the phrase "crime against Humanity" about massacres and political violence, and yes, such they may indeed be, but crimes can also be committed against Humanity which do not involve the loss of human life or physical injury. There are crimes against Humanity which involve the destruction of the things of the spirit and of objects of beauty. By doing so, and the destruction of Cluny and Jumièges are classic examples, future generations are impoverished of great and wonderful things that could and no doubt would have enriched their souls and minds. This is not just loss for the art historian or the heritage-minded - it is a loss for all of Humanity. 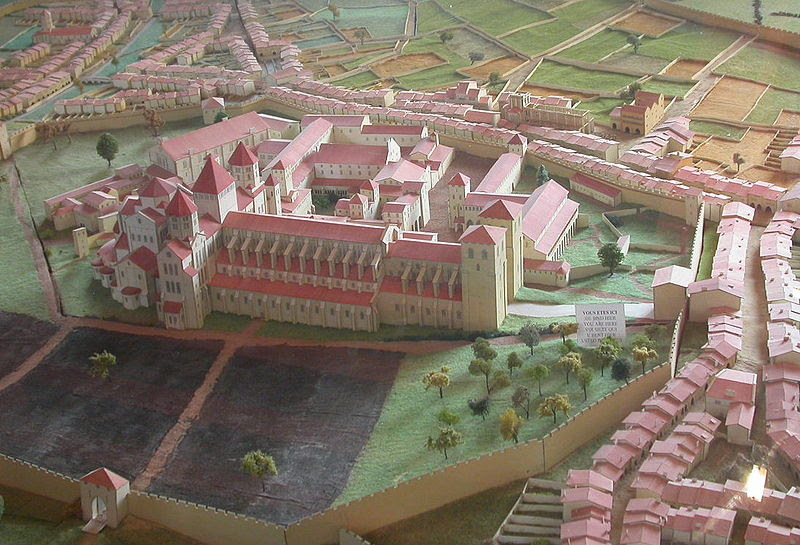 A model of the abbey of Cluny in its complete state

Our Lady of Good Success-pray for us. said...

' The remains are an indicator of what has been lost, and the realisation of just what was once there. The scale of the destruction is, in its own way, quite awesome.' we mustn't speak of being awed by anything, satan forbid...ours is a horizontal denial of anything that might cause us to look towards Glory...why am I whispering?

I read your Post on visiting Cluny, last year,
and thought it an excellent summary. Thank You.

I have, today, put up a Post on Cluny Abbey
(virtual reconstruction) that you and your
Readers may find interesting.

I do hope they may be of interest in your research.