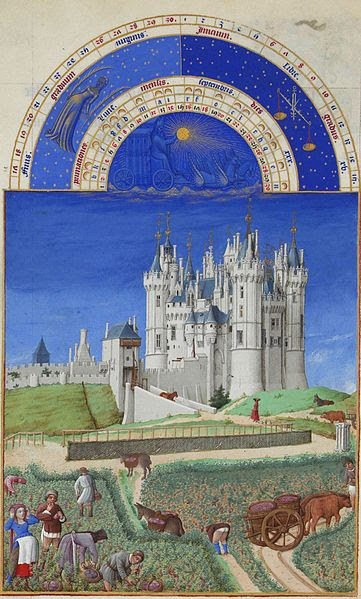 The painting is attributed to Paul Limbourg and, in part, to the later painter who worked on the manuscript in the 1480s, Jean Colombe.

September is the time of the grape harvest. Five people gather the grapes whilst another man, who looks to be sampling the vine crop, and a woman, apparently pregnant and perhaps stretching after bending to gather the grapes, watch them. The bunches of grapes are put first into baskets and than transferred to paniers which are borne by mules. The paniers are then loaded into larger whicker containers on carts drawn by oxen, presumably to the winepress linked to the château of Saumur in Anjou which forms the backdrop to the scene.The towers are decorated with gilt fleurs de lys, similar to the details shown on English castles in sixteenth century survey drawings.

Once again in the Limbourg's scenes there is the sense of peace and tranquility, of plenty and a confident enjoyment of the good things of life.

Anjou is still a wine producing region and, unlike some others of  the Duc be Berry's residences, the castle is still excellently preserved as can be seen at the link Château de Saumur. The survival of the château and of parts of other ducal residences confirm the depictions by  the Limbourgs. Even if allowance is made for elements of idealisation in the warm sunlight of the artists' creation, and recalling that France in these years of 1412-16 was a very troubled realm, this is nonetheless confirmation of the medieval castle as primarily an aristocratic residence rising out of its agricultural base. Saumur may well be a fortification of considerable strength, but the message conveyed by the artist, and that expected by the patron, is peaceful.