St Firmin and his relics at Amiens - a late medieval view

Today is the feast of St Fermin (also spelt Firmin). There is an informative account of his life and cult here with expandable illustrations of the polychrome panels about his life, death and miracles in Amiens cathedral which are featured below.

According to legend St. Fermin, a native of Pamplona and a disciple of St. Saturninus of Toulouse, founded the first church in Amiens in the third century and was martyred there on September 25th 303. Not much is known about him and his biography considered to be mostly an invention of the eighth century.

The legend as it developed from the eighth century onwards the life of St. Fermin is told in these late Gothic polychromatic reliefs made between 1490 and 1530 and which ornament the tomb of Adrien de Henencourt, formerly Dean of the cathedral, in the south ambulatory.  They depict his story in terms of contemporary late medieval life, and with wonderful vigour and detail. The following series of photographs are, I think, considerably better than those attached to the online account I have linked to above. 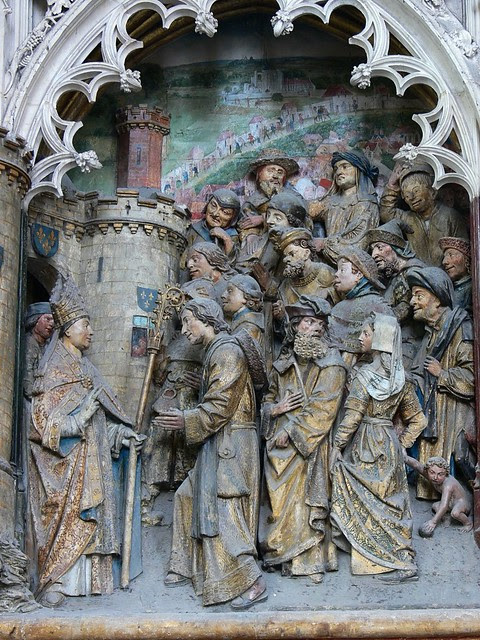 Fermin being desperate to achieve martyrdom travelled from the south of France to the pagan areas of Gaul (northern France). He was arrested by the Roman authorities in Lisieux but for some reason the governor died and he was released. He then travelled to Amiens. 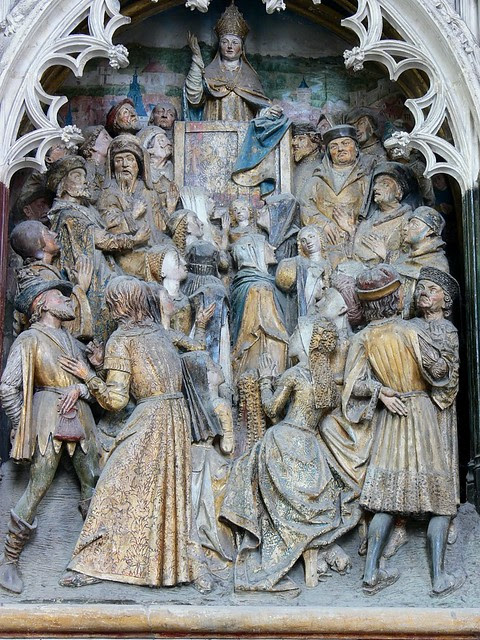 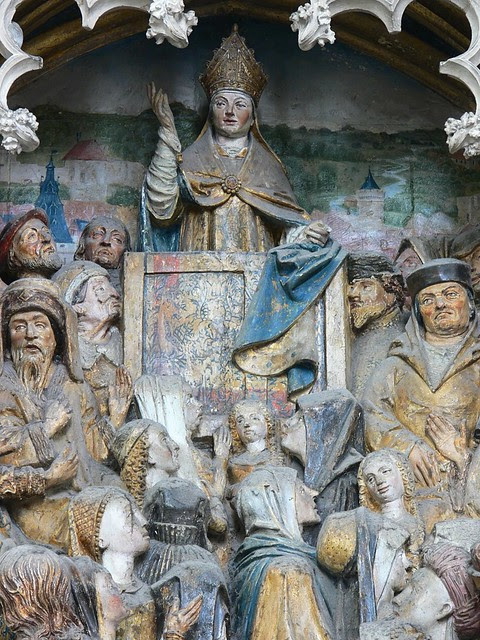 Detail of the scene above 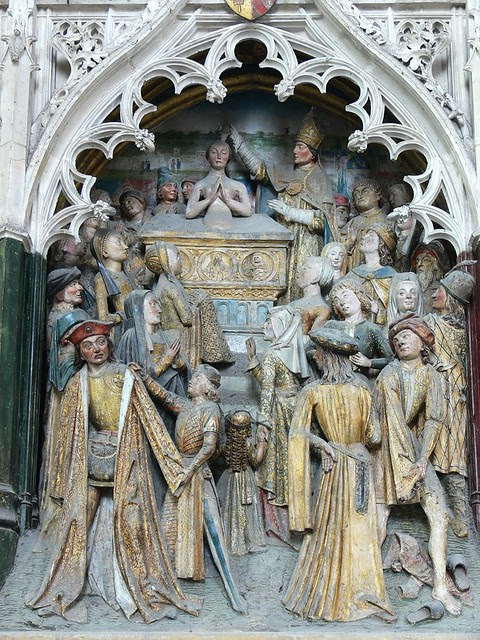 Baptising the People of Amiens

where he established a large church, and where he converted and baptised many of the inhabitants. 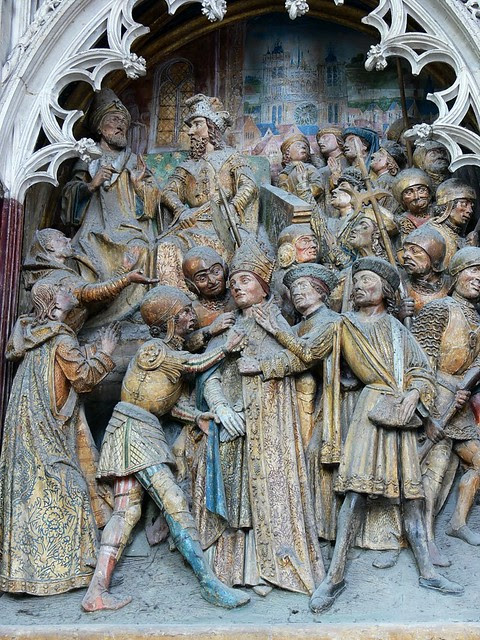 The pagan priests are then supposed to have reported Fermin to visiting Roman officials, who had him arrested and beheaded. 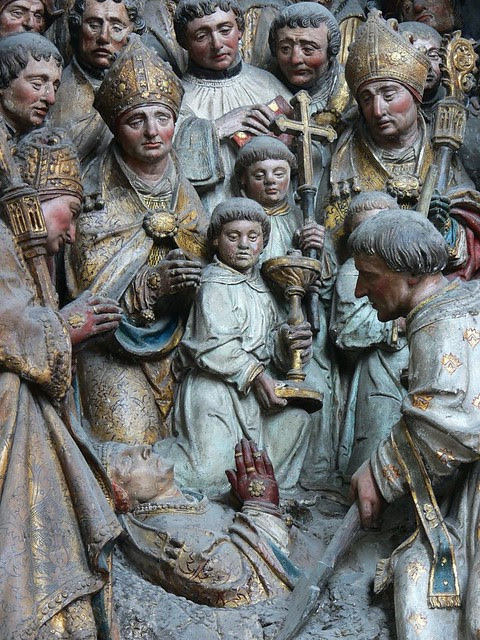 Exhumation of the Remains


At the begining of the seventh century the then bishop of Amiens, St Salve, got the people and clergy to pray for a sign as to where Fermin's body was buried. On the third day God sent a ray of the sun, which pierced the wall of the monastery where the body lay. When the faithful dig there they find the body of St Fermin. A sweet odour arose from the grave 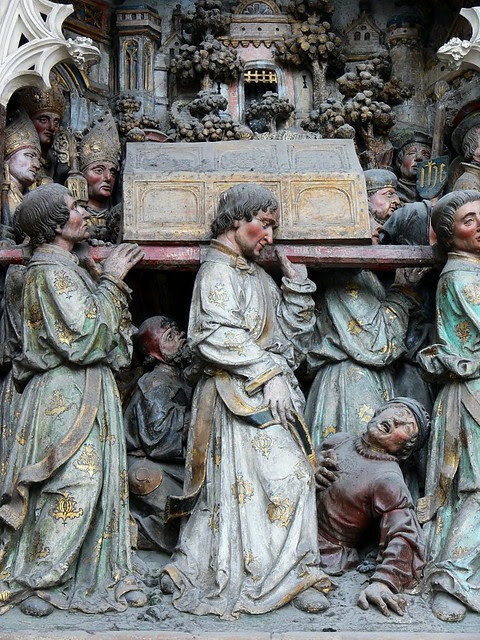 Bringing the Relics To Amiens

As the body was carried through the streets of Amiens a number of miracles happen: the sweet odour from the relics causes ice ans snow to melt, trees and meadows flowered and came into leaf, trees inclined reverently towards the saint, the sick were healed, and the rich released their servants and serfs from servitude. 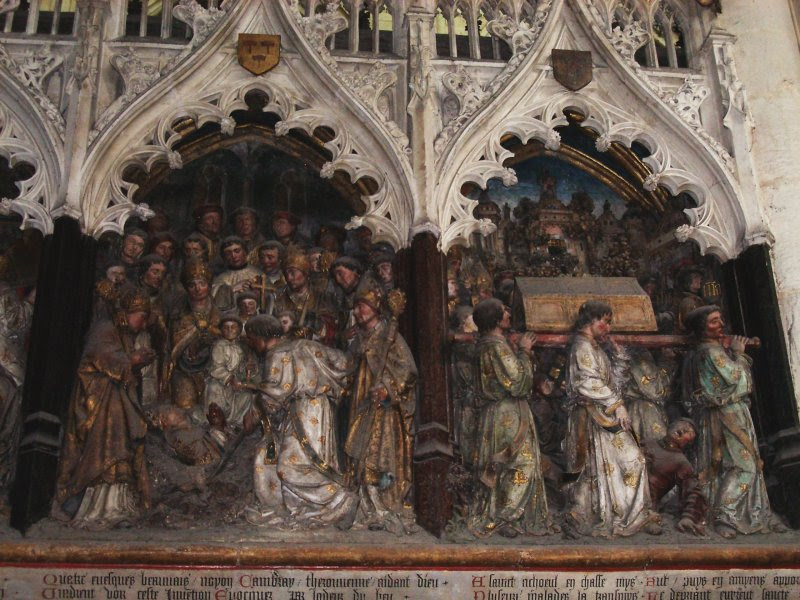 Unless otherwise indicated the images are from professor-moriarty.com, and I am very grateful  to Christopher Crockett of the Medieval Religion Discussion group for the link.

I've been looking for any information about Saint Firmin II - but have found little so far. Just a gentle request - if nothing - there is no need to respond. I will understand the lack of an answer is an answer. Thank you.
My email is Jono121048@gmail.com