Further to my recent post about King Louis I of Hungary I have found pictures of another surviving art work from the court culture of the Anjevin Kings of Hungary. It is the Reliquary shrine donated by his mother Queen Elizabeth to the Convent of the Poor Clares at Óbuda which was was founded in 1334.

Made in Paris in the second quarter of the fourteenth century it is  attributed  to Jean de Touyl. It is now in New York in the Metropolitan Museum of Art, The Cloisters (62.96) The front of the Reliquary The rear of the Reliquary Detail of the central panel


Images: Art in Medieval Hungary
Queen Elizabeth, daughter of  King Władysław I the Elbow-high of Poland, was born in 1305, married  King Charles I Robert of Hungary in 1320, the year her father was crowned as King of a reunited Poland, and died in 1380. It was through her that her son inherited the Polish crown in 1370. There is an account of her life which can be read at  Elizabeth of Poland 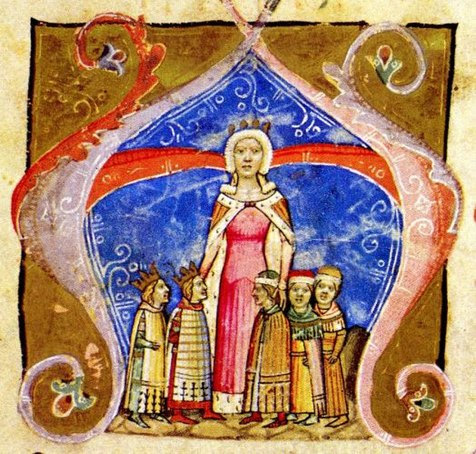