I recently found on the internet these pictures of a spectacular dalmatic, which as the picture indicates, comes from south Germany and is dated to the first half of the fourteenth century. The fabric is Chinese purple damask of circa 1300.
Unfortunately the website does not indicate in which treasury or museum the dalmatic may be seen. However from the context it appears to be in the Kunsthistorische Museum, Vienna, and to be part of the Imperial vesture. The Imperial eagle and the crowned figures in the embroideries would all point to that. One can presume that it was made for an Emperor such as Henry VII, Louis IV or Charles IV. It is certainly a wonderful vestment. 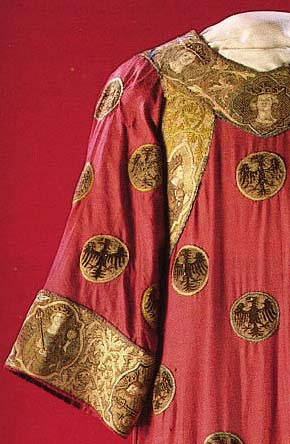 Detail of the sleeve and embroidery
Images: virtue.to