St Maurice and the Theban Legion

Today is the feast, inter alia, of St Maurice and of his companions in the Theban legion. There is an account of the story of their martyrdom and a discussion as to its historical veracity in this online article which can be read here.

As a saint he was not an especial object of veneration in England - the one ancient church I recall dedicated to him was a small one outside Monk Bar in York which was rebuilt in the nineteenth century and demolished in the 1960s. On the continent however his cult was extensive within the Holy Roman Empire - where he was a patron of the Emperors - and in Switzerland, the scene of the martyrdom of the Legion, Italy, France and Spain.
In the middle ages his African origins were often shown in representations of him, perhaps most famously in the thirteenth century statue in Magdeburg Cathedral in Germany:

St Maurice is shown wearing mail-suit and coat-of-plates in this statue in the cathedral of St Maurice and St Catherine in Magdeburg. It is next to the grave of  the Holy Roman Emperor Otto I. The statue was carved circa 1250 and is considered to be the first realistic depiction of an ethnic african in Europe. It is also an important source for knowledge of armour at the time of its creation. Unfortunately, the figure is no longer complete and lacks its lower legs and an item in the right hand, presumably a lance.
Image: Chris73/Wikimedia Commons
Later depictions tended to lose the African nature of the martyrs and they become European in appearance. Romulo Cincinnato's painting of the Legion's martyrdom from 1583 and in the Escorial places emphasis on the slaughter of the legion: 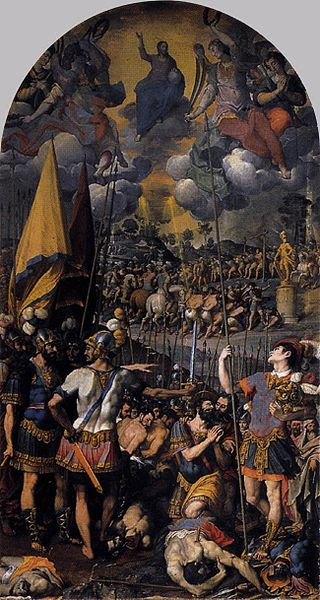 El Greco's painting of the scene, itself from 1580-82 and also at the Escorial, places St Maurice and his immediate companions in the foreground, and the executions in the background: 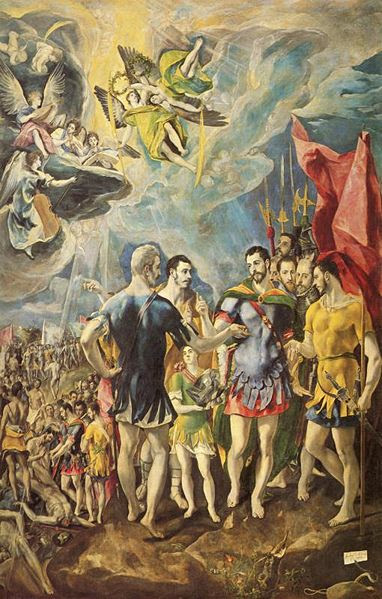 The result is, dare one say it, one which suggests an incredibly polite occasion, almost a garden party of elegant young men politely waiting to be decapitated and engaged in edifying conversation whilst others of their group are martyred.