King Louis I of Hungary

Today is the 630th anniversary of the death in 1382 of King Louis I of Hungary and Poland, often referred to as King Louis (Lajos) the Great.

There is an illustrated online life with links of the King here  and there is one of his second wife and widow Elizabeth of Bosnia here. 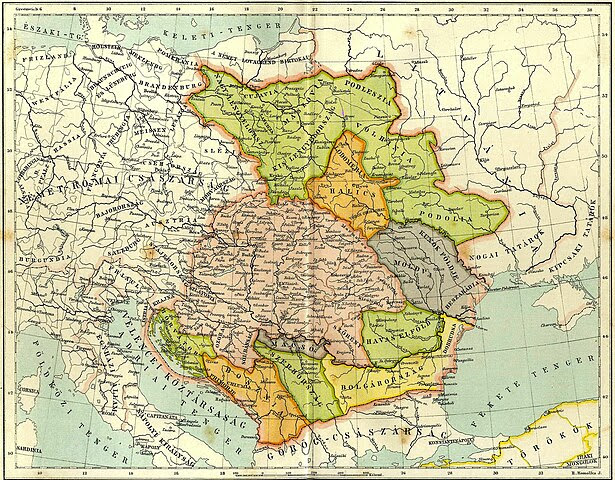 The kingdoms and dependencies ruled by King Louis I after 1370

As a ruler he can be compared to other mid- to later fourteenth century rulers such as the Holy Roman Emperors Louis IV and Charles IV, King Edward III of England, Louis' own maternal uncle and predecessor King Casimir III the Great of Poland and Queen Margrete I of Denmark and the Union of Kalmar. All of them displayed political and diplomatic skill in advancing their territorial claims and in ruling their various kingdoms, and exercised power with style and patronage of the arts and learning.

The Angevin era  was remembered as something of a golden age and many of the national costumes for the nobility at the 1916 Coronation of Bl. King Charles IV were inspired by the Angevin era of Hungarian history.

On his death the two kingdoms went their separate ways with their inheritance by by the King's two daughters - Hungary passed to to Mary who married Sigismund of Luxemburg and Poland to her younger sister Hedwig (Jadwiga ) whose marriage to, and attendant conversion of, Jagiello of Lithuania inaugurated the Jagellonian line of Polish, and, occasionally, Hungarian Kings. 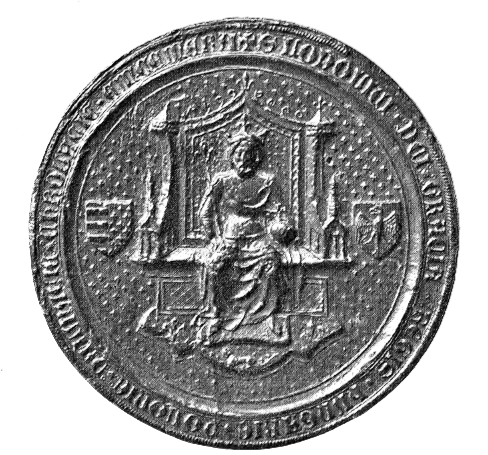 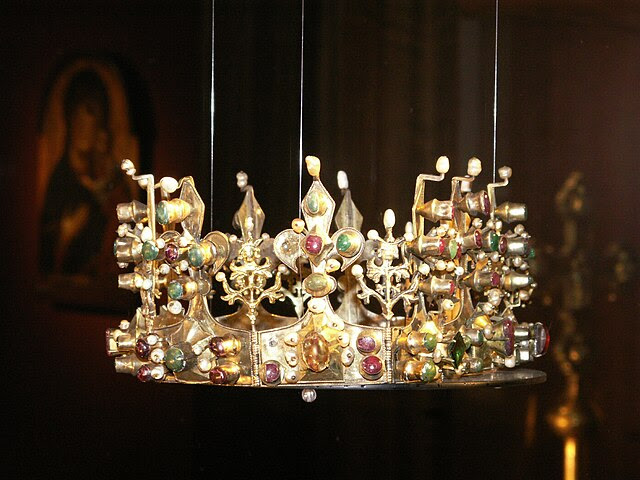 As King he is often thought to the first European monarch known to have used Chinese porcelain tableware, as the surviving flagon known as the Fonthill vase, now in Dublin, is thought to have been his his, and thus indicates something of the court culture of these years. 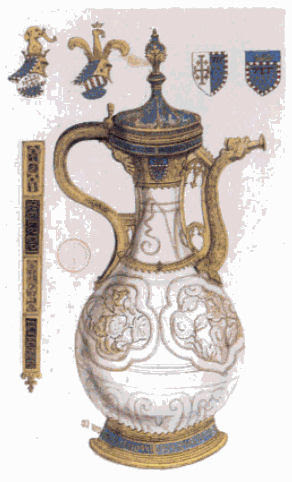 The Fonthill vase before the loss of its mounts, and bearing the Angevin arms


However the following article on the excellent Medieval Hungary blog questions the traditional link between the vase and King Louis, and associates it rather with the Angevin court in Naples of Queen Joanna II in the early fifteenth century. It shows the vase as it appears today and can be read here.


Another example of the artistic and material culture of the period, or from just before Louis' accession can be found in the British Museum.

Hungarian Crucifix of circa 1330

Image: British Museum website
The cross consists of silver plaques arranged on a wooden core. They are decorated with gilding and translucent enamels. The enamels surrounding the figure of Christ depict Christ in Majesty (at the top), the Virgin and St John the Evangelist (at each side) and the figure of Adam rising from his tomb (at the bottom). On the back are represented the Lamb of God and the four symbols of the Evangelists. Smaller quatrefoils of stylized floral motifs and birds are arranged intermittently along the arms and body of the cross.

The coat of arms of Hungary and the insignia of the Hédervári family appear around the six-sided knop at the foot of the cross. The cross may have been made to commemorate the death of Desso Hédervári whose heroic sacrifice in 1330 saved the life of King Charles I (1288-1342). Desso dressed in the king's armour, allowing Charles to escape a Romanian ambush.

The Italian character of the enamels has led to suggestions that the cross was made by a Sienese goldsmith, Peter Gallicus, who was working at the Hungarian court in the 1330s. The enamels were certainly executed by an artist with a detailed knowledge of Italian techniques.

There is an introduction, together with links, about the sculpture and applied arts of the era here.

.Another remarkable survival from this era was found during excavations in the Royal Castle at Buda, first built in its present form by King Louis' brother Stephen of Slavonia. It is an heraldic Cloth of Estate with the Hungarian Royal Arms. It dates from the later middle ages, and had survived in a waterlogged condition in a blocked well shaft. I have seen photographs of it online, but have so far been unsuccessful in finding them again.

The life and reign of King Louis the Great indicates the significance and sophistication of central Europe in the period and make one realise how interesting, if in the English speaking world unduly neglected, a subject the medieval history of the region is.
Posted by Once I Was A Clever Boy at 09:52