St Giles and his shrine

Today is the feast of St Giles, a saint to whom I have devotion having been baptised in the parish church dedicated to him in Pontefract, and where I worshipped for many years and serves as Parish Clerk before coming to Oxford.

My posts about him from 2010 can be read at St Giles and  St Giles by Thomas of Coloswar and from last year at St Giles.


St Giles' cult in medieval England, and indeed across Europe, seems to stem from the network of pilgrimage routes which developed around those to Compostella and Vezeley under Cluniac influence in the later eleventh and early twelfth centuries. His shrine at St Gilles in Provence was on the route than linked these other pilgriage roads and attracted pilgrims. There is an account of the abbey and its remains here.

Severely damaged by both the Huguenots in the sixteenth century and again during the French revolution, only part of the original church is still in use, although it is once again the object of pilgrimage. Its principal and most famous feature is what remains of the monumental west facade with its wonderful sculpture - one of the glories of twelfth century Provencal Romanesque. 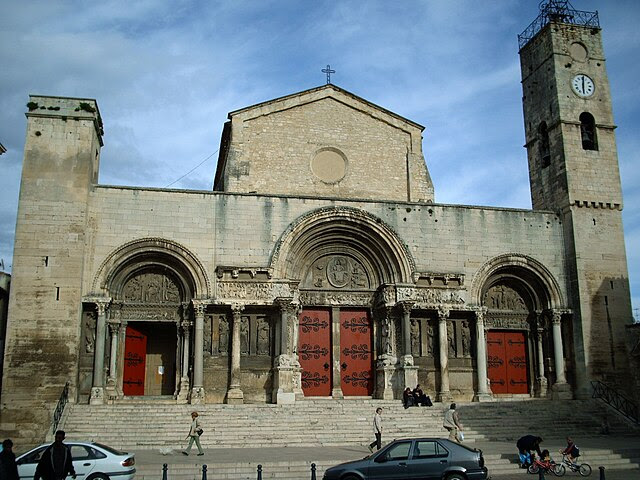 
The west front of the abbey of St Gilles

Two other sites which discuss it are an essay on Saint-Gilles-du-Gard which can be read here, the patronage ...  and one from the Carnegie Museum about their casts of the sculpture which can be seen here.