Today is the feast of Our Lady of Walsingham. 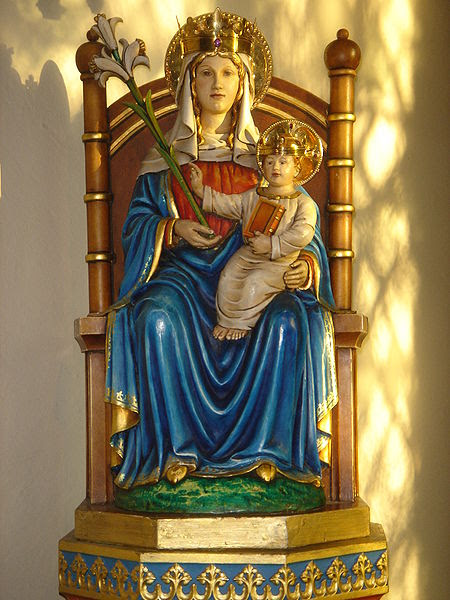 Our Lady of Walsingham
Statue in the Slipper Chapel
Image: Thorvaldsson on Wikipedia
Since 2001 today has been designated as her feast day, and it now surplants in England the feast of Our Lady of Ransom. It was this, originally Spanish devotion, which Pope Leo XIII adapted as the specific Marian feast for the ransoming of England and its conversion and hence its association with what had been England's premier Marian shrine. It was during his pontificate that interest began amongst Catholics in re-establishing it, both at the Red Tower chapel in King's Lynn and by the purchase of the Slipper Chapel at Walsingham itself. It was not however until the remarkable and inspired Vicar of Walsingham, Alfred Hope-Patten, established and caused to prosper the Anglican Shrine that the Catholic hierachy did much to develop the Catholic presence in the village.
I made a considerable number of pilgrimage visits there as an Anglican, and Walsingham is a remarkable and special place, a graced place, I came to know and love. In recent years I have had less opportunity to go there, a fact I regret and hope to remedy.
Last Saturday evening at the Ordinariate Vigil Mass - for the Ordinariate this counts as a Patronal solemnity and was transferred to Sunday in their calendar - Fr Hunwicke's sermon  raised an interesting historical possibility. He started by describing the shrine as it would have been in 1512 or 13, after the visits of two famous pilgrims.

Erasmus in 1517 by Quentin Mattys
Image: Royal Collection/arthistory.about.com
In 1513 Desiderius Erasmus (in my humble opinion a rather tiresome ghastly tedious little liberal, but who cares what I think) visited Walsingham and described the shrine of the Holy House thus:
"When you look in you would say it is the abode of saints, so brilliantly does it shine on all sides with gems, gold and silver… Our Lady stands in the dark at the right side of the altar… a little image, remarkable neither for its size, material or workmanship."
He also added that the water from the Walsingham spring was "efficacious in curing pains of the head and stomach."

In the verses he wrote, in the best and latest Humanist style, in honour of Our Lady of Walsingham he referred to some of the reasons that pilgrims came to the shrine on pilgrimage. One was that men came to pray that their wives would conceive and bear them a son.

The previous year an illustrious pilgrim had come, and that may well have been in the forefront of his mind and intentions. King Henry VIII stayed at East Barsham Manor and then walked two miles - twice as long as usual pilgrims did from the Slipper Chapel - barefoot to Walsingham where he placed a "gold circlet round Our Lady's neck". On 31 January 1510 Queen Catherine had given birth, prematurely, to a stillborn daughter. A son, Henry, Duke of Cornwall, was born on New Year's Day 1511. He lived for only 52 days. In October 1513 Catherine was to lose another son when Henry returned from France. He was either stillborn or died shortly after birth. In December 1514, she had another son, Prince Henry, who died shortly after his birth. Not until 18 February 1516 did the Queen deliver a healthy child, but a girl, the future Queen Mary I. In 1518, Catherine became pregnant for the last time. She gave birth to a daughter on 10 November, but the child was weak and lived either only a few hours or at most a week.

Fr Hunwicke speculated that Ersasmus may possibly have been aware that there was already an awareness of doubts about Queen Catherine's ability to produce the desired male heir to the throne, and hence King Henry's pilgrimage and long barefoot walk to Our Lady in the Holy House. An interesting thought.
A few years after the royal visit East Barsham was rebuilt  - did the owners perhaps anticipate another such pilgrimage?  It remains as an outstanding example of the early sixteenth century country house.