Today is the 925th anniversary of the death in 1087 at the priory of St Gervais outside Rouen of King William I. In case you need a reminder or a summary of the life of this remarkable man there is one here.  The life of him by Prof. David Bates in the Oxford DNB can be read here.

He was a tough, at times ruthless, ruler, but disciplined and energetic - how else would he have achieved success in 1066 - and proved a highly capable ruler, willing to learn and adapt. However one interprets the Norman Conquest it is pivotal to English history and that of the British isles, and William is pivotal the events of invasion, conquest and government in the two decades following. His legacy is remarkable by any standards. I wrote some reflections upon it last year in my post 1066 and All That to which I would refer readers together with its links.

From what we can deduce of his appearance King William was an impressive figure. On the basis of the size of his one surviving thigh bone he was six foot or so in height, and in giving his eldest son Robert the nickname Curthose appears to have mocked him for his lack of height - Robert may have taken after his mother Queen Matilda, whose skeleton reveals her to have been very slight in build. In his later years he put on weight - a contributary cause to his death in 1087, but for much of his life he must have maintained very considerable fitness as a warrior and as a keen follower of the chase. Given his ancestry he may well have appeared more Scandinavian than French, and certainly one of his sons, King William II, was famously red haired, although King Henry I had black or dark hair. If the Bayeux tapestry is to be believed - and it is very detailed and near contemporary - William was brown haired and clean-shaven. 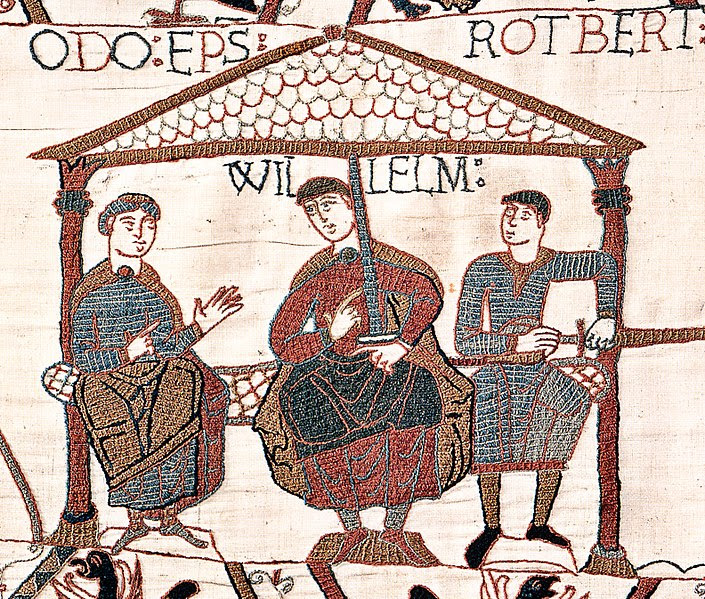 Image:Wikipedia
As I wrote in the post to which I give the link to stand, as I have done twice, before his rather ugly tomb at Caen is, in my experience, a remarkable sensation. The fact of being in the presence of what still remains of this formidable King is somehow still to be very much aware of him and what he achieved. It really is a place to make the hairs on the back of your neck tingle. One may reflect upon the comic horrors of his funeral with the dispute as to ownership of the site and the rupture of the corpse as it was forced into its stone coffin, but much more one reflects on the continuing impact of. the man who lies so near.

The modern tomb of King William I in the Abbey of St Etienne Caen.
The original tomb was destroyed by the Hugenots in 1562.

The statue of the Conqueror in his birthplace Falaise

In the first image, Robert of Mortain appears to be playfully (or otherwise!) poking Bishop Odo on the bum with his sword. Although Odo is seated, his figure is repeated standing to the right of the image.

This is visible in scene 44 of the full tapestry, for which high-resolution images can be viewed interactively at: