Continuing the Scandinavian theme today is the feast of, amongst others, St Eystein of Nidaros (d. 1188). Eystein (also spelled Øystein; latinized as Augustinus) Erlendsson, was a member of a well connected noble family in Norway, and was perhaps educated in Paris and had been chaplain and steward to King Inge Krokrygg before the latter appointed him Archbishop of Nidaros (today's Trondheim) in 1158 or 1159, an action confirmed by Pope Alexander III in 1161 when Eystein was in Rome. Eystein promoted the adoption of canonical life by Norwegian parish priests, officiated at Norway's first royal coronation (that of Magnus Erlingsson, a minor), and fostered the cult of King St. Olaf (buried in Eystein's cathedral), whose liturgical Office he wrote and whose Miracula he expanded. During the years 1181-83, when King Magnus had been dislodged from his throne in a civil war, Eystein was an exile in England. Trondheim has remained the site for Norwegian coronations and inaugurations, and the items of the regalia are preserved there.

Miracles were reported early at Eystein's tomb and he was proclaimed a saint at a Norwegian synod in 1229. Attempts in the Middle Ages to have him canonized papally were unsuccessful. Eystein entered the Roman Martyrology in 2001 with the designation of Sanctus. The present seminary in Oslo is under his patronage

Apart from the Passio sancti Olavi (BHL 6233, 6323; part of Olav's Office), Eystein's chief monument today consists of the chapter house and the lower portions of the transepts of the since much added to and rebuilt Nidaros Cathedral in Trondheim. 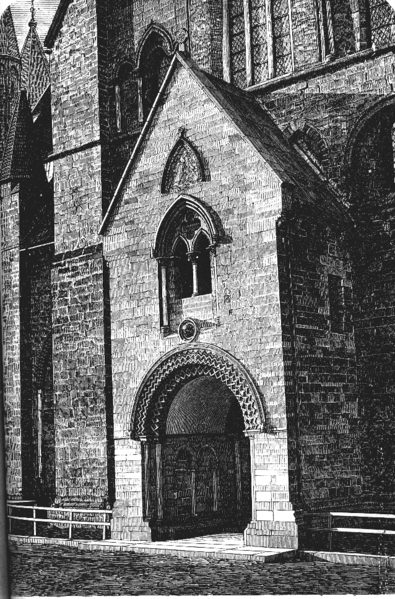 The porch of the north transept of Trondheim cathedral.
A view from 1885

This view of the cathedral from 1857 shows the north transept and, next to the choir, the chapter house (the latter with a neo-romanesque apse added in the nineteenth century) : 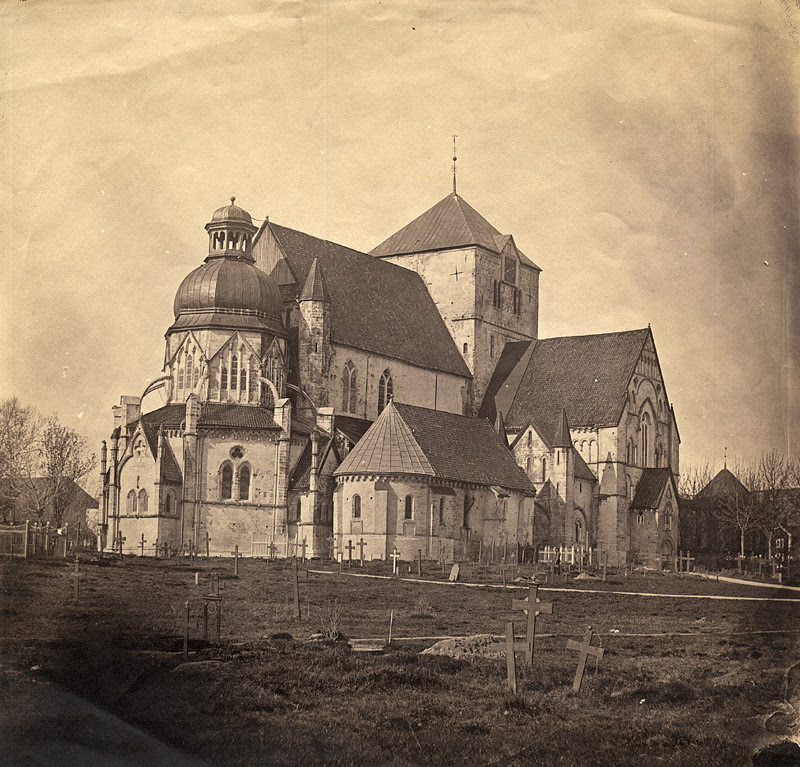 The subsequent restoration and rebuilding work has transformed the building as can be seen in these illustrated online articles about Trondheim cathedral here and here and one about the west front can be seen here.

In the Victoria and Albert Museum there is a late fourteenth-century walrus ivory crozier head with traces of gilding which is of Norwegian origin and portrays King St. Olaf on one side and, on the other a bishop whom the V&A cautiously says "probably represents St Augustine" without further indicating whether the Augustine in question were he of Hippo or he of Nidaros. In view of his promotion of St Olaf's cult, Augustine / Eystein of Nidaros would be a good guess: 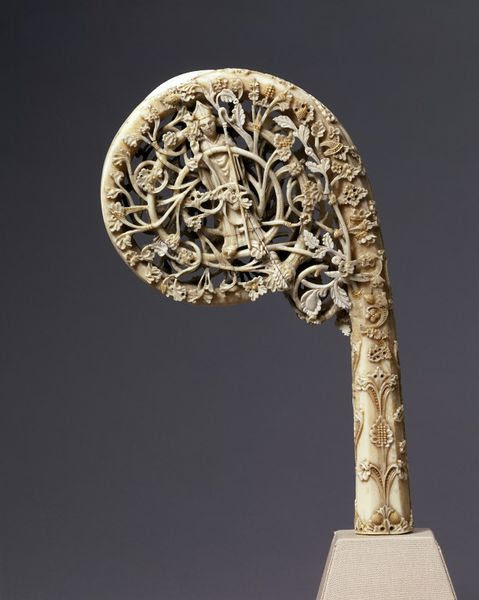 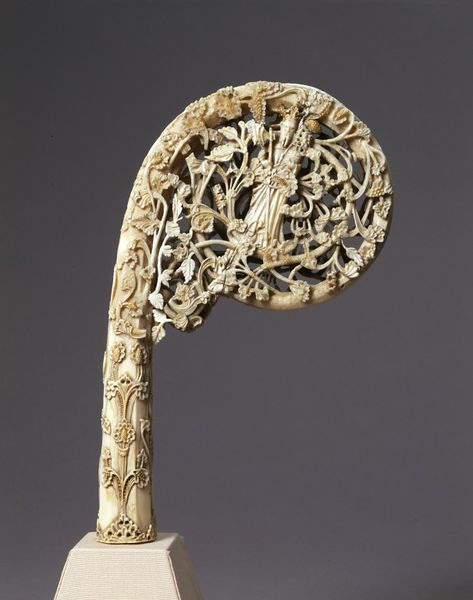 
Quite apart from its indication of the cult of St Olav and St Eystein this crozier is also a reminder of the elegant sophistication of late medieval Norwegian art.

Thanks for this post. As Orkney (where I live) was a suffragan see of the Archbishops of Nidaros, I'm always interested to hear about them.