The fact that Archbishop Laud, about whom I posted earlier today, was a controversial figure, both in his own times and subsequently, is undoubted. There are two contrasting, but not unreasonable, interpretations, both of which make some good points, which can be read here and here.

The Archbishop was described by Fuller as "low of stature, little in bulk, cheerful in countenance (wherein gravity and quickness were all compounded), of a sharp and piercing eye, clear judgment and (abating the influence of age) firm memory."

The presentation of his readily recognisable image in picture and word expressed the views of others about him.

An engraving by William Marshall is unsympathetic in showing the Archbishop in his later years after his fall from power
Image:npg.org.uk A hostile cartoon of 1644: The Devil offers a horned Archbishop Laud a cardinal's hat.
Presumably this is to go with his mitre - something in itself which Laud would never have worn.
The figure on the left is presumably an allusion to the Gunpowder Plot of 1605, whilst that on the right proffers a biretta, rosary,a cross and surpliceas well as a bag of relics or for a pyx.
The items on the table may be meant to be money or Hosts.
Image:gutenburg.org

Another hostile pamphlet from the time of the Archbishop's execution
scholarsresource.com 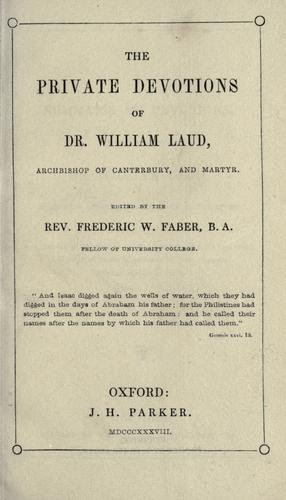