My posts The Queen of Denmark and Danish Jubilee celebrations about the fortieth anniversary of the accession of Queen Margrethe II prompts me to post something about the oldest of the Orders of the Danish Crown - the Order of the Elephant.

Believed to have been initially founded around 1462 the Order of the Elephant was to be the Danish version of the two most famous pre-existing European Orders, the Garter (1348) and the Golden Fleece (1430), and can be seen as part of that process which led to the creation of royal chivalric Orders across the continent in the late middle ages - examples include those of the Annunciation in Savoy, the Dragon in Hungary, the Star and later that of St Michael in France, and, probably, the Thistle in Scotland.

Why the Elephant? Elephants were no more common in fifteenth century Denmark than they are now. The probable reason why the elephant was chosen to symbolize the Order was that the battle elephant was used as a symbol of the champion of Christianity, roused by the sight of Christ's blood. In addition the elephant was the symbol of chastity and purity. Medieval typology found several symbolic links between Christ and the elephant, and it is significant that the central medallion of the star of the Order bears the cross as its device. In the 1470s King Christian I had the Order confirmed by the Pope.

However with the advent of the Lutheran reform to Denmark it fell into semi-disuse, as indicated in this online article about the Order. However the Order does appear to have continued to be bestowed, as in the pictures below, and appears on coin portraits of the Kings, so the revival of 1693 appears to be a revival of an existing Order rather than the revival of an entirely dormant one. 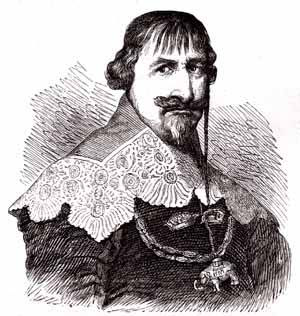 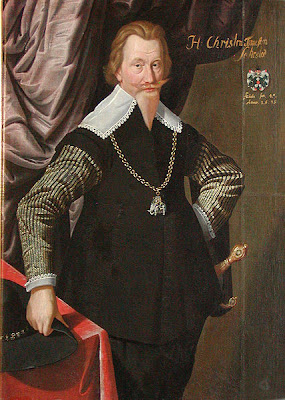 Christen Thomesen Sehested,
A painting of the 1600s, before the re-establishment of the Order in 1693
artist unknown 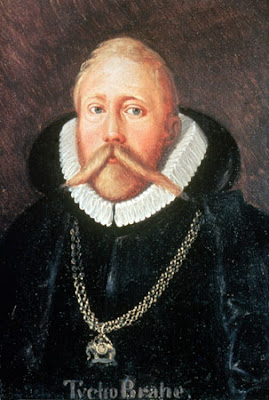 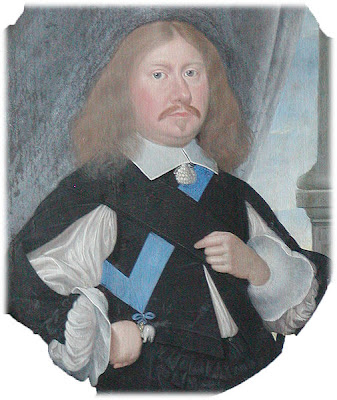 The statutes establishing it as it is today were laid down by King Christian V on 1 December 1693. The King's new system of orders of chivalry was a means to create a new structure of social rank in Denmark. With the introduction of absolutism in 1660, the old nobility had been stripped of its privileges, but the nobility was still a factor of political and economic importance. To break its power, the King sought to create a new elite of burgesses and foreigners who could be useful to the King. Alongside the Elephant was the Order of Dannebrog founded by the King in 1671.

As with the Garter, Thistle and Patrick in the United Kingdom, or Orders such as the Golden Fleece and the Holy Ghost the Order consists of only one class, that of Knight. The riband is pale blue and, like the Garter and the Thistle, is worn over the left shoulder - most Orders have the riband over the right shoulder.

Since 1693 there has been the Chapel of Orders in Fredriksborg Palace, where the arms of recipients of the Danish royal orders are displayed on the walls. The chapel witnessed eight coronations between 1671 and 1840.

Today, the Order of the Elephant is awarded according to the statutes worked out under King Christian V in 1693. The statutes were amended by King Frederick IX on 9 April 1958 by a Royal Ordinance, so that both men and women may be awarded the Order. 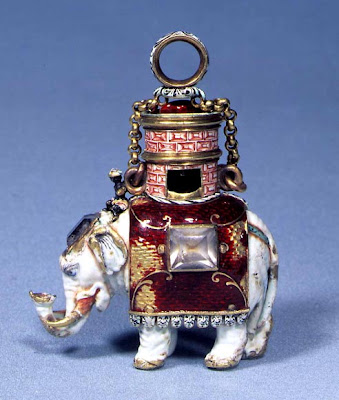 This Elefantorden - Order of the Elephant -
belonged to the Danish King Christian V (1646-1699)
This badge was made in 1670 by Paul Kurtz, and
the King had the castle on the elephant's back turned
into a whistle...he used it while hunting north of
Copenhagen in Dyrehaven. 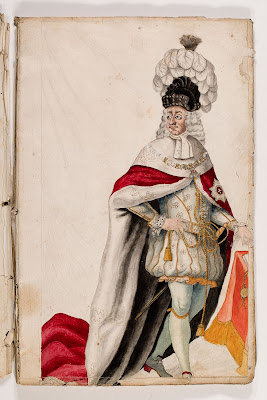 King Christian V in the robes of the Order.

These are very similar in design to the contemporary robes of the Order of the Garter and the French Royal orders. The red mantle with white lining uses the national colours of Denmark 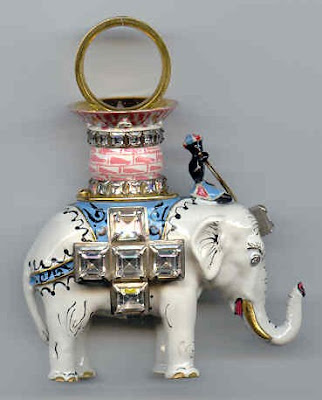 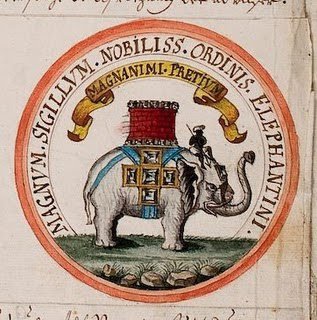 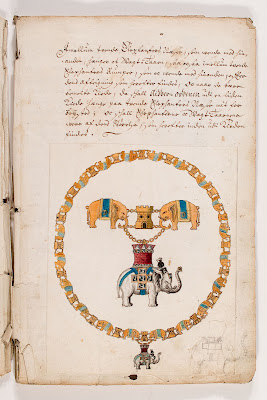 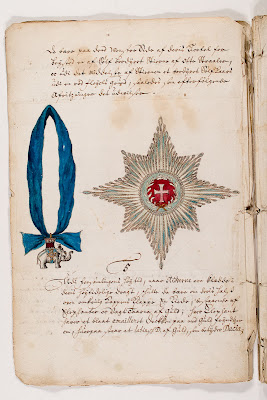 The statutes of The Order of the Elephant December 1st 1693

Collar and badge at Rosenborg Castle