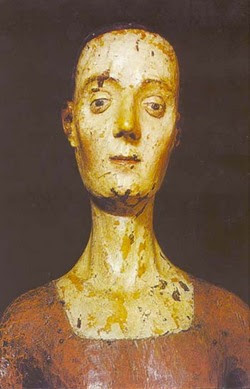 Queen Catherine's funeral effigy at
Westminster abbey as it is today

Image: findagrave.com
The article on her life by Michael Jones in the Oxford DNB can be read here.

She was Queen consort and then Queen mother or dowager in the lifetime of Bishop Richard Fleming, who attended her coronation at Westminster on February 23 1421, and who took part in King Henry V's funeral in the autumn of 1422.