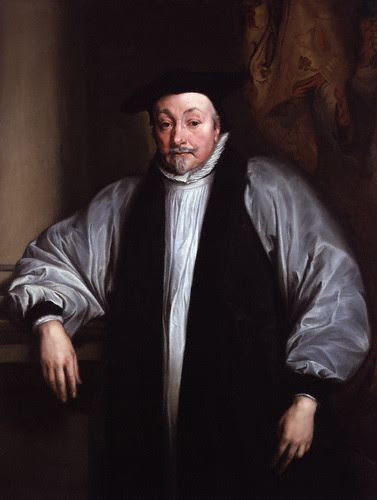 Archbishop William Laud was judicially murderd by the Long Parliament on January 10th 1645. It is in no way unreasonble to see him as a martyr, although officially the Church of England has never recognised him as such - I do n't think he made it to the rather curious calendar contained in Common Worship in 2000.

He has, of course, always been esteemed by High Anglicans. Whether he can really be classed as an Anglo-Catholic is open to debate. I think he is more what one would term a High Anglican or a Catholic Anglican, and believed in the branch theory. His Arminian (if that is what it was) base does not, I think, quite follow on from the Elizabethan Church Papists, although I am not sufficiently versed in the subject to make a definite assertion as to the influences that formed him. He did of, of course, belong to St John's College, here in Oxford, which had strong Papistical inclinations stemming from its founder Sir Thomas White.

To call him an Anglo-Catholic or Romaniser is, perhaps, to fall for the arguments of his opponants - including those of my odious fellow Orielensis William Prynne - and not to see what he sought to do. His vision was an Anglican one of a reformed, purified Catholicism for the realms of his King. In obedience to the pursuit of that vision that he was a good and great man - arguably the greatest Archbishop of Canterbury since 1558.

The post 1660-62 Church of England was not operating in quite the way he had, but the vision he and others had encouraged, even if it became a minority interest, survived to provide a key element in the thought of the founders of successive Oxford Movements. Without Laud, Andrewes, Wren, Cosin and others there would have been neither Wesley and 'Methodism' in the 1730s, still less Keble, Pusey, Foude and Newman in the 1830s. Anglo-Catholicism, in the outward forms as we used to know it, might have been very different from Laud's version, but Laud gave it an historical pedigree which helped legitimate it.

There is something fitting (dignum et justum est) that it was in the church over whose south porch stands the statue of Our Lady and the Christ Child whose very existence was used as one of the ridiculous charges to destroy Laud in 1644 that the Oxford Revival of 1833 was launched.

If you are visiting Oxford do not fail to go and see Canterbury Quad at St John's College, built in the 1630s by Laud, and one of the greatest buildings in the city, redolent of those tranquil, halcyon, visionary years of Court High Anglicanism in the middle of the reign of King Charles I - a truly moving place to be when one reflects on the storm of destruction that was to follow. 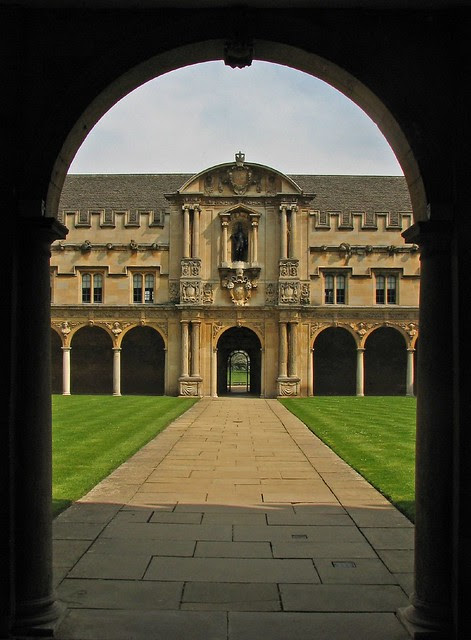 Photo by fr Laurence Lew OP on Flickr
St John's still possesses vestments he gave to the college, and the purple scull cap he wore to the scaffold, and these and other treasures are displayed, and can be seen at advertised times.

In 1660 Laud's body was reinterred in the chapel of his beloved St John's. When I was a regular worshipper at Pusey House, which is almost opposite the college on St Giles, I developed the conceit that poor Laud must be not only turning, but positively spinning in his grave over the current state of the Church of England. I came to envisage the Pusey faithful assembled in the choir stalls one day at 1662 Mattins or Evensong when one of the paving stones would be lifted from underneath, pushed aside and a pair of lawn clad sleeves would lift out the Archbishop's head, and then he would lift himself out and join us in reciting the Office - his sepulchral rotations had finally brought him under the road to a safe haven with us.

A revised version of a post from this day last year.