After Mass and lunch in Oxford yesterday I went up to London to attend the Ordinariate's Solemn Evensong and Benediction to mark the first anniversary of their erection as part of the Church. This proved to be a splendid and striking event, and which proved to be very well attended.

Now let us be clear - St James Spanish Place where the service was held is, as one might say, a seriously tasty church - fine gothic revival architecture, splendid furnishings and all those Spanish royal connections. It is the sort of church that reaches parts other churches don't. So we were off to a good start with such a location. 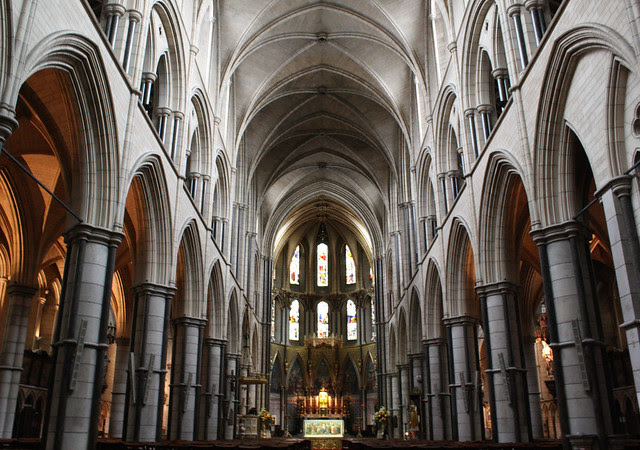 Image: Paul Lew on Flickr
Furthermore this was a great reunion with many friends - long standing fellow converts from Pusey, more recently acquired Oxford Ordinariate friends, cradle Catholic friends, and some faces from years ago, plus new friends. In other words, the usual suspects were there. I was hailed in the street as I walked to the church by one freind, and on the steps of the church beforehand and afterwards there was a buzz of greetings, enquires as to what one another was doing and swapping of information and banter.

The officiant was the Ordinary and amongst those sitting in choir was Bishop Peter Elliott, the Australian bishop responsible for the setting up of an Ordinariate there, and the new US Ordinariate was commended to our prayers.

The grandeur of the setting was matched by the music - Howells, Parry - "I was glad"always makes the hairs on the back of my neck rise - and Stanford - and its performance. In the music and the staging of the liturgy one saw what I consider the essence of "patrimony" - a way of doing liturgy and worship rather than specific forms. As I have written before I really do prefer traditional Vespers to Anglican Evensong, but the similarity was close.

After a sermon from Mgr. Newton which quoted Bl.John Henry Newman writing in 1848 to the father of the future Cardinal Bourne, as in the Apologia, of his spiritual relief at finding himself secure within the Catholic Church and applied it to the members of the Ordinariate, and their gratitude for all that has been achieved there was a procession of the Blessed Sacrament and Benediction. Escorting the Sacrament as canopy bearers and supporters were Knights of Malta - those in Solemn Profession, those in Simple Profession and Knights of Grace - an impressive display of support for the Ordinariate.

In addition to those in the church I had a strong sense that we were joined in communion with those who rejoiced upon a different shore at what has been achieved and is being achieved through the Ordinariate.

Whatever the size of the individual groups as they start out on their pilgrimage of faith, here, gathered together was positive evidence of personal commitment and the support of many others within the Catholic Church.

The reception afterwards packed out the undercroft of the church in the best ecclesiastical tradition - and after a few minutes there I went off with friends to the Angel in the Fields, a hostelry close to the church which provided us with excellent Tadcaster beer to sustain and enliven our conversation.

All round a jolly good evening and very well worth the effort to go up to London.

Photographs of the service were being taken and will doubtless appear on the web.

A lovely report of a beautiful evening - what the Anglican lost in tradition and beauty will never be replaced.