The other Sunday I found myself sharing a pew at Mass at the Oxford Oratory with a visting American academic. Talking afterwards I found that he was Dr Henry M. Miller, Director of Research at the Historic St Mary's City project in Maryland, of which I had read something a while back on the internet, and that he was spending a sabbatical research year in Oxford attached, through the Centre for Medieval and Renaissance Studies, to Keble college.

The importance of St Mary's City, of which none of the original buildings survive above foundation level, is that it was the first capital of Maryland, established as a private Catholic colony in 1634 by George Calvert, the first Lord Baltimore, and with freedom of religion. After it was taken over as a Crown colony in 1694 that position changed, and in 1704 there was an Act to deter the growth of Popery. Nonetheless this was the first such experiment in religious pluralism, and the chapel, of which the one built in 1667, replacing one destroyed in the Civil War, and recently reconstructed on its foundations under Dr Miller's leadership, can claim to be the mother church of English Roman Catholic North America. 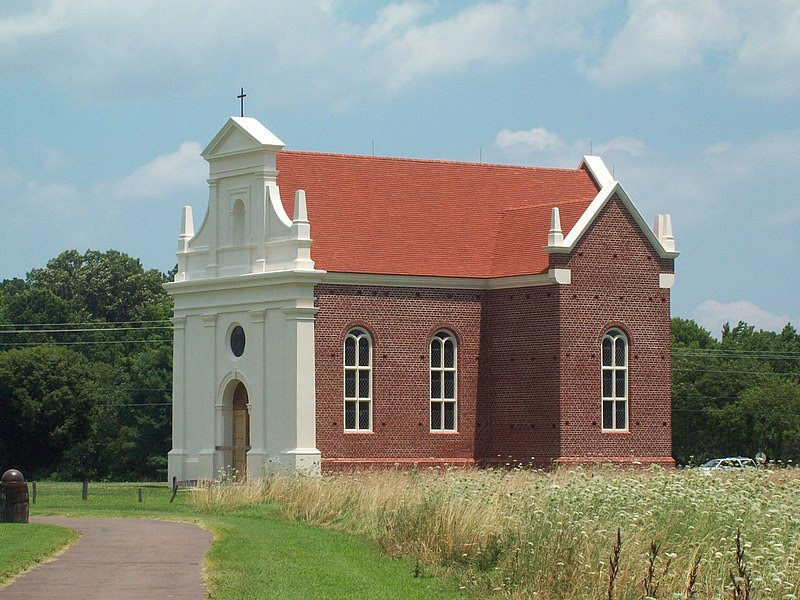 The reconstructed church from 1667

Image:Wikipedia
St Mary's City was abandoned in favour of Annapolis as the capital in the early eighteenth century and the buildings dismantled, but Maryland retained a strong Catholic population and it was in Baltimore that the first Catholic diocese of the new USA was to be established.

As we talked I mentioned the fact that some years ago I had visited Kiplin Hall in Yorkshire, the country house built in the 1607-11 by the future Lord Baltimore. It is a house which is not as well known as it deserves to be, both for its architecture and its connections with the foundation of Maryland.

Dr Miller and I finally discovered that we are neighbours, living in the same development of flats in Oxford.

There is an online article about St Mary's City here, and another background article here.

The Oxford DNB life of the first Lord Baltimore can be read here; that of the second baron, Cecil Calvert who was the effective founder of the colony, is here. Biographies of later members of the Calvert family can also be found therein; the life of the fourth baron is here, that of the fifth here, and that of the sixth and last baron, a libertine who died in 1771, here.

The website of the St Mary's City project can be viewed here, complete with Dr Miller's blog on his life and research in contemporary Oxford.

The website for Kiplin Hall, and an account of its history and owners can be seen here. The house seems to have been a statement as to his success by George Calvert in his home area, and modelled in part on his patron Robert Cecil Earl of Salisbury's great house at Hatfield.

Image:panoramio.com
The state flag of Maryland, adopted in 1904 and unique in its character amongst US state flags, is the banner of Lord Baltimore, with the quartered arms of the Calvert and Crossland families.

What an interesting article. I always thought the Maryland flag had such a unique design, now I know why.

I love the Maryland flag.