Today is the feast of St Martin, the first non-martyr saint. Last year I posted in my article St Martin about some aspects of his cult.

There is an article on his ancient Basilica in Tours, sacked in 1562 and wantonly destroyed in 1793, and on its modern replacement here, which also has illustrations of two fine thirteenth century glass panels illustrating scenes from his story. 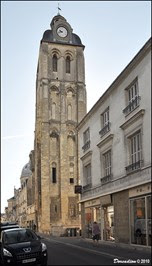 La Tour de l'Horloge.
One of the two remaining towers of the medieval basilica - the
street runs through the site of the great church.
The dome of the modern replacement can be seen behind it.

Image: waymarking.com
It is an opportunity to look at some more historic images of the saint, who has been very popular with the faithful, and who, as a consequence, often appears in the art they commissioned. The choice of scenes, as in the glass at St Martin's in York I linked to last year, indicates the awareness of the range of stories about St Martin and of the Life by Sulpicius Severus which recorded them.
St Martin was seen by the Franciscans as a significant anticipator of the life of St Francis, as expounded in a talk earlier this year at the Oxford Centre for Franciscan Studies. Here from the cycle of paintings by Simone Martini from 1313-18 decorating the Chapel of St Martin in the Lower Church ar Assisi is the death of St Martin: 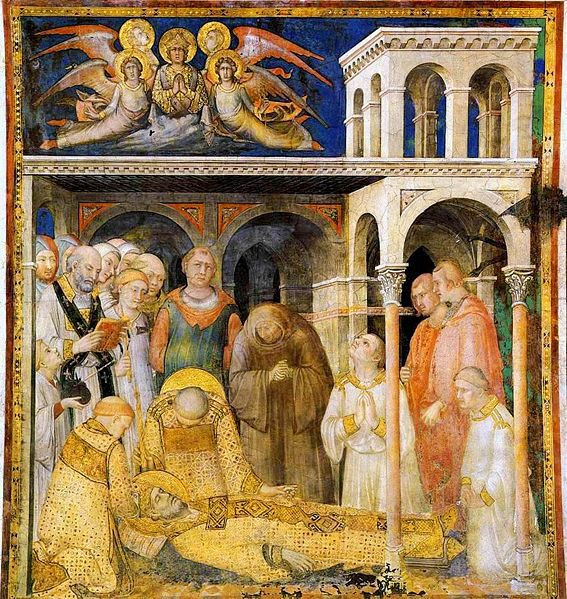 The details of the vestments repay some study - they may not be those of the late fourth century, though they are perhaps not that different, but they do definitely indicate the splendour of the early fourteenth century.

The other paintings can be vioewd through links on the Chapel of St Martin page.
This painting, being now in Australia, is perhaps less well known in the northern hemisphere than it deserves to be, with two of the most popualr saints of the middle ages as depicted by a mid-fifteenth century artist. It is also interesting for its depiction of contemporary vesture, both clerical and lay:

St Martin and St Nicholas
German c.1450
Art Gallery of South Australia, Victoria
Image: friends-of-art
The following image I have included as a depiction of the celebration of Mass in the mid-fifteenth century and the setting and appurtenances of worship: