On Saturday afternoon I went up to the LMS Requiem in Westminster Cathedral celebrated by Bishop Alan Hopes. There is an illustrated report by the LMS Chairman in his blog post Annual Requiem from which I have copied two photographs. In the report Dr Shaw has a link to his impressive Flickr set of images of the Mass. 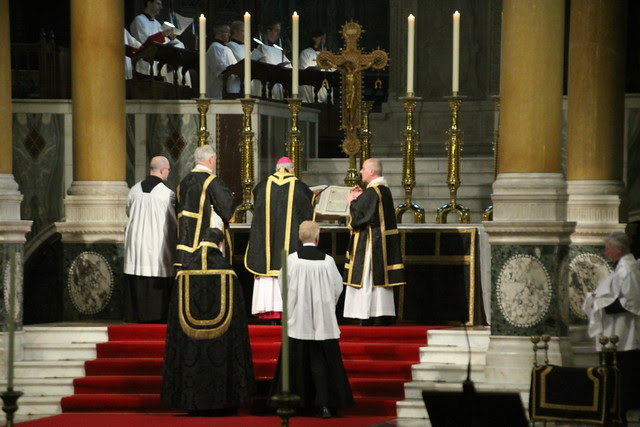 At first I thought the attendance was relatively small, but realised at communion that many of the places behind me had filled up to provide a good congregation. The sanctuary of the cathedral provided a fine setting for the liturgy with its sombre magnificence - although I did notice that someone at the cathedral had omitted to change the altar candles to unbleached wax.

It is a few years since I was able to attend the Requiem, and I was pleased to see that the absolutions at the catafalque are now performed as routine on this occasion, which did not happen last time I was there. 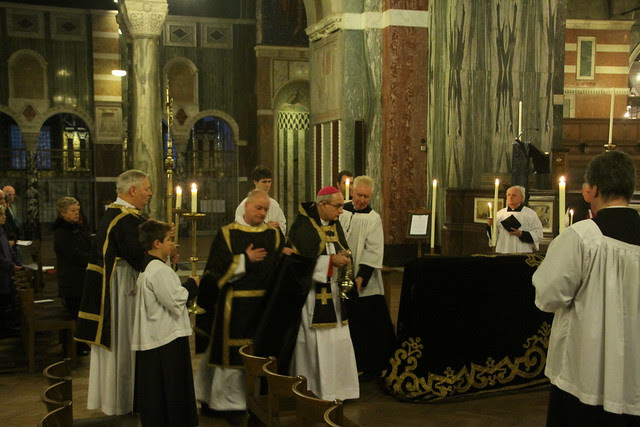 It was perhaps unfortunate that CIEL were having their annual Mass at midday, followed by a speaker meeting at Brompton on the same day. One of my friend managed to attend both Masses, but a bit more liason might well result in more people getting to both of these occasions and showing the extent of support for the Extraordinary Form.

Afterwards there was an opportunity to meet up with various friends and to go off for a drink and a meal before travelling back to our various homes.
Posted by Once I Was A Clever Boy at 23:11