Depending on whether one follows his younger contemporary Roger of Hovedon who assigns his death to November 22nd or Thomas Stubbs in the fourteenth century, who gives November 26th (our old friend scribal error may explain it - reading xxii as xxvi) hereabouts is the anniversary of the death 830 years ago in 1181 of Roger of Pont L'Evêque, born in Normandy about 1115 and who had been Archbishop of York since 1154.

The Oxford DNB life of Roger by Frank Barlow can be read here. There is a similar online article here, which mistakenly places his burial at Durham, not York.

As Archbishop he is perhaps most famous for his being seen as an opponent of Thomas Becket, not least over the respective claims of the two archiepiscopal sees. As a friend and I recently agreed Roger was perhaps unlucky to have as his opposite number a future martyr for the liberties of the Church, and to have clashed with St Thomas over the exclusive claims of Canterbury to crown the English monarch. Roger's coronation of the Young King Henry on June 14th 1170 was the final breach between the two men.

Given other circumstances Archbishop Roger might have been remembered as a great servant of church and country and as a magnificent builder and patron. Little of what he built or knew now survives.

York Minster had been badly damaged by fire in 1137 and as Archbishop Roger set about remodelling the choir and crypt in 1154. The new eastern end of the cathedral was completed in 1175 producing an aisled choir, with its own transepts 40 feet longer than its predecessor. The eastern end was squared off and the whole choir raised over a large crypt. This may have been inspired by that at Canterbury which he would have known as Archdeacon to Archbishop Theobald.That is all that survives, as the choir was replaced after 1361 by Archbishop Thoresby's even grander structure. Even then its survival was accidental - the top of the vault was hacked away, and the crypy filled in until it was excavated after the 1829 fire. Part of the rubble from the old choir was used to create the eastern crypt as aplatform for the new fourteenth century altar and shrine of St William. What survives of Roger's crypt can now be viewed as part of the Minster undercroft. Archbishop Roger also extended the transepts by 40 feet and added two western towers, which disappeared with the early fourteenth century rebuilding of the nave.

The remains of Archbishop Roger's crypt at York

Image: York Minster website
In the north aisle of the nave there survives one panel of glass which is thought to have originated in Archbishop Roger's choir glazing. It is a figure from a Tree of Jesse:

Image: travelpod.com
To the north, behind the Minster, there survives part of a cloister arcade from the Archiepiscopal palace which is normally ascribed to him, as was the foundation of the collegiate church of St Mary and the Holy Angels for his clerks and which adjoined the palace gate. With the expansion of the Minster nave, this became joined to the cathedral in the early fourteenth century, but was a casualty of the reformation; its foundations were uncovered in the 1960s restoration. 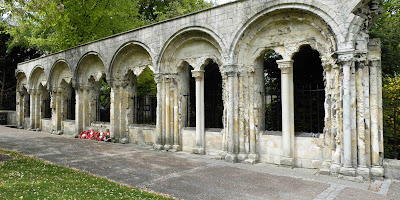 The remains of the palace cloister 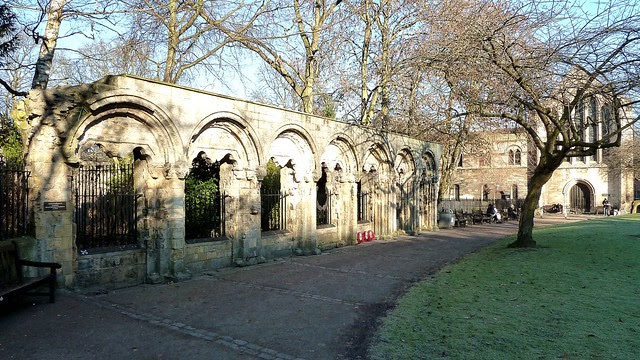 Of the three great daughter churches that functioned as pro-cathedrals in the diocese of York his work of the 1170s at Ripon survives in some nineteenth century reconstruction, but at Beverley anything he did has totally disappeared. At Southwell the church appears to have been completed just before his time, and he would doubtless recognise it, even with its great perpendicular window. 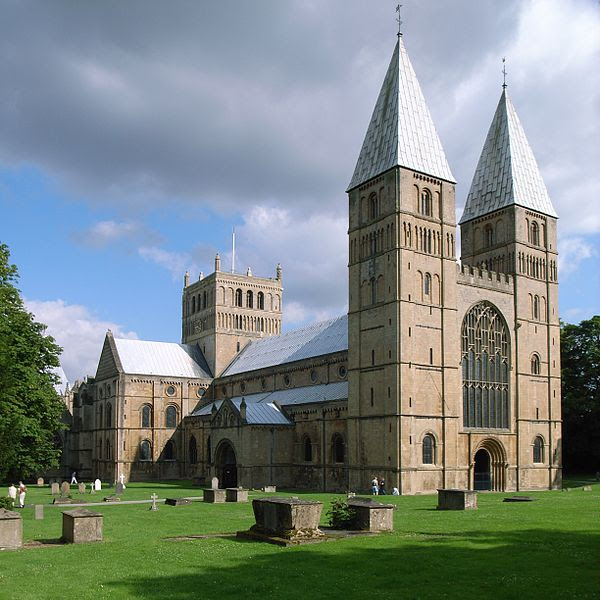 Image:Wikipedia
Probably the only other church he would recognise is the fine twelfth century nave of the church on the archiepiscopal manor at Sherburn in Elmet, which was sometimes used by Archbishops for ordinations and meetings.
There is more than a whiff of scandal attached to Roger. According to a letter attributed to John of Salisbury, who first reported this story in 1172 two years after the death of Thomas Becket, and nine years before Roger's own death, as a young and ambitious clerk in the household of Archbishop Theobald of Canterbury, and his Archdeacon from 1148, Roger was involved in a scandal involving a homosexual relationship with a boy named Walter. After Walter made the relationship public, Roger reacted by embroiling Walter in a judicial case that ended with Walter's eyes being gouged out. When Walter then accused Roger of responsibility for this crime, Roger persuaded a judge to condemn Walter to death by hanging. Becket supposedly was involved in the cover-up afterwards, by arranging with bishops Hilary of Chichester and John of Coutances for Roger to swear an oath that he was innocent. According to John of Salisbury, Roger then went to Rome in 1152 and was cleared of involvement by Pope Eugenius III. John of Salisbury further alleges that it was only after bribery that the Pope cleared Roger. Frank Barlow points out in his biography of Becket that while Roger was accused of these crimes, and may even have been guilty of some sort of criminal homosexuality, John of Salisbury, a noted partisan of St Thomas, could almost certainly have had the motive for bringing up this story in 1172 as a means of defaming Roger.The story would naturally have put Roger in the worst possible light. The story does not put Becket in too good a light, and if it is not true or exaggerated then John of Salisbury, distinguished scholar and churchman that he was, does not look so good either- if he actually wrote the letter in question.

The story, whether true, exaggerated or false, is better than most fiction - once again it would make for a good novel or drama, let alone modern newspaper style headlines "Archbishop of York arranged to have ex Gay-lover blinded and hanged" would be quite a good line - with or without phone-hacked evidence.

More seriously the story is a reminder that there have always been scandals and alleged scandals in the Church. That is not to minimise them, but it is also to say that we need to be sure when we pass judgement. The truth or otherwise about Archbishop Roger and Walter is now, presumably, unknowable. Contemporary allegation of scandal should be examined with the utmost seriousness, caution and care.