Ordination at the London Oratory 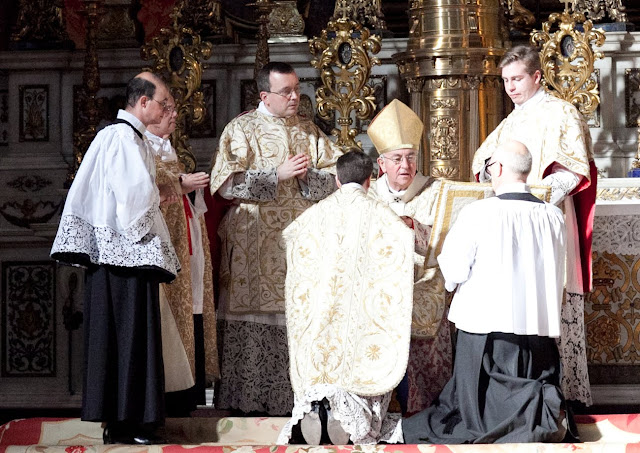 I have met Fr Edward and know his parents, who live in Oxford, and his brother, who was one of the Archiepiscopal vimperers.

It was also good to see on the photographs my fellow Orielensis, Br Stephen Morrison, now a Norbertine in Chelmsford, who was Sub-Deacon. There were other friends and familiar faces amongst the clergy and the Brothers of the London Oratory who were assisting.

Fr Blake has some reflections on the liturgy in his post An Authentic Celebration According to the Roman Missal.
Posted by Once I Was A Clever Boy at 16:45

What is an Archiepiscopal vimperer? I looked it up but could find nothing except a reference back to you blog.

A vimper is a cloth worn over the shoulders and used, rather in the manner of a humeral veil, to hold the mitre and crosier of a major prelate. So a vimperer is one who wears a vimper, and he is archiepiscopal if he is doing so on behalf of an Archbishop.