Today is the 175th anniversary of the death in exile in 1836 of that oft-maligned monarch King Charles X of France. 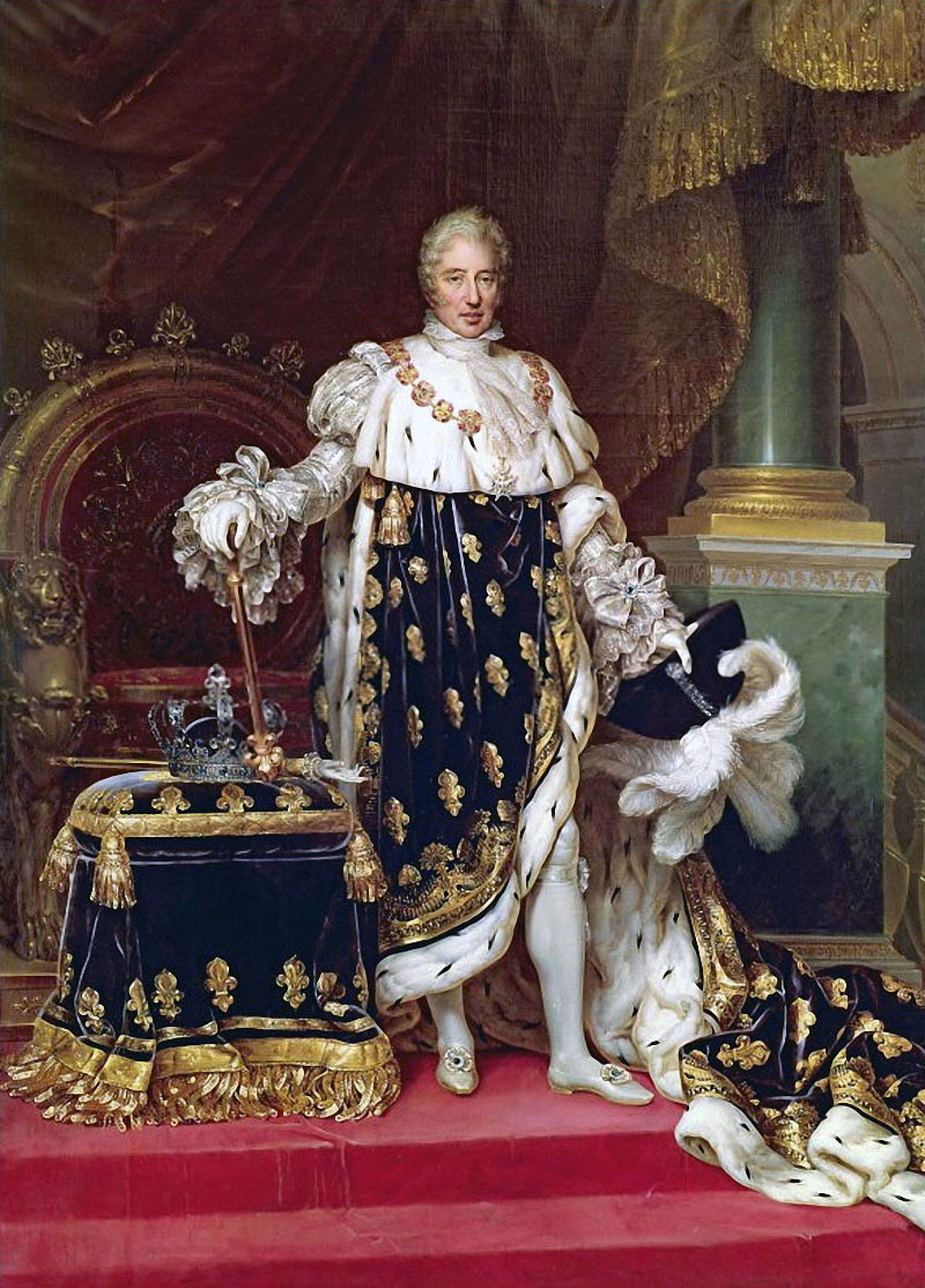 Image:Wikipedia
There is an online life of the King here and an account of the revolution which led to his exile here. This was, in many ways, yet another Parisian 'Day of the Barricades'. His actions in July-August 1830 are reminiscent of those of King James II in 1688. 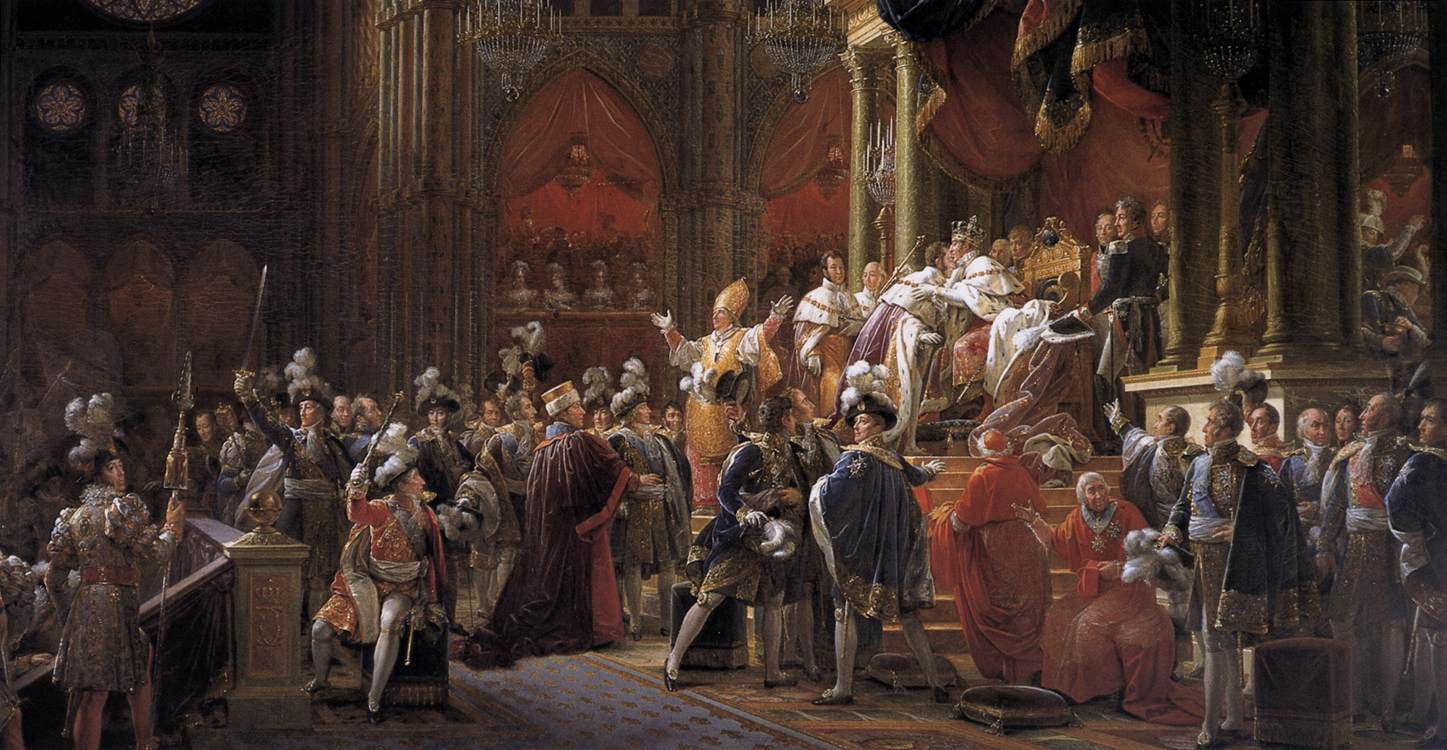 He is often remembered for his Coronation as King at Rheims in 1825, fifty years, a revolution and a world war away from the previous one in 1775 of his brother King Louis XVI. It can also be seen as a pendant to that of King George IV in 1821 at Westminster. This was the decade of lavish coronations, alas never repeated in France, and regrettably curtailed in Britain by King William IV, and gradually re-enhanced in the twentieth century, but still shorn of the Westminster Hall ceremonies and banquet.

King Charles X in his Coronation robes.
The similarity to clerical vestments in the robes is clear.
Jean-Auguste-Dominique Ingres 1829-30

Image:terminartors.com
As King he is often seen as typifying the verdict that the Bourbons had "Learned nothing and forgotten nothing", which may be more memorable for being a witty remark that sums up a perception rather than anything else. He is also compared with King James II and VII as having undermined the consensus achieved by their brothers and predecessors.
It is true that some of the political moves under his rule did indicate a willingness to move France in a direction that looked back to the Throne and Altar view of the Ancien Regime, and with hindsight, the historian's way of knowing better than the people at the time did, one might have advised a different approach. However the central issue facing any French government then, and subsequently, was how to manage and reconcile the legacies of the years 1789-1815 in the light pf the country's past and present.

That achieving that proved beyond the King may be true - but then it has proved beyond that of all subsequent systems in France - July Monarchy, Second Republic, Second Empire, Provisional Government, Third Republic, Etat Francais, Fourth Republic, Fifth Republic ... all have failed to engage the whole consent of the nation. King Charles X and his ministers might be criticised for moving as they did, but would others have fared better, even if they had pursued very different policies?

There are interesting parallels between France and Britain in the 1820s that go beyond two spectacular coronations. Both were attempting to find means of reconciling tradition and change in a new era. Political elites and groups sought to maintain traditional rule or to effect change. Issues such as censorship, policing and crowd control were central to the period.

Ecclesiastical matters, symbolised in France by the law on Sacrilege were in Britain to be centred on Catholic Emancipation and later on position of the established Church. In France it was on July 18th 1830 that Saint Catherine Labouré had, at 140 Rue du Bac, the first of her visions which led to the establishment of the Miraculous Medal . In this first vision she was shown the downfall of the King, and told that "God wishes to charge you with a mission. You will be contradicted, but do not fear; you will have the grace to do what is necessary. Tell your spiritual director all that passes within you. Times are evil in France and in the world."

France failed to avoid an upheaval, whereas Britain made the moves to widen the pale of the Constitution that avoided violnce. The outcome was different, but the issues similar. In either case probably only a few individuals made the difference, but for France the rabble rousers could appeal to the spirit of revolution, with disastrous results.

The 1830 revolution made a considerable impact on the founders of the Oxford Movement - the events in France shocked them and led them to fear what might happen here under a government pledged to change aspects of the constitution, and not least the risk to the Church of England - the burning of the palace of the Bishop of Bristol in a riot over Parliamentary reform in 1831 indicated the risks. That concern fuelled their ideas leading to the events of 1833. As a fear or dislike it stayed with them - in later years John Henry Newman travelling through Paris drew down the blinds in his carriage to avoid seeing the revolutionary tricolour flying over buildings.
As far as I am concerned the very regrettable events of 1830 mark the end of all legitimate rule in France, and not just that of Legitimist rule. King Charles X may have been blinkered in his views by the experiences of the years after 1789 and the fate of his family and country. It would have been hard not to be. That does not deny legitimate validity to what he sought to do for France.

Do you not consider the Orleanists legitimate?

Only after the death of King Henri V, and then they were not, alas, able to exercise authority within their realm. They are, I consider, the legitimate line thereafter, so I would consider King Henri VII rather than King Louis XX to the French monarch at present.