In addition to being All Saints Day November 1st is the feast day of a number of individual saints, including St Austremonius, traditionally held to be the first Bishop of Clermont Ferrand, and whose shrine church is the basilica of St Austremoine at Issoire in the Auvergne.

I have not had the good fortune so far to visit it, but judging by photographs the present church is a fine example of twelfth century architecture from the region, as can be seen in the links. I am particularly interested in it because of its internal decoration. 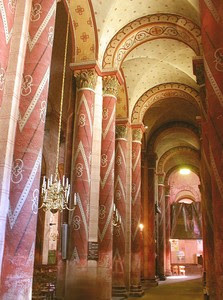 The nineteenth-century restoration restored or renewed the colour scheme of the building as first completed. This is not to everyone's taste, but it does appear in essence that it is what was intended and executed.

Personally I accept that it is what the patrons and builders intended, so who are we to fault them? If the colours are not as they would have been it is regretable, but still better than bare stone or plaster - which was not intended

A whole series of expandable images of the basilica and its decoration can be viewed here and here and from the Art Roman site here.

A series of posts the other year on the Medieval Religion discussion group drew out comments such as:

When I visited Saint-Austremoine d'Issoire, the neighboring curates sniffed at two things: the plaster capitals and the truly, to our eyes, garish painting of the walls. When I objected rather blandly that medieval churches were painted after all, the horrified response was "But not like that!" After all this discussion.... I'm wondering now if Issoire is an example of exactly how churches were painted.
and

Although one can never be sure about the colour quality of pictures on the web, the colour red on the pillars seems to me to be too modern and bright. That colour was not known in the Middle Ages as a pigment. It was used in dyes for broadcloth, although this was usually a bit more orangy. On the other hand the figures on the capitals are too light. The colours are mixed with too much white and so appear to be 'pastel' hues.
and

While there are some churches of substantial size which have extensive painted programmes (e.g., Issoire -assuming that the restoration reflects the original reality- St. Savin-sur-Gartemp ,more telling might be the quite large number (~100?) of very, very modest minor churches which, from what we can see of what remains, were also given extensive mural programs...and what are we to do with Chauvigny - assume that the painted ashlar reflects the original decor, given the extensive sculpture and the painting of the columns?

There is a page of links to some photos of modest churches, in just one small region of France, which appear to have had extensive murals here ; note that all save St-Benny (which has no surviving paint, though it surely originally had it) are modest churches.

Lavardin is a "normal" sized "parish" (priory, actually) church, while Montoire (also a priory of Marmoutier) is just plain tiny, as is the spectacular Berzé-la-Ville. Berzé is exceptional, not because of its size and the quality of its painting, but because of its origins - it was the chapel of a vacation residence of the Abbot of nearby Cluny (and we may reasonably assume that its paintings reflect, in their style and iconography, what was to be seen in the Mother Church). Although only the paintings of the apse survive, there is no reason to believe that the whole of this modest building was covered with murals as well.

The point is, if the most modest of churches were given extensive, high quality decoration, it is simply absurd to think that the larger churches (which "owned" the smaller ones, after all) were not given the same treatment - and, methodologically, that we cannot use them to reconstruct what some of those mother churches looked like themselves, most of them having been subsequently rebuilt. [Adapted from the original post]
It is clear that fashions changed in decoration then as now - a lighter style came in with the early Gothic, followed by lavish colour schemes in the fourteenth century - the style A.W. Pugin revived and adopted for many of his churches - and a more restrained style appeared again in the fifteenth century - when larger windows reduced the wall space available to be painted.

What we are presnted with is a whole scheme, not a few fragments, and one that integrates sculpture and the architecture with the painted surfaces. Thus ground colour and stencilling provides the frame and context for figurative work. This is not putting a coat of paint on the walls- it is theology and liturgy expounded and integrated in a piece of Heaven on earth. To enter the building is to enter the presence of God and meet him in His sacraments

Issoire may be gaudy, but so, in many ways was the age that produced it. So, come to think of it, and in its own way is the Sistine Chapel, and no-one, other than a fully paid up Iconoclast, wishes it other than it is. 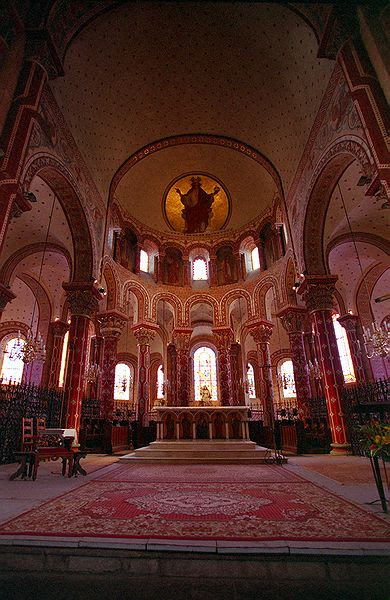 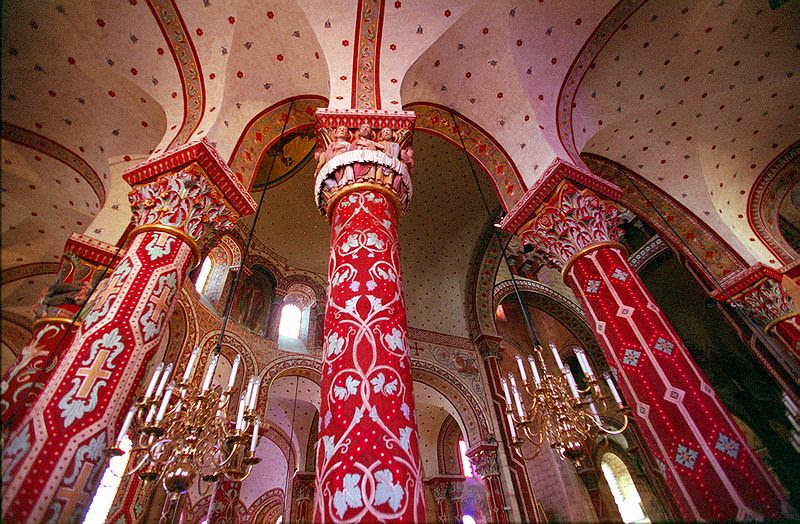 A view from the ambulatory 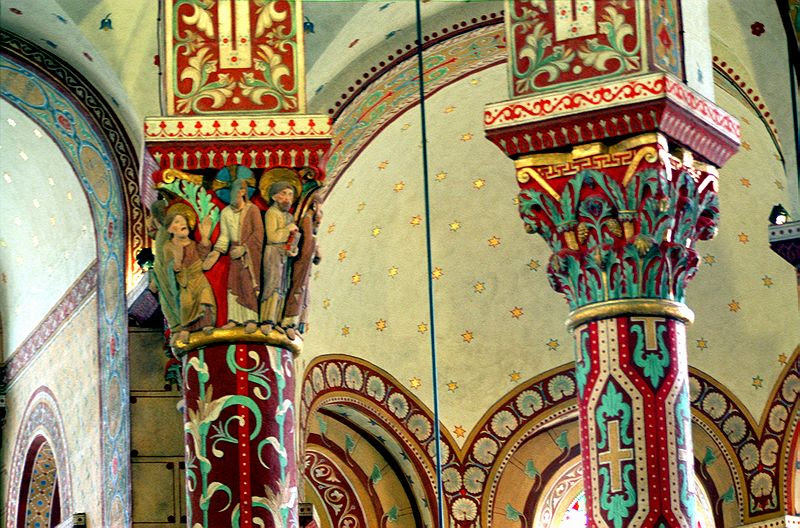 Capitals and a chevet chapel ceiling 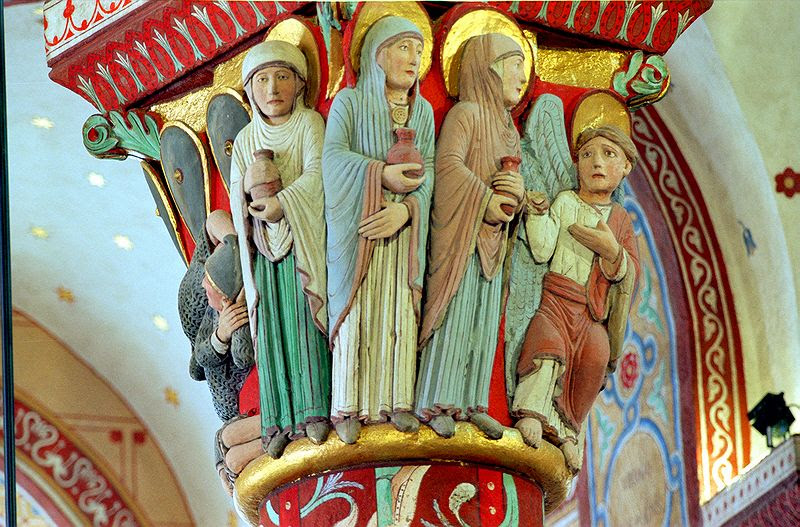 Capital depicting the Women at the Tomb

Issoire enables us to see something of the visual culture that surrounded the people of the twelfth century and against which their political dramas, intellectual achievements and spiritual insights were worked out and played out.

I think it would be wonderful if the great churches, and indeed the parish churches, that survive from this period still looked like this - as they were intended to be, and there for the greater glory of God.