Amongst the books I am currently reading is Augusta Theodosia Drane's The Life of Saint Dominic. This was originally published in London in 1857, and, having stood the test of time, was reprinted by TAN in 1988. It appears, particularly given its date and that it was written by a religious, a balanced and fair account, and drawing together what is known of the life of St Dominic (1170-1221). 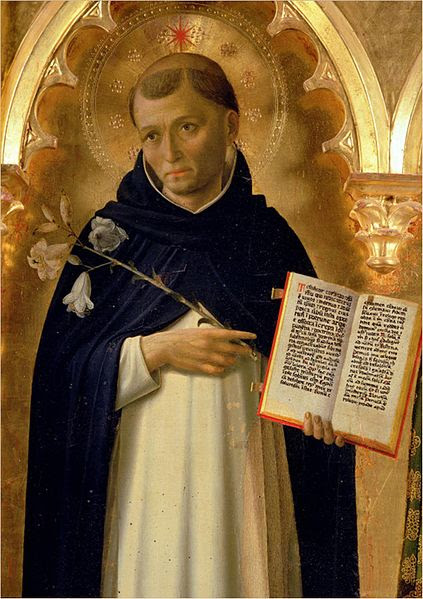 St Dominic
From The Perugia altarpiece of 1437 by Fra Angelico

One thing which particularly struck me was the similarity in the accounts of miracles attributed to St Dominic, especially those performed in Rome, to the accounts in Antonio Gallonio's Life of St Philip Neri.
In one way one should not be surprised that two saints should act in a similar way, and the Dominicans were a not inconsiderable influence on St Philip - not least the memory of Savanarola. The concept of an Oratory with preaching and penance at the heart of its ministry is very similar to the model proposed by St Dominic for his community.
Some of the incidents recorded are very similar - both are believed to have raised men from the dead at their intercession, and both are recorded as being seen to leviate whilst celebrating Mass. Like St Philip St Dominic appears to have had a rather matter of fact, almost disengaged, approach when dealing with situations that resulted in either a miracle or spiritual enlightenment and the bestowal of grace.
The historian in me wondered if Gallonio conciously modelled his hagiography of St Philip upon that which would have been available of the thirteenth century founder of the Dominicans, or if there is just a genuine coincidence between their two not dissimilar lives.