Although St Andrew is most frequently associated in the British consciousness with Scotland he was certainly honoured and invoked in medieval England.

Two ancient cathedrals, Rochester and Wells, are under his patronage, as is the one time cathedral and later priory church at Hexham, and he is also a co-patron with St Peter and St Paul of what is now Peterborough cathedral. There are parish churches dedicated to him in London and Norwich, and the remains of others in Worcester and York.

In York Minster there is this fine early fourteenth century depiction in glass of his death:

Outside towns he is a not an especially common patron, but I would draw attention to the fine former collegiate church of St Andrew at Greystoke in Cumberland. Being rather off the beaten track it is, I suspect, as well known as it deserves to be. I visited the church many years ago whilst on holiday in Carlisle with relatives whom I cajoled to take me there. There are illustrated articles about the church here, here and here. The misericords in the church are illustrated here. The VCH Cumberland account of the college can be read here.
The east window of the church has some fine fifteenth century glass recounting the life of At Andrew after the ebvents recorded in the New Testament. Thanks to the Rev.Gordon Plumb's post on today's Medieval Religion discussion group I can post a link to his fine set of images illustrating the glass and the story of Andrew, including his journey to Wronden to rescue Matthew. It can be viewed here. 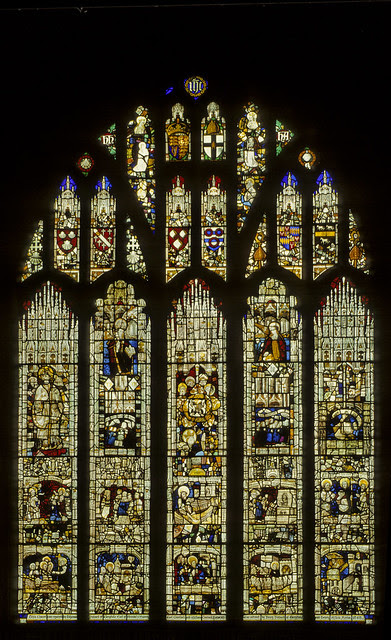 The east window of Greystoke Church.
The glass in the tracery is nineteenth century but that in the main lights fifteenth century York work

Image: Gordon Plumb on Flickr
Closer to my own home the church of St Andrew at Slaidburn, in Craven, was the first benefice held by Bishop Richard Fleming in 1403-4, being presented to it by Pontefract priory as patron. Only the tower survives from Fleming's time, the rest of the church being rebuilt later in the fifteenth century. There is a picture of the church as it is today here.
Just outside Pontefract is the church of St Andrew Ferry Fryston - often referred to as Ferrybridge church. This was moved from its original site in the marshes near the river Aire in 1952-3 to a new, drier, location. There is an illustrated article about it here.
Between Doncaster and Barnsley is the church of St Andrew at Bolton on Dearne. This is a church with very important Anglo-Saxon remains, and there is an illustrated article about it here. It is a church of which, on my church crawls, I became very fond - partly because of its traditional West Riding Anglo-Catholicism and also becuase it is little appreciated for its archaeological importance. A glance at later editions of Sir Nikolaus Pevsner's The West Riding reveals how he dismisses the church in a few lines in his first edition, and then had to add a lengthy piece in the appendix revisions explaining how its importance had been pointed out to him by H.M.Taylor - even experts can miss what actually stares one in the face.
Posted by Once I Was A Clever Boy at 10:36