Today is the feast of St Martin of Tours, the first non-martyr to have a recognised cult, and a very popular saint in the middle ages - as is indicated by the wide distribution of the images below.

a) as depicted (at far left) in the heavily restored later sixth-century mosaics (c. 560) in the nave of Ravenna's basilica di Sant' Apollinare Nuovo: 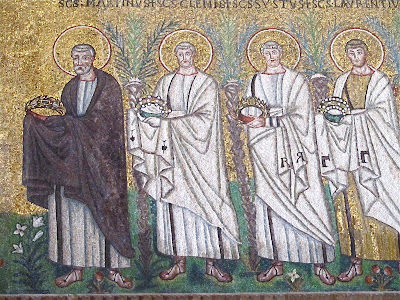 c) as depicted (at centre in lower register, between Sts. Lawrence of Rome and Leonard of Noblac) in a twelfth-century icon of Byzantine origin or inspiration in the Holy Monastery of the God-trodden Mount Sinai in St. Catherine (South Sinai governorate): f) as depicted (at far left) in the late twelfth-century mosaics (c. 1182) in the sanctuary of the basilica cattedrale di Santa Maria Nuova in Monreale: 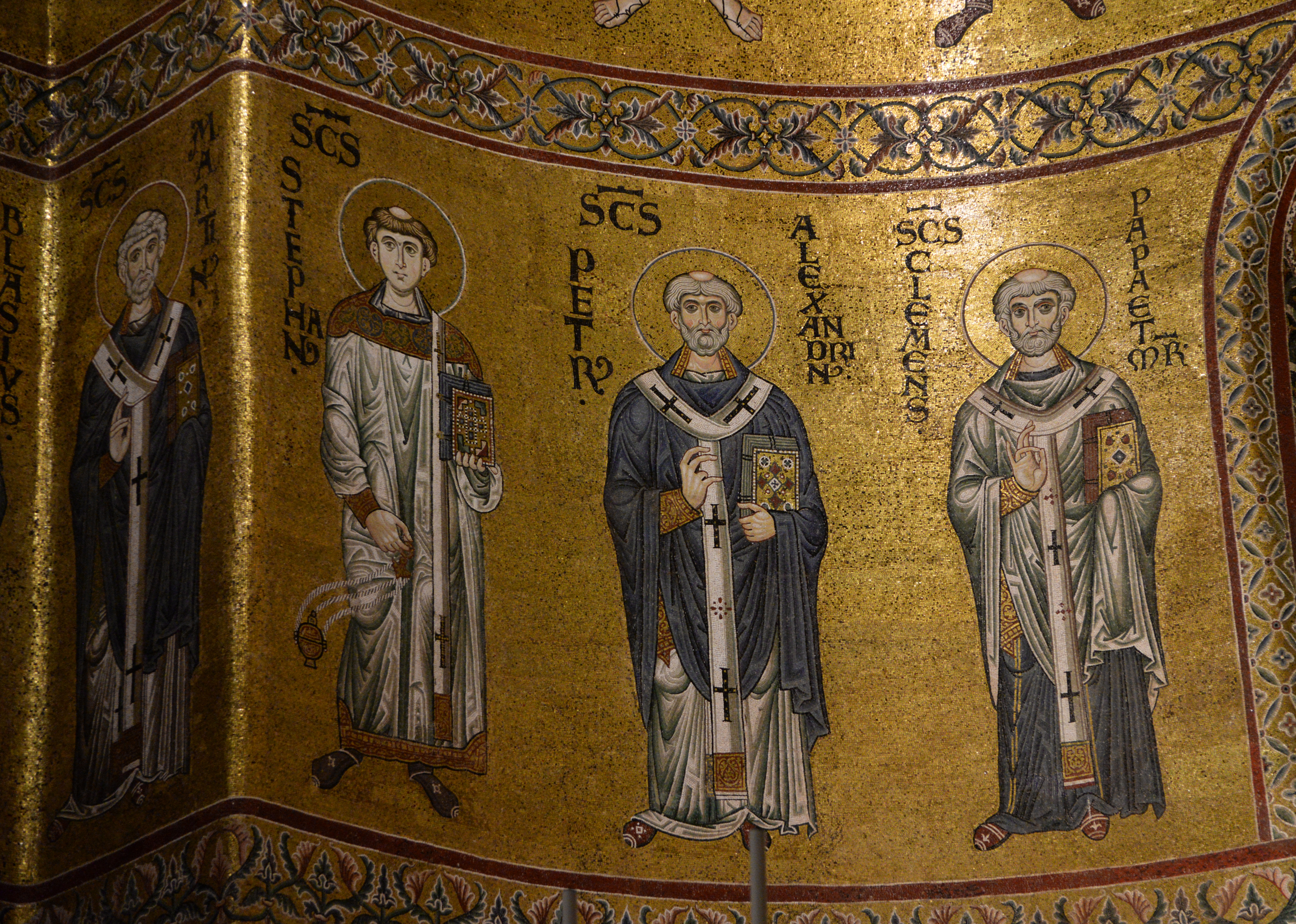 g) as portrayed in high relief in two locations on the right portal of the late twelfth or earlier thirteenth-century south porch of the basilique cathédrale Notre-Dame in Chartres:
1) On the right jambs (at left; at right, St. Jerome):
http://tinyurl.com/ostx422
Detail view:

i) as depicted in the early thirteenth-century Life of St. Martin window (bay 7; c. 1215) in the cathédrale Saint-Étienne in Bourges:
http://www.medievalart.org.uk/bourges/07_pages/Bourges_Bay_07_key.htm
Detail view (cutting his cloak):
http://www.medievalart.org.uk/bourges/07_pages/Bourges_Bay_07_panel_01.htm l) as depicted in the earlier thirteenth-century Life of St. Martin window (bay 102b; c. 1240) in the cathédrale Saint-Maurice in Angers:
http://www.medievalart.org.uk/Angers/Bay_102b/Angers_Bay102b_Key.htm 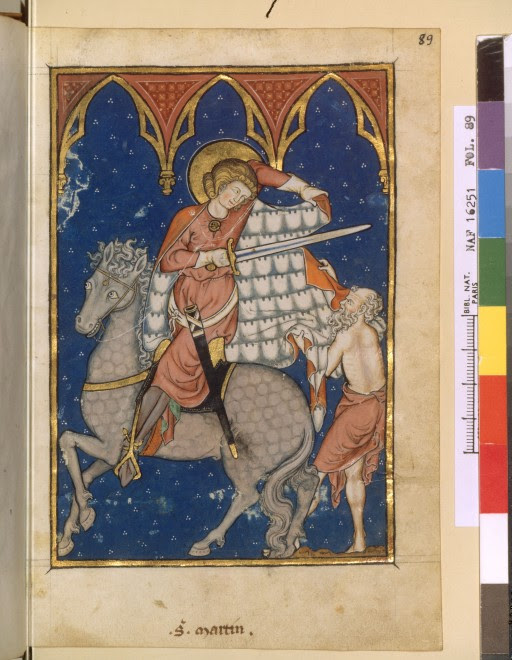 p) as depicted (cutting his cloak) in an early fourteenth-century fresco in the cathédrale Saint-Gatien in Tours:
https://www.flickr.com/photos/biron-philippe/7585653434/

q) as depicted (scenes from his Vita) by Simone Martini in a series of early fourteenth-century frescoes (between 1312 and c. 1318) in the cappella di San Martino in the lower church of the basilica di San Francesco in Assisi: r) as depicted (at top right in the major panels) by Giovanni di Bonino, perhaps working from a design by Simone Martini, in one of the three earlier fourteenth-century windows (after 1312) in the cappella di San Martino in the lower church of the basilica di San Francesco in Assisi:
http://www.wga.hu/art/s/simone/3assisi/scenes/99window.jpg
Detail view:

s) as portrayed in an earlier fourteenth-century elephant ivory statuette of German origin (c. 1320; Köln or Mainz) in the Victoria and Albert Museum, London:
http://tinyurl.com/nsnqkgh 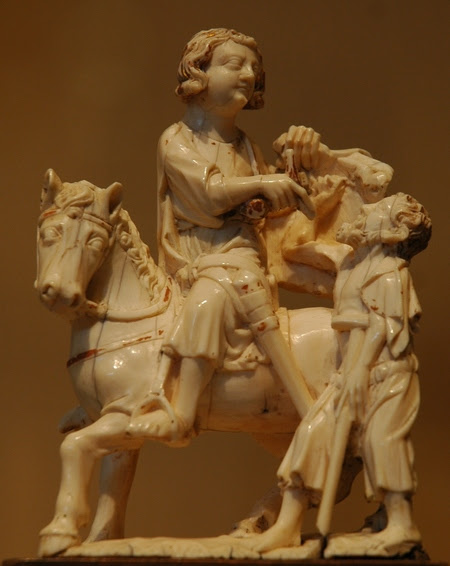 u) as depicted (at left; at right, St. Theodore the Stoudite) in the earlier fourteenth-century frescoes (between 1335 and 1350) in the narthex of the church of the Holy Ascension at the Visoki Dečani monastery near Peć in, depending on one's view of the matter, either the Republic of Kosovo or Serbia's province of Kosovo and Metohija:

v) as portrayed in high relief (consecration as bishop; cutting his cloak) on a mid-fourteenth-century polychromed ivory diptych (c. 1340-1350) of northern French or Flemish origin in the Cleveland Museum of Art: 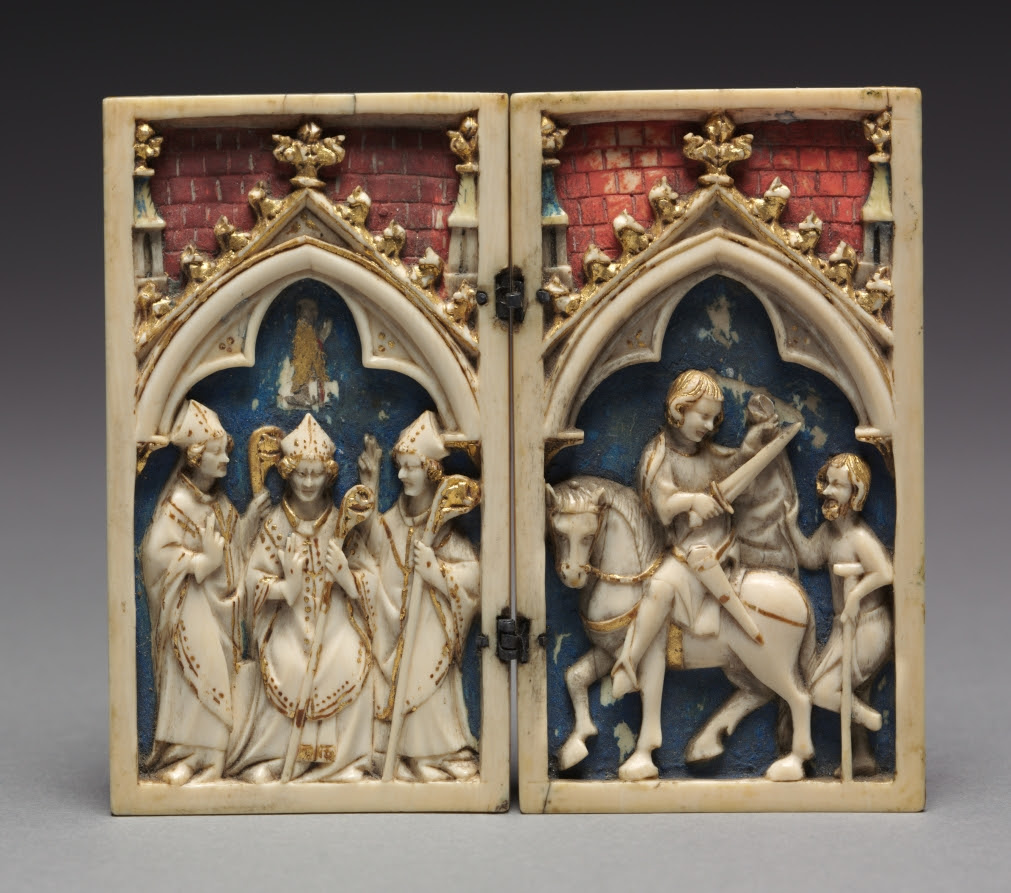 x) as depicted (cutting his cloak) in a mid-fourteenth-century copy, from the workshop of Richard and Jeanne de Montbaston, of the Legenda aurea in its French-language version by Jean de Vignay (1348; Paris, BnF, ms. Français 241, fol. 300r):
http://tinyurl.com/pua5rvp

y) as depicted (cutting his cloak) in a mid-fourteenth-century vault painting (c. 1350) in Skibby Kirke at Skibby, Lejre Kommune, Sjælland:

z) as portrayed in a late fourteenth-century reliquary bust (from Avignon?; restored in the twentieth century) in the Musée du Louvre in Paris:


aa) as depicted (at top in the right margin; demanding a steep price of Clovis for the return of a horse) in the numerous pen-and-ink illustrations in the margins of an early fifteenth-century copy of the Chronicon a mundi creatione ad annum 1220, an abbreviation and continuation of the Pantheon of Godfrey of Viterbo (c. 1400-1415; Paris, BnF, ms. Latin 4935, fol. 8v):
http://gallica.bnf.fr/ark:/12148/btv1b8455934w/f26.image

bb) as depicted (at left; at right, brigands) in an earlier fifteenth-century embroidery of southern Netherlandic origin (c. 1430) in The Cloisters Collection of the Metropolitan Museum of Art, New York: 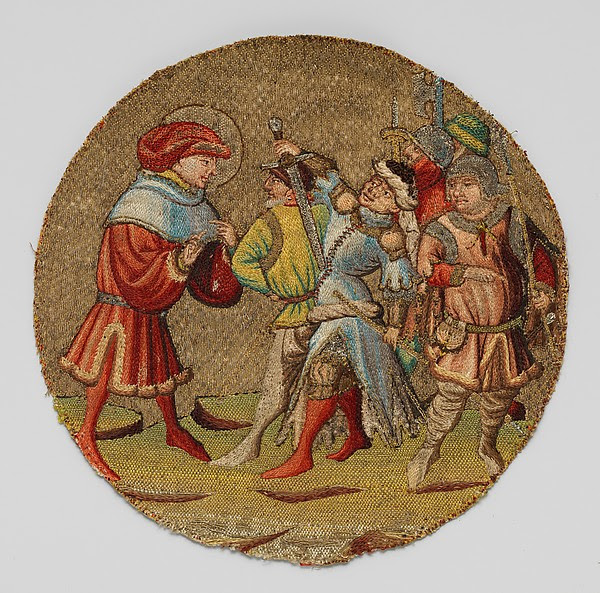 dd) as depicted (upper right; cutting his cloak) by Girolamo di Giovanni of Camerino in a later fifteenth-century triptych (c. 1473) in the chiesa di San Martino Vescovo in Monte San Martino (MC) in the Marche:
http://tinyurl.com/q74m33o gg) as portrayed (with the beggar) in a later fifteenth-century statue (c. 1475-1480) of German origin in the Seattle Art Museum, Seattle (WA): hh) as depicted in two late fifteenth-century panel paintings (c. 1490) on either side of a wing from a dismembered altarpiece in the Magyar Nemzeti Galéria, Budapest:
1) Cutting his cloak: ii) as depicted (center panel; cutting his cloak) by Bartolomeo Vivarini in his late fifteenth-century Triptych of St. Martin (1491) in the Accademia Carrara, Bergamo:

jj) as portrayed (cutting his cloak) in high relief in a late fifteenth- or early sixteenth-century sculpture (c. 1500), from Bjæverskov Kirke in Sjælland, in the Nationalmuseet, Copenhagen:

kk) as depicted (cutting his cloak) in an embroidered early sixteenth-century cope shield (between 1500 and 1509) in the Museum Catharijneconvent in Utrecht: 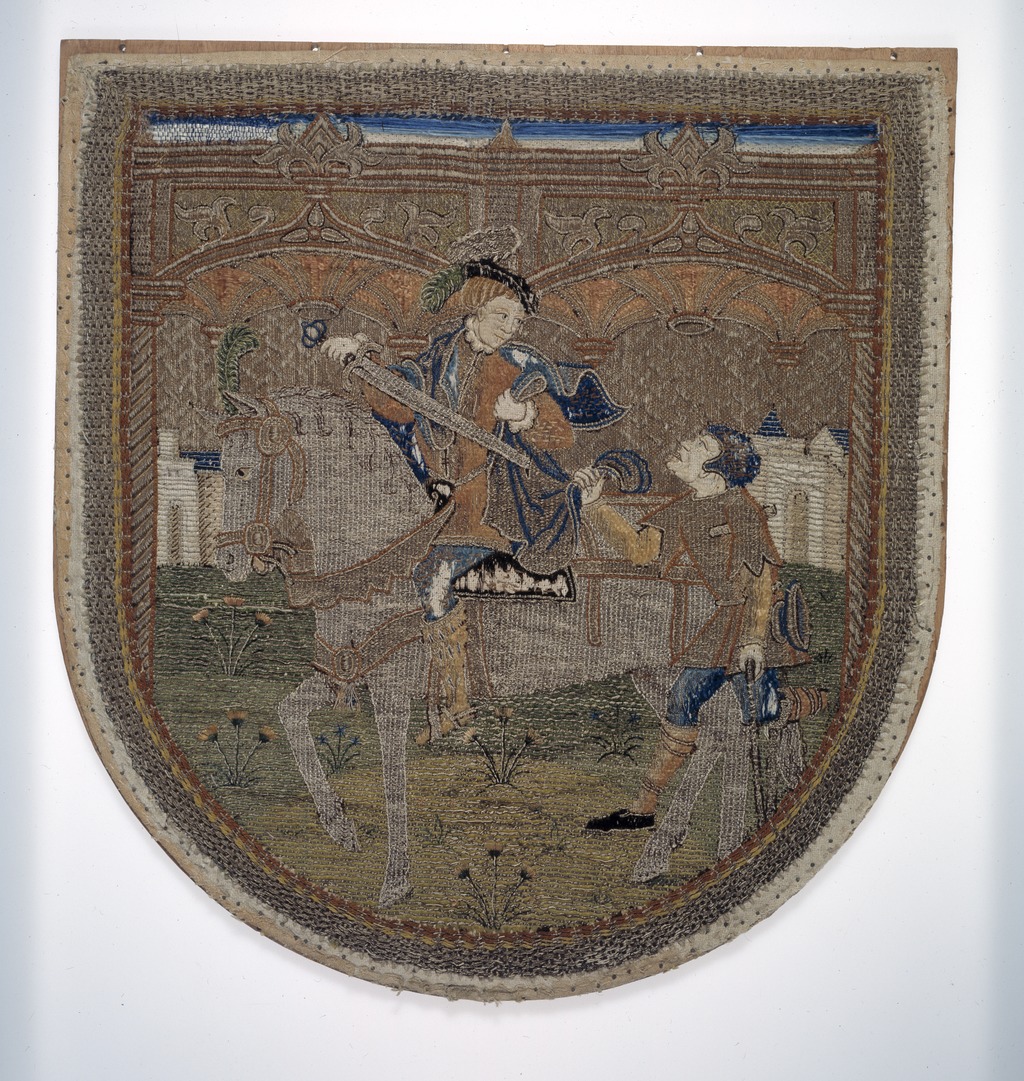