Today is the Feast of All Saints, and John Dillon has posted some images of them on the Medieval Religion discussion group:

Today, being both November 1st and the Sunday in the octave around November 1st, is in Latin-rite churches and in others influenced by their festal calendars, the feast of All Saints (in Eastern-rite churches, where the observance arose, their celebration falls rather on the first Sunday after Pentecost). Herewith some period-pertinent images associated directly with this veneration in that they either accompany texts for or describing the feast in question or else are parts of altars devoted principally to the cult of All Saints (as opposed, say, to images of the Coronation of the BVM drawing upon the traditional imagery of All Saints). Also included (item k) is one well known image of the saints in their multitude arrayed about the Godhead where a direct connection to the liturgical celebration is not immediately evident.

b) as depicted in the earlier eleventh-century Sacramentary of Robert of Jumièges (c. 1020; Rouen, Bibliothèque Jacques Villon, ms. 274, fol. 158v): e) as depicted in a perhaps mid-thirteenth-century pontifical and collects concordant with the Use of the abbaye de St.-Pierre at Corbie (Amiens, Bibliothèque Louis Aragon, ms. 195, fol. 132r):
http://www.culture.gouv.fr/Wave/savimage/enlumine/irht3/IRHT_061417-p.jpg
Textual context:
http://www.culture.gouv.fr/Wave/savimage/enlumine/irht3/IRHT_061416-p.jpg

k) as depicted by Giusto de' Menabuoi in his later fourteenth-century frescoes (later 1370s) in the central cupola of the battistero di San Giovanni in Padua: 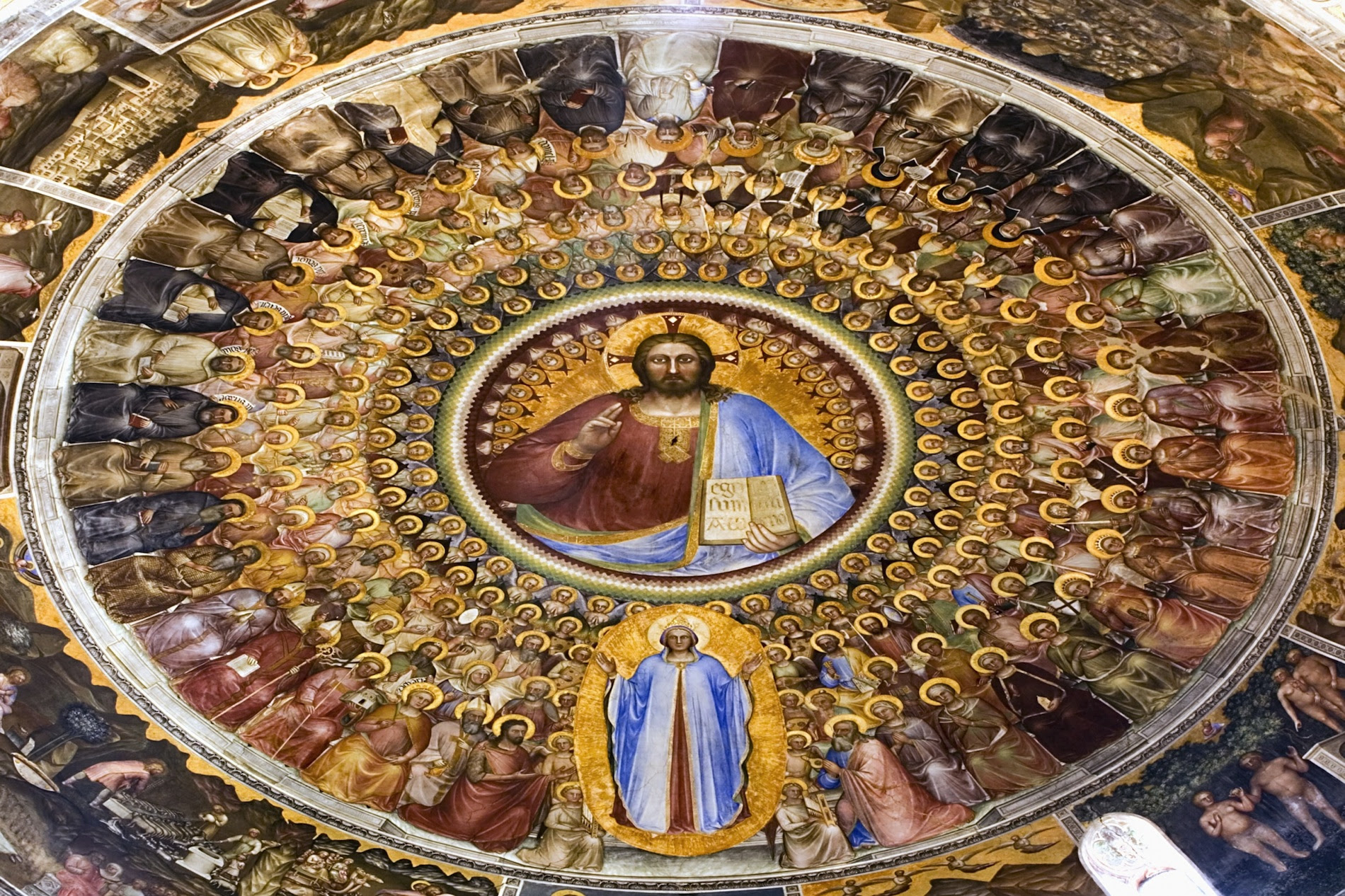 l) as depicted in a late fourteenth-century missal from Autun concordant with the Use of Beaune (1394; Dijon, Bibliothèque municipale, ms. 110, fol. 387r):
http://www.enluminures.culture.fr/Wave/savimage/enlumine/irht6/IRHT_093978-p.jpg

m) as depicted in a late fourteenth- or early fifteenth-century altarpiece of Spanish origin in the Metropolitan Museum of Art, New York: 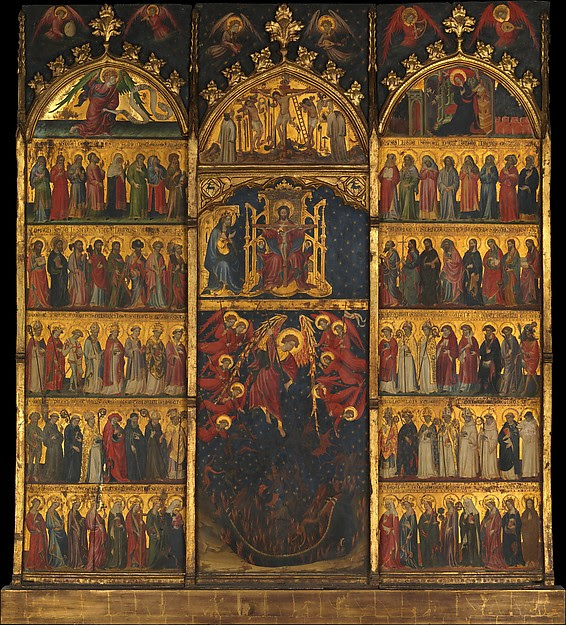 n) as depicted in an early fifteenth-century missal concordant with the Use of Tours (Tours, Bibliothèque municipale, ms. 185, fol. 251r):
http://www.enluminures.culture.fr/Wave/savimage/enlumine/irht9/IRHT_150324-p.jpg 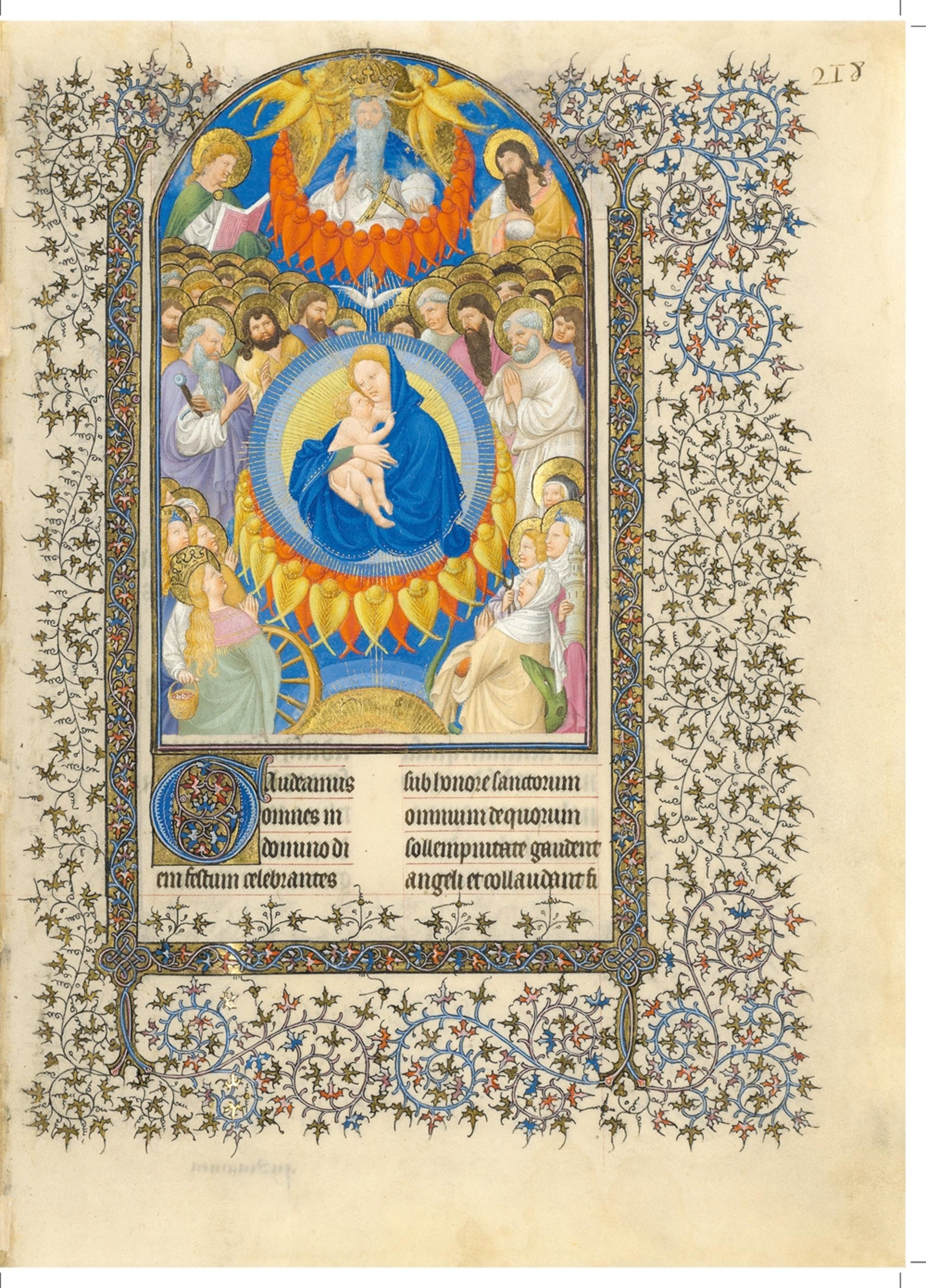 q) as depicted by the Boucicaut Master in an earlier fifteenth-century book of hours made in Paris (c. 1415-1420; Los Angeles, The J. Paul Getty Museum, ms. 22):
http://tinyurl.com/p4jnyxy

r) as depicted by Beato Angelico (probably) in two corresponding panels, flanking the central one of Christ in glory with angels, on the predella of his earlier fifteenth-century San Domenico Altarpiece (1423-1424) in the National Gallery of Art, London:
1) http://tinyurl.com/q4tbmb2
2) http://tinyurl.com/p9ac548
The predella in its entirety:
http://www.wga.hu/art/a/angelico/00/11fieso1.jpg

u) as depicted in a mid-fifteenth-century missal concordant with the Use of Nantes (Le Mans, Médiathèque Louis Aragon, ms. 223, fol. 201r):
http://www.enluminures.culture.fr/Wave/savimage/enlumine/irht5/IRHT_082520-p.jpg

w) as depicted by Jean Fouquet at the conclusion of the Suffrages in the now dismembered mid-fifteenth-century Hours of Étienne Chevalier (1450s; this folio in the Musée Condé, Chantilly [Oise], ms. 71, fol. 113r):

x) as depicted at the conclusion of the Suffrages in a later fifteenth-century book of hours made in Bruges (c. 1460; Baltimore, The Walters Art Museum, Walters ms. W.186, fol. 293r):
http://tinyurl.com/okqny92

dd) as depicted by Albrecht Dürer in his early sixteenth-century All Saints altarpiece (1511; a.k.a. the Landauer Altar) in the Kunsthistorisches Museum in Vienna:

http://tinyurl.com/p2fddx5
The painting at higher resolution:

ee) as portrayed in high relief on the early sixteenth-century altar (1518) in the Allerheiligenkapelle of the Pfarrkirche St. Benedikt in Altmünster (Land Oberösterreich):