Archbishop Robert Holgate and his Hospital


Last Sunday, November 15th, was the 560th anniversary of the death in London of Robert Holgate (1481/2–1555), last Master of the Order of Sempringham, Bishop of Llandaff, President of the Council of the North from 1538 and Archbishop of York from 1545 until deprived by Queen Mary in 1553 on account of his marriage. He was buried in St Sepulchre's Holborn.


There is a brief online life of him at Robert Holgate and H.L.Parish's much fuller Oxford DNB life can be read at Holgate, Robert

Image:ahgs.co.uk
My interest in Holgate arises from the fact that he came from my part of the West Riding. Holgate was born in Hemsworth in 1481/2, and contracted his rather odd marriage to Barbara Wentworth in 1550 at the church at Adwick-le-Street in the same area - and where incidentally the parish priest Robert Parkyn jotted down his reactions to the religious changes going on around him in a way analogous to the much fuller reconstruction we have of life in Morebath thanks to Professor Duffy; Professor A.G. Dickens edited these and used them in his books. There is more about this Catholic priest at http://www.adwick-st-laurence.co.uk/history_parkyn.html

St Laurence Adwick-le-Street, where Holgate became the first married Archbishop of York - and potentially a bigamist
Image:britishlistedbuildings.co.uk
Prof. Dickens wrote several pieces about Holgate whom he claimed to see as an early example of a distinctive Anglican spirituality and tradition.

As Archbishop of York he must have been the only man to wear teh Anglican Pallium provided for by legislation after the break with Rome whereby the Archbishops of Canterbury and York were to consecrate pallia for each other. Holgate was the one Archbishop in this era who qualified for such an ornament. the provision would have been repealed under Queen mary, and was never re-enacted under her falf-sister or her successors. In any case, of course, the pallium is seen as asymbol of union with the Holy See. There is an article in a volume of the Yorkshire Archaeological Journal from the 1890s which discusses this Henrician provision

He founded three Grammar schools in 1546-7 at his birthplace Hemsworth - whence the school was transferred to Barnsley in the late nineteenth century; its former buildings in Hemsworth are now, perhaps ironically, the Catholic church of the Sacred Heart - at Malton where he had been Prior of the Gilbertines and in York There is more on these and other educational interests in an extract from Prof Dickens' Borthwick paper account of the Archbishop which can be seen at http://www.ahgs.co.uk/history.html

In his will of 1555 he provided that almshouses should be built to provide for persons aged 60 years or over from the ancient parishes of Hemsworth, Felkirk, South Kirkby, and Wragby. originally close
to the church in Hemsworth they were moved to a new site and buildings on the edge of Hemsworth in 1860, and adjoins Vissett manor, which is sais to be the Archbishop's birthplace. Today Archbishop Holgate's Hospital provides 24 self-contained homes for its almspeople. 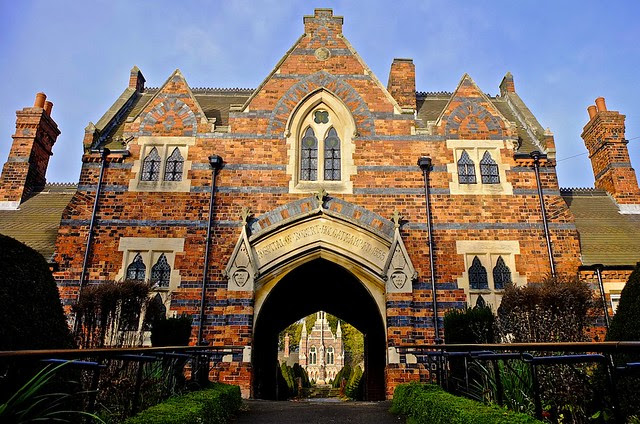 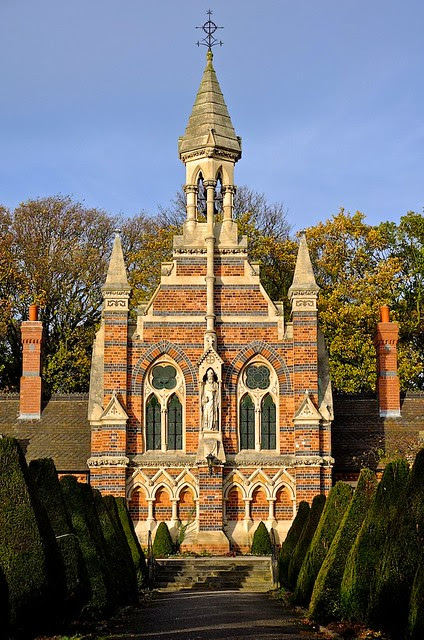 The Chapel
Images:urbexforums.com
More pictures of the Hospital and its grounds can be seen at the online account at Archbishop Holgate Hospital, Hemsworth.

Last Monday the present Archbishop of York preached at the founder's day Evensong and opened a new facility named the Ebor Hall for the use of the Hospital residents and the parish of Hemsworth, as can be seen in Archbishop Opens Ebor Hall at Archbishop Holgate's Hospital. The present Master of the Hospital is an old friend of mine, whom I got to know on Anglican Pilgrimages to Walsingham when I still lived in Pontefract.

Liked the blog :) Robert is my 16th Great Grand Uncle :) I'm descended from his sister Elizabeth and her husband, John Nettleton.