The Ecumenical Patriarch at the Oxford Union


Last night I attended a speech and question and answer session with the Ecumenical Patriarch at the Oxford Union.

Patrirach Bartholomew I, who, to give him his full title is His All Holiness the Ecumenical Patriarch and Archbishop of Constantinople - New Rome, and that is a tittle to conjure with if you have any sense of history or ecclesiology, has held office since November 1991, and is the 270th occupant of that throne. There is an online account of him at Bartholomew I of Constantinople

The Patriarch vested and enthroned

The meeting in the Debating Chamber was well attended, and in addition to the Patriarchal suite the
Archbishop of Birmingham (himself aormer Union Treasurer) and an Anglican bishop were present.

His All Holiness spoke about the Environment, an issue he has made very much a theme of his Patriarchate.

He stressed that Religion had something to say about the issues and that this was a matter of solidarity. The Economy should serve mankind, and pointed out that the words economy, ecology, and ecumenism have the same Greek root. He rejected the subordination of individual to economics.
He raised the question as to whether we should sacrifice western aspirations in regard to combatting global-warming - this would potentially safeguard the most vulnerable who are at risk in the future.

We  still act against our knowledge of the situtation. However the future is open, the choice is ours.
Future generations are entitled to live in a peaceful world that environmentally safe, and unlike past generations we cannot claim not to know.

The forthcoming Paris Conference is an opportunity to be grasped and to make progress.

Why the issue matters to religion is that it involves us in our mutual obligation one to another. He holds to a vision of participation, of life as communion, and that Christians must voice their opinion on this vital issue.

Following his speech questions were answered on behalf of the patriarch - as is customary - by his  spokesman, who is his theological advisor.From this we learned that on the environment the Patriarch's views are same as those set out by the Pope in Laudato Si, and that there was no separation on such matters. 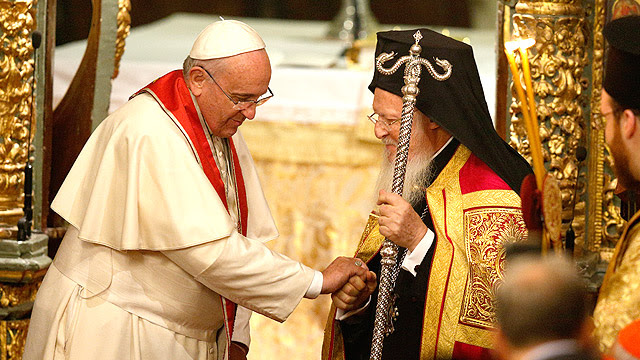 In 1989 a Day of Prayer for the Environment was established by his predecessor Patriarch Demetrios I, a precedent followed this year by Pope Francis who established it this this year for September 1st and by the Archbishop of Canterbury also

Orthodox Christians are now a tiny minority community, interfaith dialogue is what they have to do - and Interfaith interdisciplinary symposia occurred in the period 1995-2009.

In the wake of the recent Turkish election  it is necessary to work with the current situation, bearing in mind past expulsions and the closing of the seminary in 1971, where the Patriarch himself trained, and which he is working to get reopened.

Since 1991 his personality has helped to open up dialogue with Turkish establishment, and the advisor expressed the hope that President Erdogan lives up to his pledges to Greeks and Jews in the country.

Asked about relations with and between the Russian Orthodox and Vladimir Putin the point was made that Orthodoxy consists of 14 autocephalous churches. A lot unites them theologically and liturgically, but administrative structures differ. The function of the Ecumenical Patriarch is to guard that unity

The forthcoming Council of the Orthodox Church has been a hundred years in planning, with thirty years active work. This is scheduled for next year  and is something not seen for 1200 years. Since 2009 the churches have planned for this.

On how to speak to the secular world about the environment the emphasis should be on justice, on what we have in common.

Asked about the reaction to militant Islam the answer was that the religious response of caring for neighbours was what the Church was going to do, and concluded with the suggestion that Greek islanders caring for Muslim refugees may assist Muslim-Christian dialogue for the future.

This was a most interesting occasion, full of history hanging in the air for someone with my interests, and Patriarch Bartholomew speaks with an authority that is both personal and veted in his office.