Today would, had it not been a Sunday, have been the feast of St Albert the Great, and John Dillon has posted about him on the Medieval Religion discussion group as follows

The Swabian Albert of Lauingen (later Albert the Great; in Latin, Albertus Magnus) had been studying at Padua when in 1223 Bl. Jordan of Saxony accepted him into the Dominican Order. He completed his novitiate at Köln and then served as a lector in various houses in his order's German-speaking province. From 1243 to 1248 Albert studied and then taught at Paris. He returned to Köln in 1248 as head of his order's university there. In 1254 Albert was elected provincial of the aforementioned province. For the remainder of his life, though there were times when he was able to teach, he acted primarily as an ecclesiastical administrator. Consecrated bishop of Regensburg in 1260 at the behest of pope Alexander IV, he served unwillingly and returned to his order in 1262. As a papal legate in 1263 and 1264 he preached the Crusade in Germany and Bohemia. In 1274 he participated in the Second Council of Lyon.

Albert was a prolific author from early in his career until about ten years before his death in Köln in the year 1280. Like his student Thomas Aquinas, he wrote commentaries on the Bible in addition to a corpus of influential philosophical works that helped to define the medieval Christian reception of Aristotle. Albert was beatified in 1622 and canonized in 1931. His entry in the Stanford Encyclopedia of Philosophy begins here:http://plato.stanford.edu/entries/albert-great/ 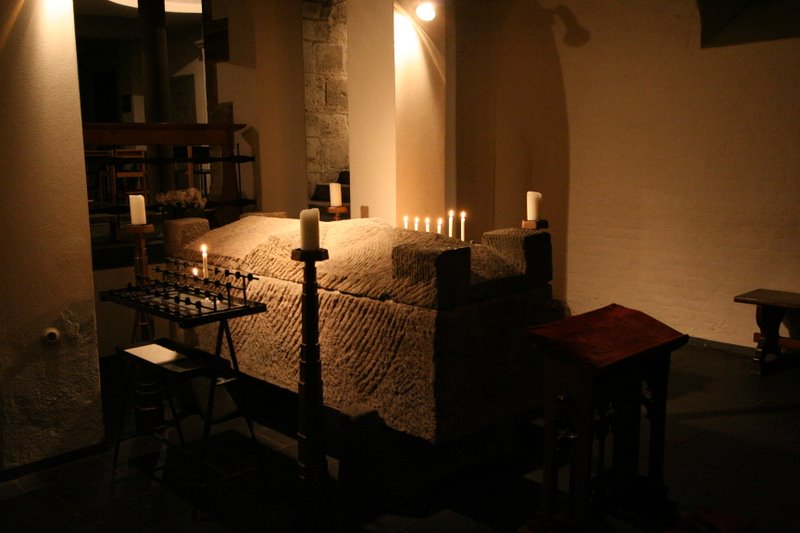 
Some period-pertinent images of Albertus Magnus:

a) as depicted in the opening initial of a late thirteenth-century copy of his De mineralibus (Paris, BnF, ms. Latin 6514, fol. 1r):
http://tinyurl.com/yhpxef4

c) as depicted by Tommaso da Modena in his mid-fourteenth-century portraits of Dominican worthies (1351/52) in the chapter room of the former Dominican convent (now a diocesan seminary) adjacent to the chiesa di San Nicolò at Treviso:

d) as depicted by Hugo of Schleusingen in the Bartholomaeus Anglicus portion of a late fourteenth-century miscellany from Schmalkalden (1388; München, BSB, Clm 27029, fol. 88r):

e) as depicted by Beato Angelico in the roundels of Dominican worthies beneath his earlier fifteenth-century fresco (early 1440s) of the Crucifixion and Saints in the chapter room of the convento (now Museo nazionale) di San Marco in Florence:

g) as depicted by someone in the circle of Friedrich Walther in a mid- or later fifteenth-century panel painting in the Metropolitan Museum of Art, New York: 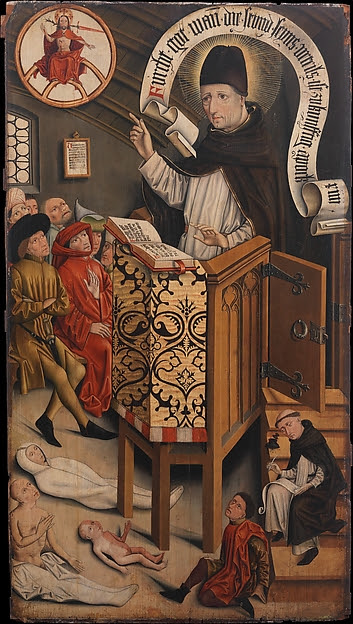 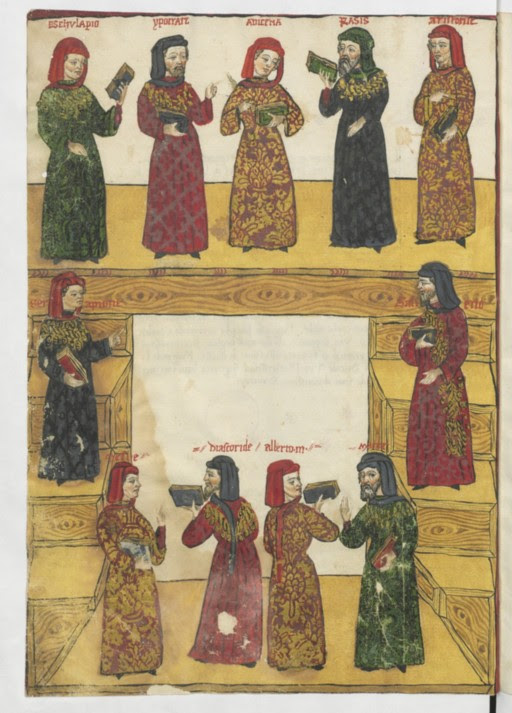 i) as depicted in a later fifteenth-century panel painting (c. 1476) variously attributed to Joos van Gent (Justus of Ghent, etc., etc.) or to Pedro Berruguete in the Galleria nazionale delle Marche in the ducal palace at Urbino:

l) as portrayed by Vincenzo Onofri in a late fifteenth-century bust (c. 1493) in the Museo civico medievale in Bologna: 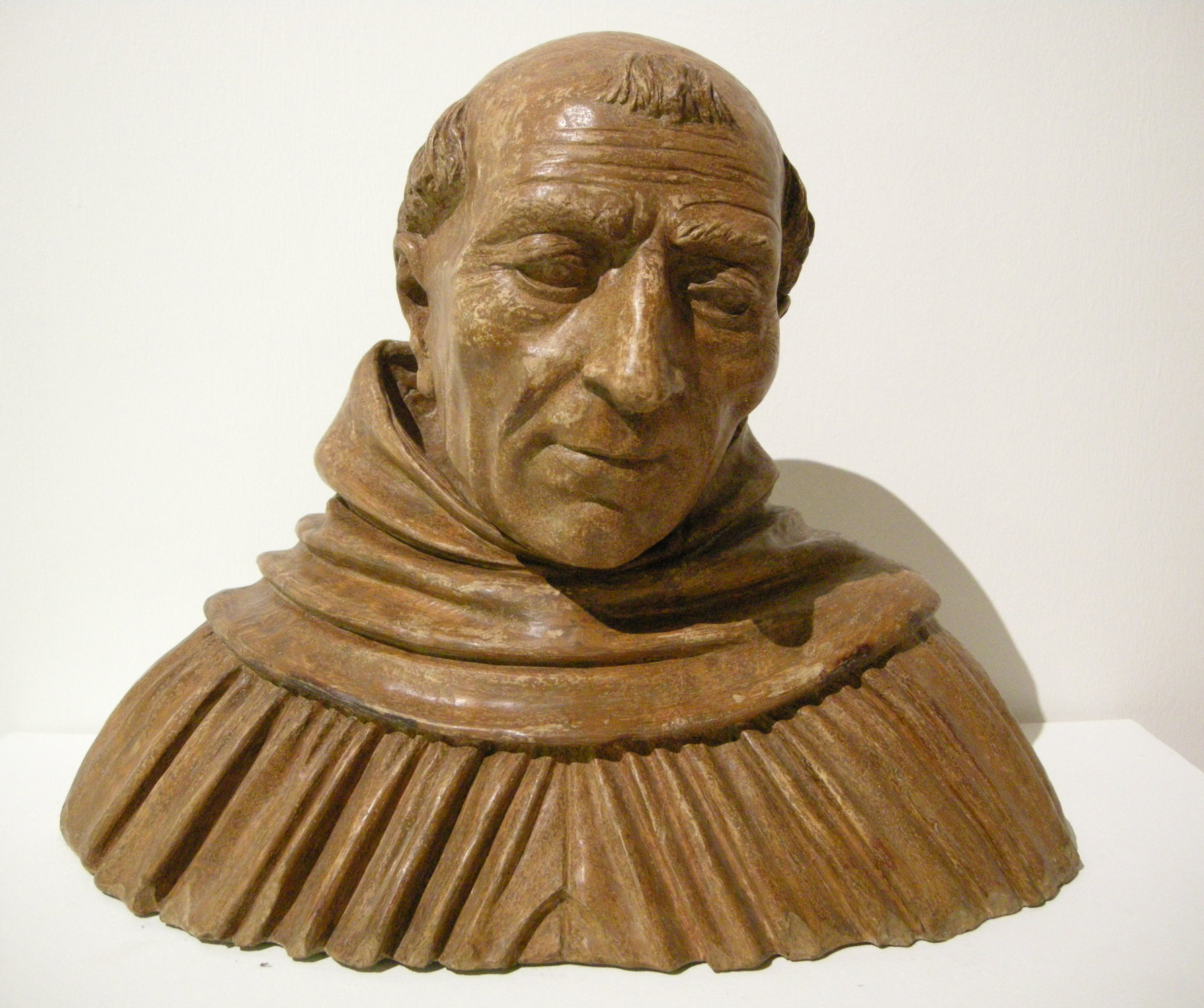 n) as depicted (at left; at right, Bl. John Duns Scotus) by Amico Aspertini in an earlier sixteenth-century panel painting (1521) in the Pinacoteca civica in Como: