John Dillon posted about St Elizabeth of Hungary, whose feast falls today in the General calendar, on the Medieval Religion discussion group as follows:

A daughter of King Andrew II of Hungary, Elizabeth was married in 1221 to Ludwig IV, landgrave of Thüringen (whence she is also known as Elizabeth of Thüringen). They had three children of whom the third, a daughter, was born after her crusading father's death at Otranto in 1227 and died in infancy. Only twenty when she was widowed, Elizabeth left the Thuringian court soon afterward -- there was a nasty struggle over her dowry -- and took up residence in Marburg (in today's Hessen), where she lived ascetically, devoted herself to works of charity, and died in 1231 at the age of twenty-four. Miracles were reported at her tomb and a cult arose. Two canonization trials ensued, followed by a canonization in 1235. Having dedicated to St. Francis of Assisi a hospital she had built in Marburg, she was subsequently promoted by Franciscans as a model of lay spirituality and charity. But she was educated at a Dominican convent in Hungary and the Dominicans claim her as well.

Elizabeth has a very extensive hagiographic dossier, including rather different miracle collections emanating from the Order of Friars Minor and from the Order of Preachers. In one legend, the young Elizabeth was forbidden by her father to distribute food to the poor. She of course did so anyway and was stopped for inspection, whereupon the food was changed miraculously to flowers (or was miraculously covered by them).

Some period-pertinent images of St. Elizabeth of Hungary / of Thüringen:

a) as portrayed at the base of her tomb (c. 1235-1250) in the originally thirteenth- and earlier fourteenth-century St. Elisabethkirche in Marburg an der Lahn, begun in the year of her canonization: 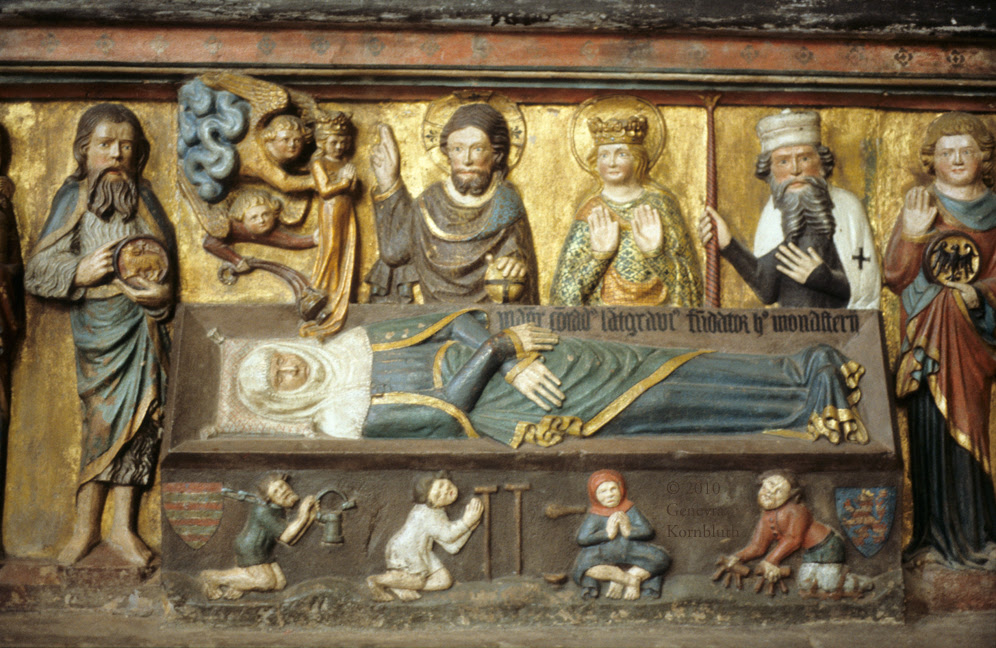 http://www.kornbluthphoto.com/images/ElizShrine2.jpg [photo courtesy of Genevra Kornbluth]
The tomb as a whole:

2) Scenes of Elizabeth as portrayed on the roof of the shrine: c) Elizabeth as portrayed in an earlier thirteenth-century statue, thought to be from very shortly after her canonization in 1235, in the Kirche (ex-cathedral) St. Peter und Paul in Naumburg:
http://tinyurl.com/2c92wjh

d) as depicted (scenes) in several panels of the earlier thirteenth-century glass window (before 1250) devoted to her in the choir of the St. Elisabethkirche in Marburg an der Lahn:
1) http://tinyurl.com/pn23wco
larger view: 3) http://tinyurl.com/okvgktd
The window as a whole (click on the panels for smallish individual views):
http://alt.elisabethkirche.de/rundgang/ixu_fur_l6.htm

g) as depicted (at left; with Sts. Margaret of Hungary and Henry of Hungary) by Simone Martini in his early fourteenth-century frescoes of Franciscan saints (c. 1318) in the south transept of the lower church of the basilica di San Francesco at Assisi:

h) as depicted (at right; at left, St. Clare of Assisi) by Simone Martini in an earlier fourteenth-century fresco (c. 1318-1320) at the entrance to the cappella di San Martino in the lower church of the basilica di San Francesco at Assisi: 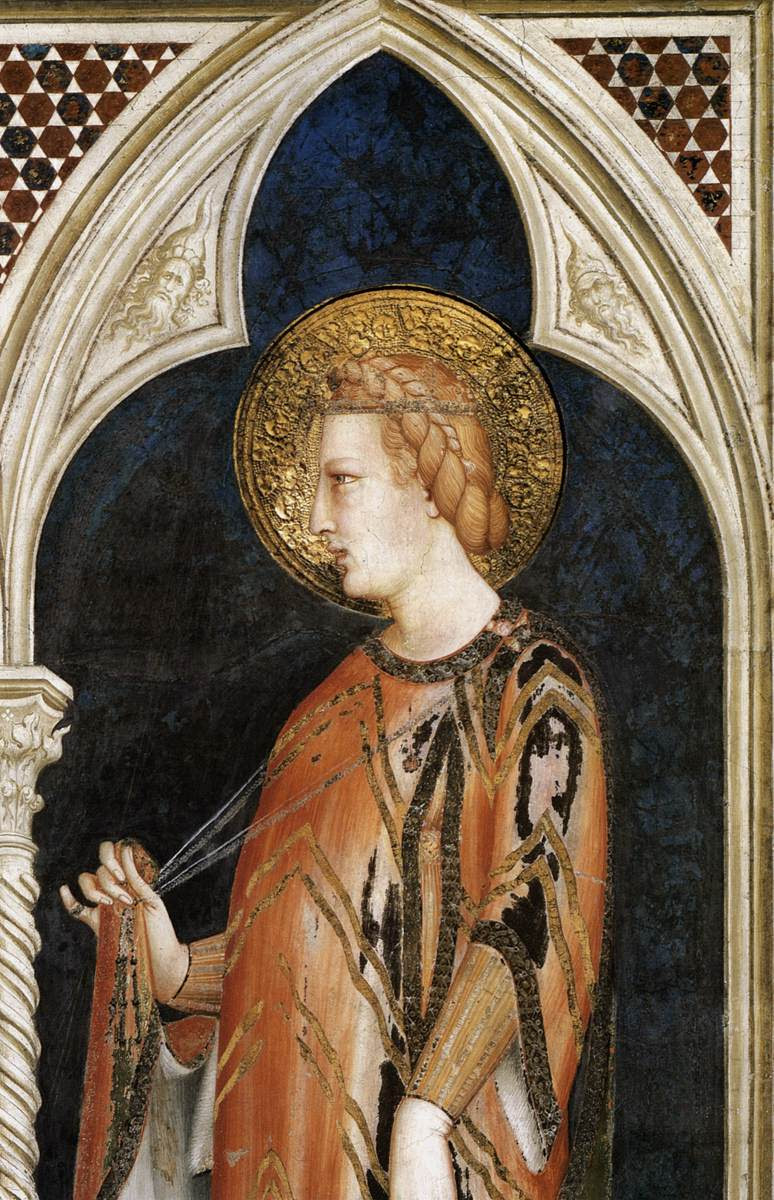 i) as depicted (giving a cloak to a beggar) in a panel of the earlier fourteenth-century Altenberg Altarpiece (c. 1330) in the Städelsches Kunstinstitut, Frankfurt m Main:
https://www.flickr.com/photos/hen-magonza/5888827150/

j) as depicted (at right; miracle of the flowers) in an earlier fourteenth-century fresco (c. 1337) formerly in the chiesa di Sant'Elisabetta d'Ungheria in Perugia and now in the Galleria Nazionale dell'Umbria in that city: l) as depicted (experiencing a vision) as depicted in an earlier fourteenth-century copy, from the workshop of Richard and Jeanne de Montbaston, of the Legenda aurea in its French-language version by Jean de Vignay (1348; Paris, BnF, ms. Français 241, fol. 305r): 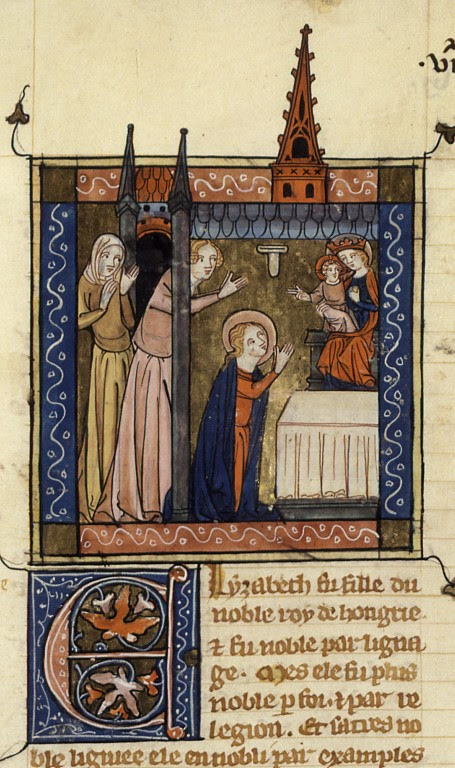 m) as depicted on the upper portion of a wing of a later fourteenth-century altarpiece (c. 1370-1373) from Schloss Tirol in the Tiroler Landesmuseum Ferdinandeum, Innsbruck:

http://tarvos.imareal.oeaw.ac.at/server/images/7003466.JPG
The altarpiece as a whole: n) as depicted (holding flowers) in a late fourteenth- or very early fifteenth-century panel painting attributed to Gherardo Starnina (formerly known as the Maestro del Bambino Vispo) sold at auction at Sotheby's in 1962:

r) as depicted (scenes) on the earlier fifteenth-century choir screen (c. 1420-1430) of the Heiligen-Geist-Hospital in Lübeck:

http://www.heilige-elisabeth-damp.de/exponat.php?artikelnr=540
The panels in situ:

s) as depicted (at right, holding flowers; at left, St. Francis of Assisi) by Piero della Francesca in his later fifteenth-century Polyptych of Sant'Antonio (c. 1460-1470) in the Galleria Nazionale dell'Umbria in Perugia: t) as portrayed in a later fifteenth-century polychromed wooden statue (c. 1470; the crown is later) in the nave (near the choir screen) in the St. Elisabethkirche in Marburg an der Lahn: 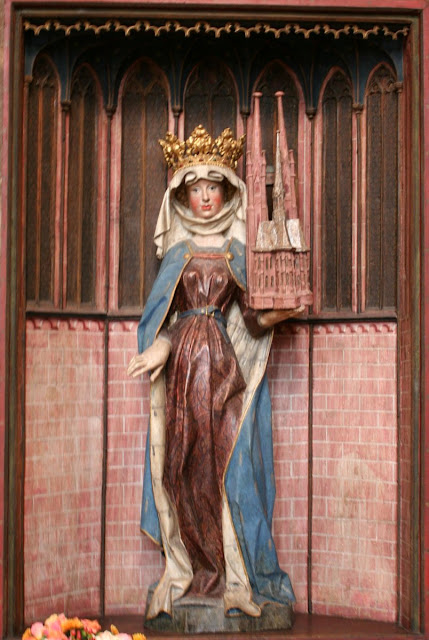 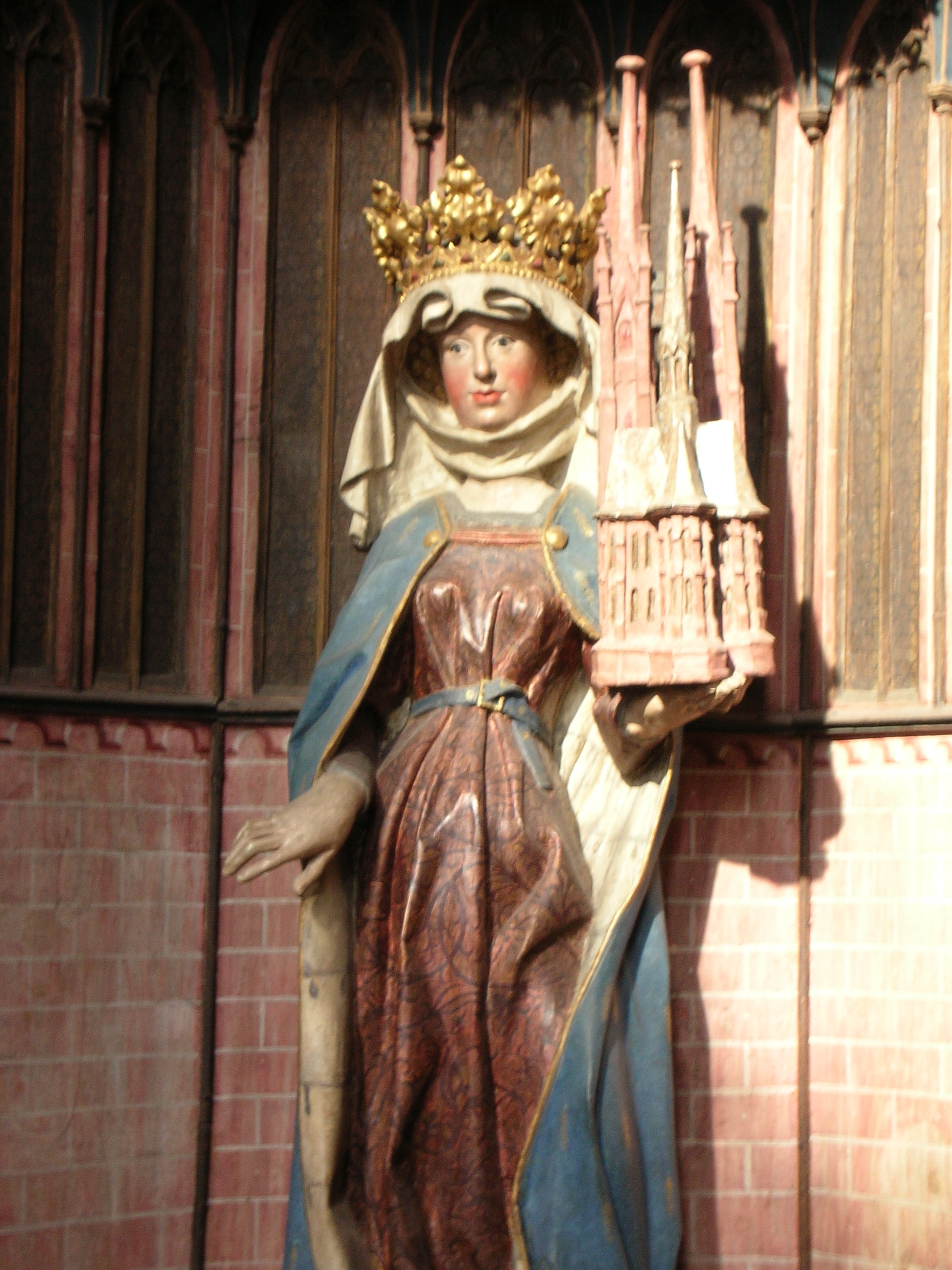 In the statue she is holding the Elisabethkirche.

u) as depicted (witha jug and a loaf, succoring the poor) by the Master of the Drapery Studies in the central panel of the later fifteenth-century St. Elizabeth Triptych (c. 1480) in the Staatliche Kunsthalle, Karlsruhe: 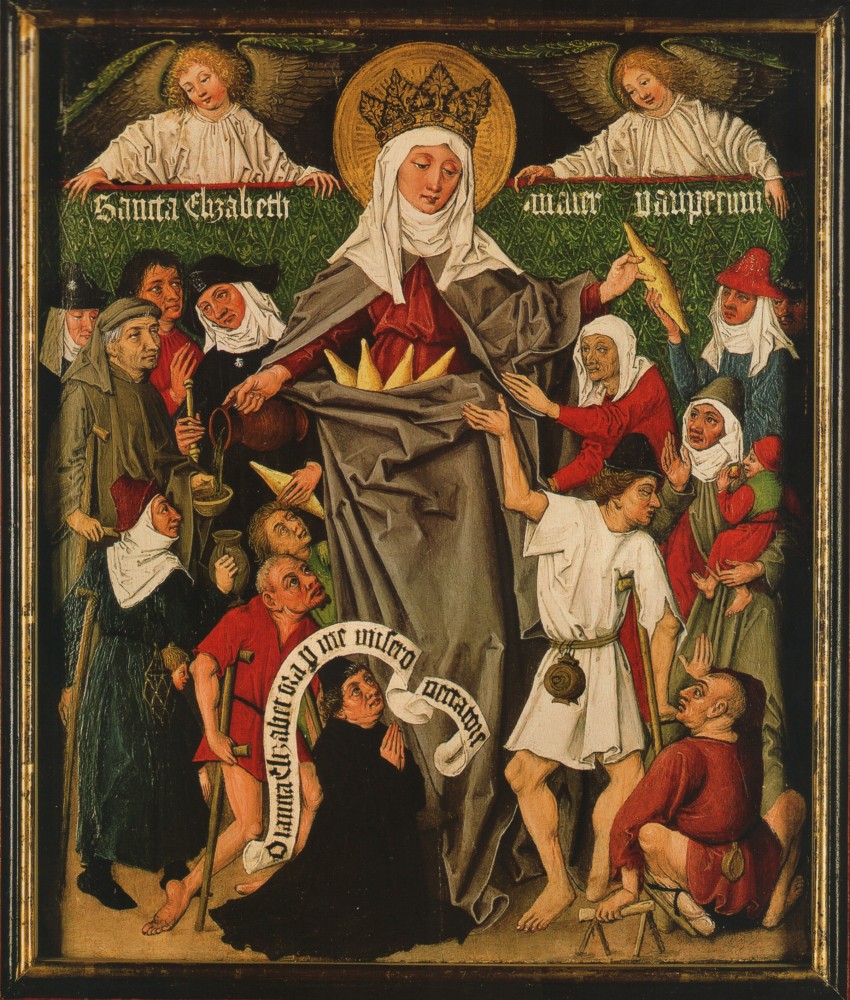 The altarpiece as a whole: 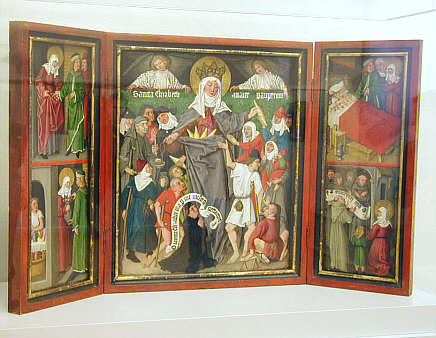 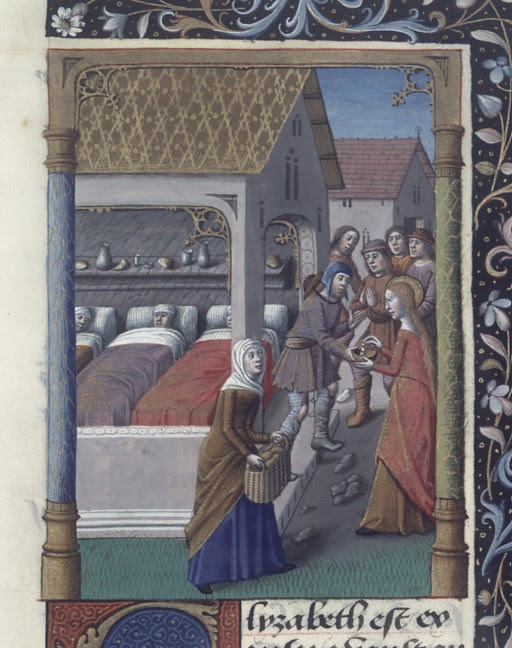 w) as depicted (at top in left margin; holding a jug and a loaf) in a hand-coloured woodcut in the Beloit College copy of Hartmann Schedel's late fifteenth-century Weltchronik (Nuremberg Chronicle; 1493) at fol. CCXIr:
http://www.beloit.edu/nuremberg/book/6th_age/right_page/114%20%28Folio%20CCXIr%29.pdf

x) as portrayed (holding a loaf and a spouted jug) by the Master of the Imberger Altar in a late fifteenth-century polychromed statuette in the altarpiece of the BVM and Saints (1495) in the Kapelle St. Jakobus at Reichenbach, a locality of Oberstdorf (Lkr. Oberallgäu) in Bavaria:
1) at right here:

y) as portrayed (second from left, holding flowers and looking remarkably aged for someone who died at age twenty-four; at left, St. Francis of Assisi) by Andrea della Robbia in about 1500 in his great terracotta relief of the Madonna and Child with Saints in the chiesa di Sant'Agata in Radicofani (SI) in Tuscany:
http://tinyurl.com/26h953j

z) as portrayed (also elderly; holding loaves and a jug) in a late fifteenth- or earlier sixteenth-century statue in the Stiftskirche in Stuttgart:

aa) as portrayed (holding a loaf and a jug) in a late fifteenth- or early sixteenth-century panel painting on an altarpiece wing in the Stiftsgalerie in Herzogenburg (Land Niederösterreich):

bb) as portrayed on an early sixteenth-century Guldengroschen (1502) struck in Kassel by Wilhelm II, Landgraf of Hessen:
http://www.coingallery.de/Heilige/E/Elisabeth_3.jpg

cc) as portrayed in an earlier sixteenth-century polychromed wooden statue (1511) by Ludwig Juppe on the celebrants' sedile in the east choir of the St. Elisabethkirche in Marburg an der Lahn:

http://tinyurl.com/oyrl5sf
In the statue she is again depicted holding the Elisabethkirche

dd) as portrayed in an earlier sixteenth-century statue (c. 1520) of Bavarian origin, ascribed to the workshop of Hans Leinberger, in the Musée de l'Oeuvre Notre-Dame, Strasbourg:

ee) as portrayed in relief in a copy of an earlier sixteenth-century sculpture by Ludwig Juppe on Marburg's City Hall (1527; the original is in the Museum für Kulturgeschichte in the Marburger Schloss): Some contemporary sources say that Elizabeth left Hungary at the age of 4 or 5 and that she was raised by the Thuringian court, meaning that she would have been familiar with the local language and culture. In this sense, she was also "German", which explains her popularity in German speaking regions.