The entry of King Louis XVIII into Paris 1814

Today is the bicentenary of the entry into his capital city of King Louis XVIII in 1814. I posted about his arrival in France in Return of the Bourbons in 1814 - post I have revised slightly by adding another image.

The Senate having offered to Crown to King Louis XVIII on April 6th, on April 12 his brother the Count of Artois, who had been in France since earlier in the year, entered Paris in state as Lieutenant General of the Realm and what the Count described as the happiest day he had known for thirty years. On April 24th King Louis travelled from Dover to Calais accompanied by other members of the Royal family.


On the 2nd of May 1814 King Louis stopped in Saint-Ouen where, under pressure from Tsar Alexander I and urged on by Talleyrand, he signed the Saint-Ouen Declaration, re-establishing the monarchy whilst recognising significant constitutional changes established under the Revolution and the Empire.There is more about the Declaration here. This can be seen as similar to the Declaration of Breda by King Charles II in 1660, and the terms in respect of land confiscated and sold during the Revolutionary regime similar to the acceptance of the sale of monastic estate sin the 1554 English return to the Roman obedience. 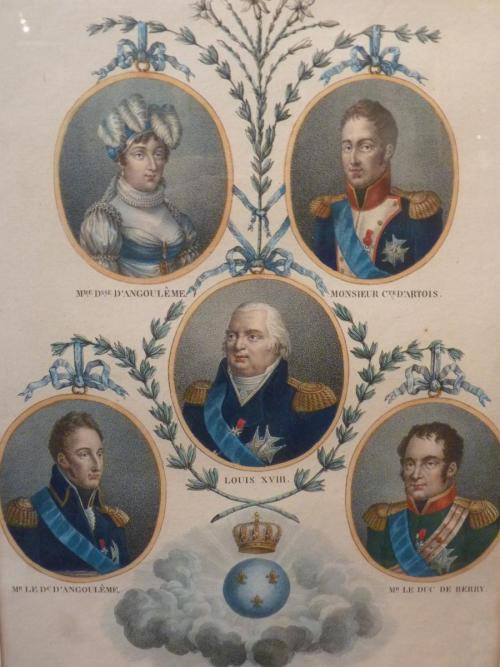 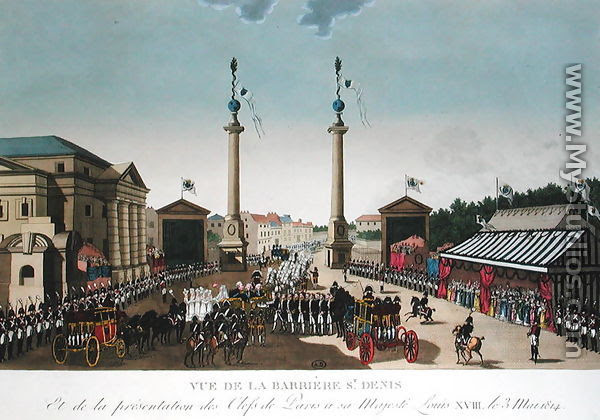 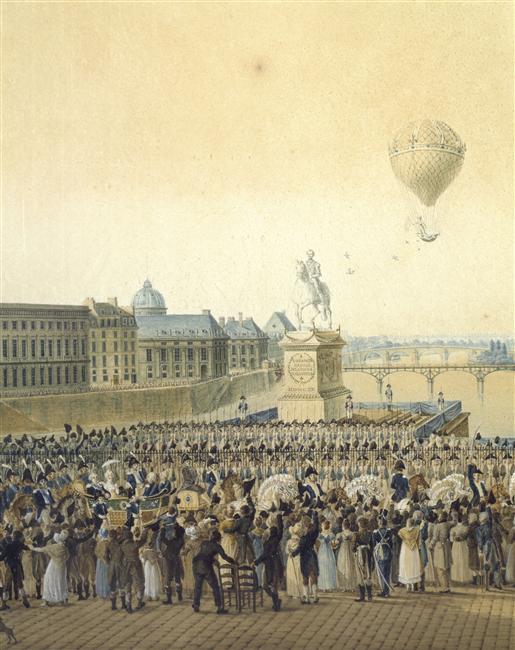 The ceremonial entry of King Louis XVIII into Paris  A detail of  Melling’s painting of the scene. Brunot's equestrian statue of King Henri IV on the Pont Neuf as seen  here replaced the seventeenth-century original that was destroyed during the Revolution. The procession through the streets
Drawn by Courvoisier, engraved by Dubois

When the Royal party finally arrived at the Tuilleries the emotion of the occasion was to prove too much for Madame Royale on her return to the city which had seen the murder of her parents, aunt and brother by the revolutionaries and she fainted. One can hardly be surprised considering what she had witnessed or been subjected to in the city in the years after 1789 before her release from the Temple in 1795.

Nonetheless the Restoration had taken place. The next year witnessed the Hundred Days, but the Bourbons were to return again. Asked if the Crown was secure King Louis opined, in his mordant fashion, that if he outlived his brother it was, but if his brother outlived him he could not be sure. The pity is that there was the 1830 revolution, and no satisfactory Restoration after that  - well not so far...