In addition to being Ascension Day this year May 29th is always Oak Apple Day, the anniversary of entry on his thirtieth birthday of King Charles II into London in 1660, and seen as the symbolic date of the Restoration.

Samuel Pepys recorded that "Parliament had ordered the 29 of May, the King's birthday, to be for ever kept as a day of thanksgiving for our redemption from tyranny and the King's return to his Government, he entering London that day." Until 1859 it was observed as a public holiday, and I see no reason for not re-instating it - the average churlish republican (and you have to be churlish to be a republican in my opinion...) is not going to look too good opposing a public holiday.

One year I did manage to get some oak leaves to wear on May 29th - not that that was as easy as getting arose for St George's day.

Maybe the Church of England, which would not have itself been restored without the Restoration settlement, should re-introduce in Common Worship the special service of thanksgiving for May 29th which was was removed from the Book of Common Prayer in 1859. Given that King Charles II died a Catholic, and showed himself favourable to Catholicism, it could be restored as Anglican patrimony in the Ordinariate.

There is an online account, with links, of surviving commemorations of Oak Apple Day here. In Worcester the day is still marked by decorating the Guildhall gates and railings with oak leaves.Worcester was named as “the faithful city” for its Royalist allegiance during the Civil Wars. The celebrations at Worcester are illustrated, and others at Northampton, Castleton (which is surely a much older tradition converted into a celebration of the Restoration and Aston-on-Clun are all covered in the blogpost Oak Apple Day by Elizabeth Hanbury, which also refers to other surviving celebrations.


The oak is a reference of course to the King hiding in the oak tree at Boscobel House in Shropshire during his flight after the battle of Worcester in 1651. The oak tree where King Charles hid at Boscobel is not the original but is a direct descendant of the original. there is more about it at Royal Oak. 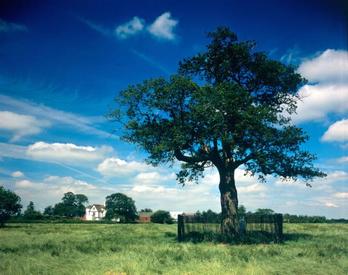 The Royal Oak at Boscobel