My visit to Oscott College yesterday was my first to this famous seminary, of which there is a history here.

The buildings date from 1838, when the college moved to the present site from Old Oscott - now Maryvale. The buildings are the work of Augustus Pugin and Joseph Potter. The college was so impressed with Pugin’s work they appointed him as Professor of Ecclesiastical Art and Architecture, at the age of twenty five.

It was conciously conceived and designed as an evocation of what English schools and university colleges might have been like if there had been no reformation. The main entrance front is very much in the style of an Oxford college - indeed it displays close parallels  with Oriel in particular - and the cloister which links the rooms behind around their central quadarngle is reminiscent of that at Magdalen. The refrectory is a handsome room clearly owing quite alot in design to medieval precedents.


It is, of course, in the chapel Pugin really was able to rise to the challenge. The walls, ceiling and chancel arch are all lavishly decorated in later medieval style colours and patterns. The stained glass, based on fourteenth century work, is designed by Pugin. Interstingly, unlike later nineteenth century revivala rchitects and restorers he did not despise the perpendicular style, and the windows and overall style are of that period. The apse of the chapel reflects the not infrequent late medieval apses of churches in the ancient diocese of Coventry and Lichfield.

His Rood screen gone from the chapel, but otherwise it is much as Pugin planned it, from the encaustic tiles to the stellar pattern on the vaulting.

We were given a tour by Fr Anton of the Birmingham Oratory who pointed out genuine medieval portions of the choir stalls, collected by Pugin, and extended by him to form afull set of seating,fifteenth century Flemish retables, a very impressive seventeenth century confessional from Louvain and an exceptional 1500 lectern, made in Maastricht. I am not quite clear whether it was from the pulpit to the left of the chancel arch or from this lectern that Newman delivered his "Second Spring" sermon in 1852. 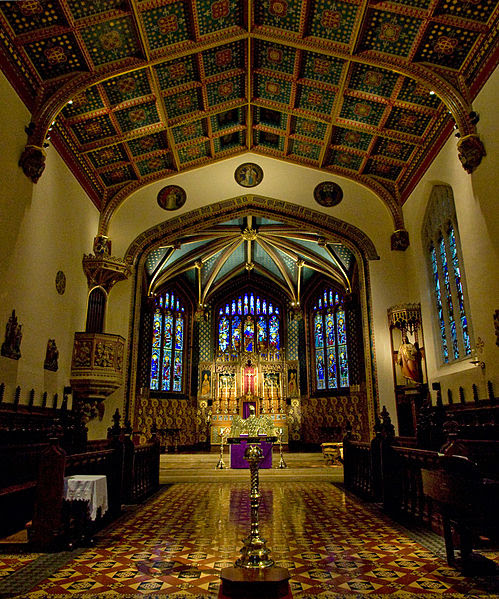 Fr Anton also pointed out in the series of chapels at the south-west end a large alabaster statue of the Virgin and Child enthroned known to the students as "Queen Victoria." The story is that it was originally made for the 1851 exhibition as a statue of Queen Victoria, who disliked it, and sold off it was altered by removing the sceptre and the substitution a figure of the Christ Child for the orb. Well, that's the story...

The statue of the Virgin and Child at Oscott
The brasses on the wall behind commemorate old members and were originally on a painted background of the Tree of Life
Image: Washington Oratory in formation on facebook