Today I went on an excursion organised by the Oxford University Heraldry Society to St George's Chapel at Windsor Castle - my first visit to the castle for over fifty years.

We had a fairly early start from Oxford, as we were booked in at the Chapel for 10.30. So up betimes and off to Summertown in North Oxford for my lift to Windsor. Being between other roadusers travelling times we made good progress. The jorney took us through Slough, and this, my first visit, brought home to me what Betjeman wrote so long ago about it - "Come kindly bombs and fall on Slough/ It isn't fit to live there now"...

On arrival at the King Henry VIII gate of the castle it was a slightly disconcerting sign of the times to be met by the usual attendants plus a policeman armed with a serious looking gun. Nevertheless the welcome to our group was very friendly and we had two of the Military Knights to acts as guides to the chapel and to the Garter plates of the Knights of the Garter in their stalls in the choir.

The choir of St George's Chapel 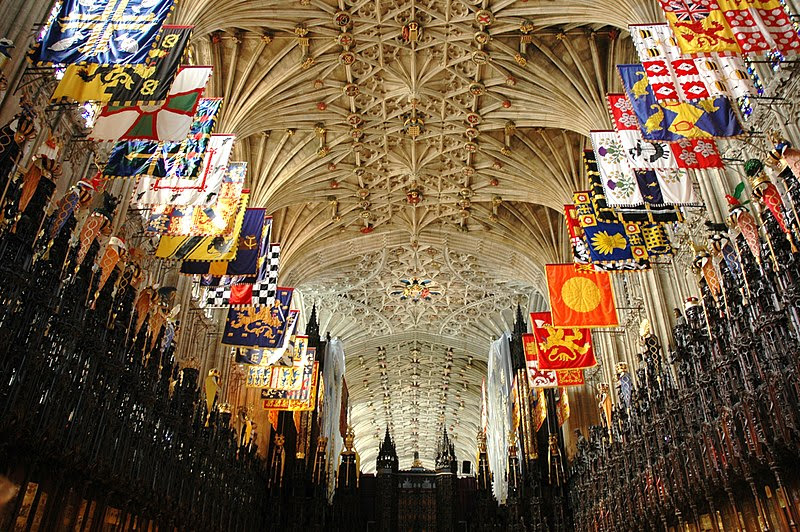 The banners of the Knights of the Garter


The tour of the Chapel enabled me to see things I recalled vividly from my previous visit, plus things I had missed, such as the Beaufort chantry with the tomb of the first Earl of Worcester and, in the south choir aisle, the onetime home of the Cross Gneth, plus things that are not always accessible, such as the Rutland chapel with the tomb of Lord and Lady Roos and the brass of her parents Anne Duchess of Exeter, sister of King Edward IV  and King Richard III, and her second husband Sir Thomas St Leger. The chapel is full of  tombs and memorials of interest to anyone with a sense of history and genealogy - you almost fall over deceased monarchs - there are ten sovereigns buried in the chapel.

The earliest surviving Garter plate, which is of Sir Ralph Basset, together with those of later Knights

The tour of the stalls with the Garter plates was a rare opportunity to get a close view of this amazing collection. To view them all would take an age, but our guide, who has complied a new cross-referenced list of the plates, pointed out those of the first Dukes of Marlborough and Wellington, of Winston Churchill, Clement Attlee, Edward Heath, Margaret Thatcher and John Major amongst Prime Ministers, whilst the array of foreign royalty was amazingly rich. Starting with Charles the Bold of Burgandy and Emperor Maximilian I along the way - and we had to keep moving forward through the lines of the range of stall beneath the Knight's ones, I spotted, inter alia, numerous Portuguese monarchs down to King Manuel II, King Alfonso XIII of Spain, Emperor Haile Selassie,King Ferdinand I of Romania, King Charles X of France, and some other French Kings' plates could be seen in the further distance. There were two plates from the fourteenth century - though possibly not originally in the Chapel - and several of participants in the events of the Wars of the Roses.

I was a little disappointed that some of the most recent plates, such as those of the Earl of Wessex and of the Duke of Cambridge, had abandoned the traditional medieval French for English in their inscriptions - by contrast Lady Thatcher's stall plate was, for all her supposed Euro-scepticism, in traditional French.

After our tour we came out by the Dean's cloister and went for buffet lunch in the basement - the Dungeon - of the Curfew Tower, before having a tour of the Archives of the Chapel and Order. These included displays of early fifteenth century account rolls of the Dean and Chapter with the earliest references to the Garter plates, records of nominations by the Knights to fill vacancies - a practice which durvived until the time of Queen Victoria's widowhood - and which survived in an early sicxteenth century manuscript recovered by chance in London from the clearance of a private collection and returned to King George VI, and plans of the stalls and their plates.

We also were shown items from the library of the Chapel, including a Caxton, and finally the permanent display of treasures, including the illuminated Black Book commissioned by King Henry VIII about 1534-5, and which was on show at the Greenwich exhibition about him in 1991, and has group portraits of the King surrounded by the Knights of the Garter, including Emperor Charles V, King Francis I, King James V and King Ferdinand I. 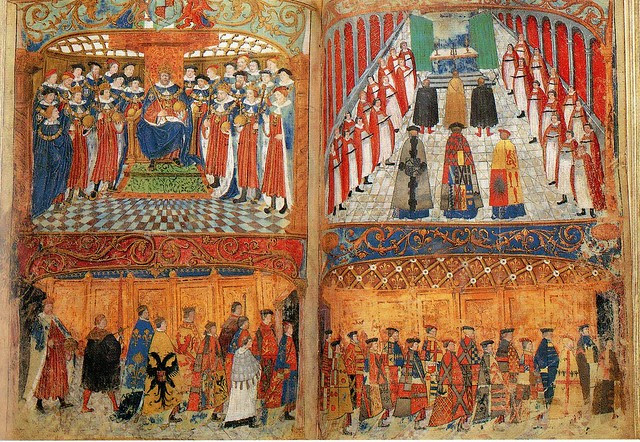 The Black Book of the Garter

The Black Book, named after its black velvet binding, is the first surviving register of the Garter. It was begun in 1534 when Henry VIII was married to Anne Boleyn. However it incorporates material from earlier registers (which are now lost) dating to the reign of Henry V. The text is in Latin and it contains statutes, an account of the foundation of the Order and the record of ceremonies and elections. It is finely written and richly illuminated in the Flemish style. There are representations of the founder of the order, Edward III and his wife Philippa along with Henry V.

The Black Book shows the impact of the Reformation as in later admissions, various decorations of the Order that are depicted have been mutilated and wiped out to eliminate ‘superstitious’ elements.

Image and text :little-miss-sunnydale on Flickriver.com

As well there is  in the display the Red Book, commissioned by Queen Elizabeth I, and the Blue Book from the reign of King Charles I. Also on display were a tally list of votes in the papal conclave of 1676 - how that got to Windsor is unknown - and handwritten nominations by several seventeenth century Knights, including the future King James II.

This was fascinating day out, and I am very grateful to the organisers for arranging it. If any reader gets the chance to have such a tour I warmly recommed doing so. In any case Windsor is so rich in fascinating things to see that any visit, or indeed repeated visits, is definitely something to do.