Yesterday I went to the Episcopal Ordination of Bishop Robert Byrne, formerly Provost of the Oxford Oratory, in St Chad's Cathedral in Birmingham.

I have adapted this post from the excellent one by Charles Cole on the New Liturgical Movement site, adding my own comments where appropriate.

Bishop Byrne is the first Oratorian Bishop in England in 140 years, the last being Fr Edward Bagshawe who became Bishop of Nottingham in 1874. Fr Robert Byrne was one of the founders of the Oxford Oratory and he will serve as an auxiliary bishop in Birmingham, with responsibility for the city and for Worcestershire. He will be the titular Bishop of Cuncacestre (Chester-le-Street). The Ordination was attended by the Oratory Fathers from Birmingham, Oxford, Manchester, London and York, as well as from the Oratory in formation in Washington DC and by oratorians from Europe.


Blessed John Henry Newman's beatification by Pope Benedict in 2010 has brought so many blessings to our local Church... we must now count (Fr Robert Byrne's) episcopal ministry among us as one of the gifts we have received through the intercession of Blessed John Henry, Cardinal Newman. We see in tomorrow's ordination a deepening appreciation for the charism of the Oratory as members of its various English houses increasingly play their part in the life of the Church at diocesan and national levels.


During the sermon at the Ordination His Eminence Cardinal Nichols said:

After Bishop-elect Robert makes his promises, we turn in prayer to the saints of the Church. Uppermost in my mind will be St Philip Neri, so well known as the saint and prophet of joy, renowned for his relaxed and attractive method of education, living across the road from the Venerable English College in Rome, giving his blessing to the young students, especially as they set out for their mission here in England. We certainly ask for his blessing today on this man.

And Blessed John Henry Newman, of whom Father Robert is a true son. He too will bless us today and enkindle in us that same passion for the truth of faith which he followed at such cost and with such rigour. His journey was described, on his tombstone, as one of moving ‘Out of shadows and images into the truth.’ May that be our daily journey, too, coming each day more fully into the light of the glory of God shining in the face of Jesus.


The photographs below show the Vigil as well as the Episcopal Ordination and are taken from the Catholic Church of England & Wales Photostream.
© Mazur/catholicnews.org.uk
The Vigil service at the Birmingham Oratory, rebuilt as a memorial to Bl. John Henry Newman: 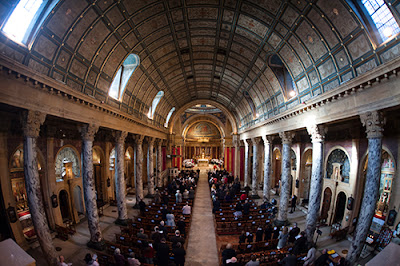 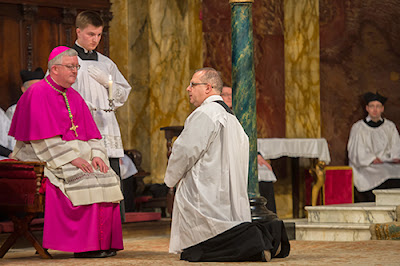 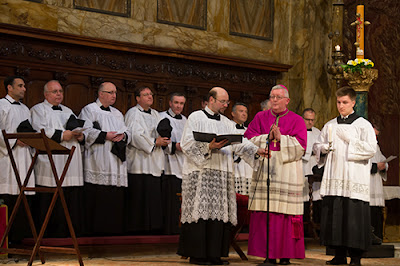 The blessing of Bishop Robert's pontificalia by the Archbishop: 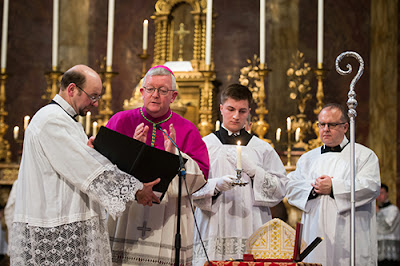 The Archbishop's address to the congregation: 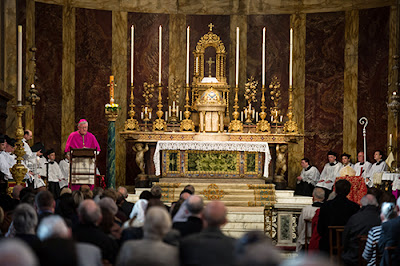 The Archbishop gives Benediction of the Blessed Sacrament: 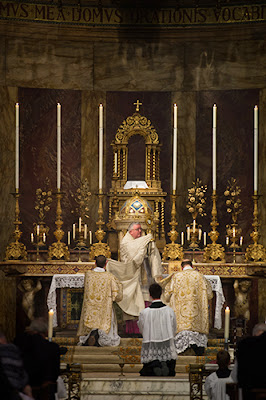 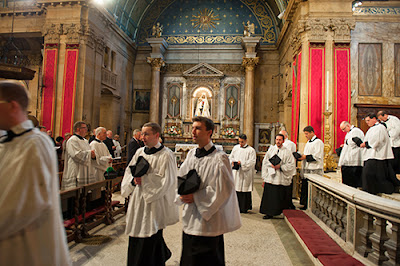 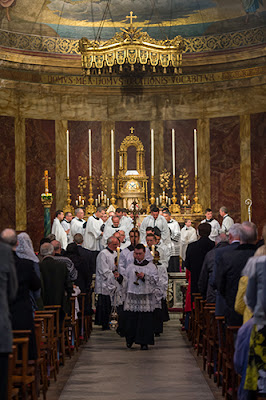 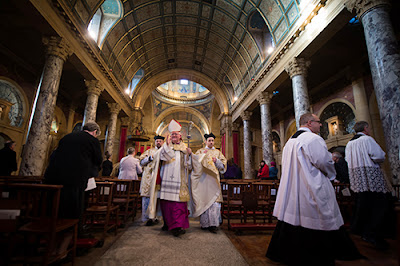 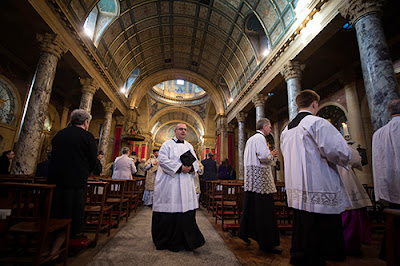 The Archbishop, the Bishop-elect and Oratorians in the Newman Chapel at the Oratory: 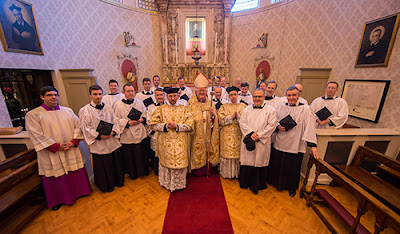 On Tuesday two coaches brought members of the Oxford Oratory congregation, togetehr with the Oratorians and some Dominicans up to Birmingham. We arrived an hour earlier than the time of the liturgy, which gave time to pray for the Bishop-elect. I was sitting at the western end of the north aisle, which afforded a good view of the processions, but Mr Pugin's pulpit cut off much of the view of the ceremonies, but that is just the way things work out on these occasions. I did however have good view of the Cardinal when he delivered his homily.

The procession of Bishops preparing to enter the cathedral: 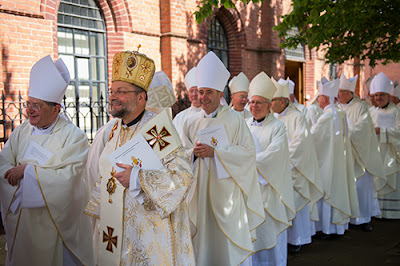 This, and the procession into the cathedral of the clergy, was an impressive reminder of the number of Catholic clergy who serve the faithful in this country.

The Papal Bull was read by Bishop David McGough as Provost of the Cathedral Chapter.

The Archbishop, flanked by the co-consecrators, Bishop Philip Pargeter, the retiring Auxiliary Bishop for Birmingham and Bishop Michael Barber of Oakland Ca., an old friend of the new Bishop, listen to Cardinal Nichols' homily. The Bishop-elect is seated at the foot of the steps : 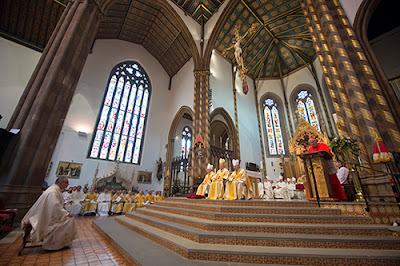 The candidate prostrates himself before the altar and the consecrating bishops: 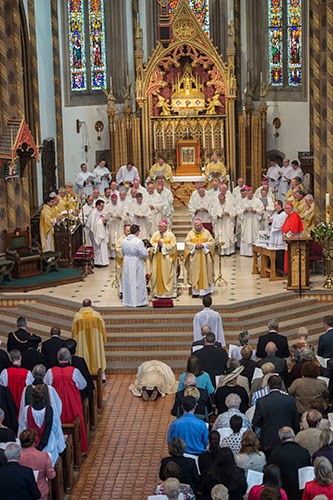 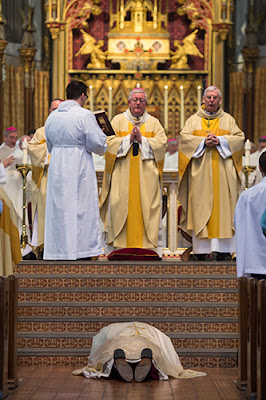 The chasuble worn by the new Bishop was that worn by Pope Benedict for the beatification of Bl.John Henry Newman at Birmingham in 2010 - the Papal arms are visible: 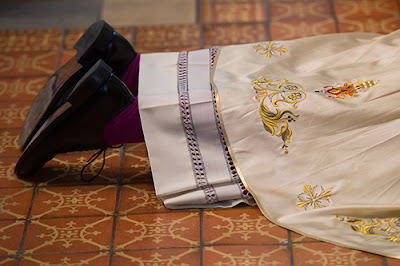 The anointing with Chrism: 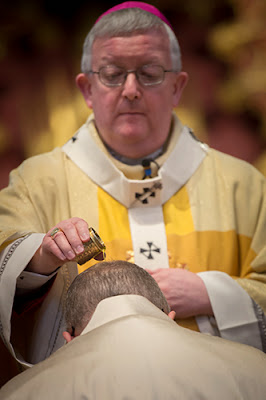 The Gospel book is held over the candidate's head during the prayer of consecration: 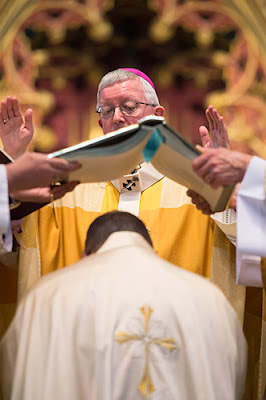 The Archbishop lays on hands: 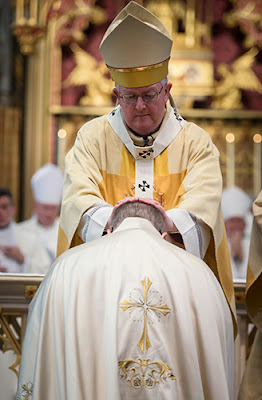 He was followed by the other Bishops present: 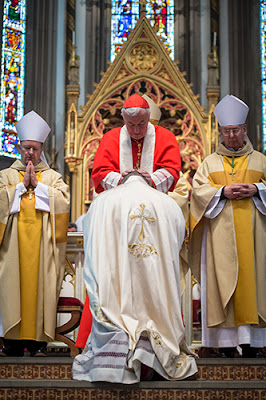 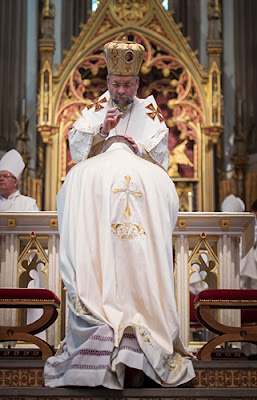 The delivery of the ring to the new Bishop. It is a handsome piece with a fime amethyst. 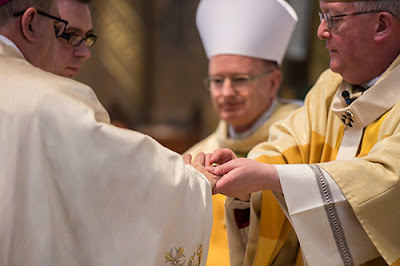 The mitre is placed on Bishop Robert's head: 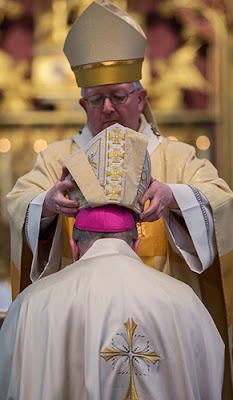 Listening to this part of the liturgy and reading in the service book the formulae and understanding their significance it struck the historian in me (who is never far away) why eleventh and twelfth century Popes and reformers were so concerned by lay investiture with the ring and the staff. Whatever the legitimate concerns of Emperors and Kings as to territorial matters in regard of episcopal estates and military service, such a ceremony could indeed look as if it was the lay ruler, and not the Church, who was making a man a bishop, and all that implied. 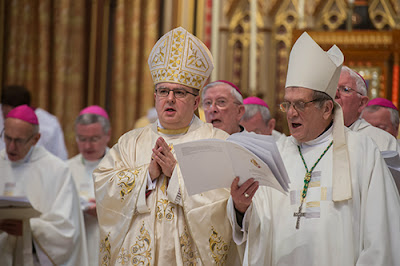 The kiss of peace: 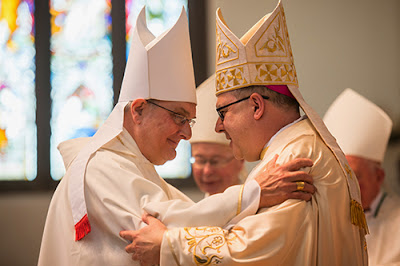 The new Bishop is seated in the place of honour: 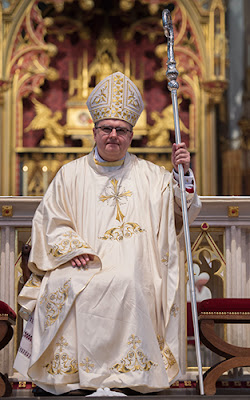 The new Bishop processes around the cathedral giving his blessing as the Te Deum is sung - in Latin: 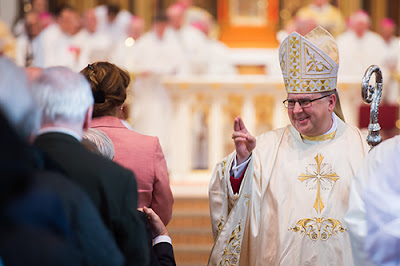 Following the Mass the Apostolic Nuncio, Archbishop Mennini, addressed the congregation and then Bishop Robert did expressing his gratitude and thanks, and speaking about his new mission as a bishop. He referred to his newly chosen episcopal motto - Soli Deo - as what he was called to proclaim to the Church and those outside it. He spoke of his appreciation of the prayerful support he had received over the weeks sinc ehis appointment was announced, and ot the vital need for prayer in the lives of the faithful. He also referred to his long experience as a prison chaplain as well as his work in ecumenical relations in recent years. To this he brought also his dry Lancashire humour - upon telephoning a priest friend to tell him of his appointment he received the comment "Well, they are desperate..."

So, after two and half hours of rich ceremonial and solemn significance, we had a new Bishop.

From the catehdral we were transported by our coaches to Oscott College for a buffet lunch and a time to catch up with Bishop Robert - now looking very much the part in his habitus Piano, and with the chrism seeping through into his zucchetto - and with old friends. I will say more about Oscott as a building in the next post.

A wonderful day, and one on which I felt reinforced in my own Catholicism.

Hi, hon - lovely as those pictures were, I found a more comprehensive set here: less polished, more blur, but SO many more moments - 216, to be exact! - including Bishop Bob, as he's asked me to call him, going down to his parents and some of our Lesser Spotted Oratorians. http://www.stchadscathedral.org.uk/galleries/episcopal-ordination-bp-byrne

I was rather surprised that there weren't quite a number of official pictures taken of the new bishop with the various communities, the CCEW one from the vigil wasn't great, as it was taken from a distance and you couldn't see anyone properly. Why not take an official one with the Oxford community, etc. Looking to see if I can find the Oscott reception set.

Found a few from the reception, thanks to the DC Oratorians: