Ceremonial of the Order of the Bath

Last week the news that The Queen had delegated a part of the ceremonial at the service of the Order of the Bath - the Offering - to the Prince of Wales as Great Master of the Order led to more media coverage of the ceremony than might otherwise have happened. That Her Majesty at 88 might be advised to save herself a potentially awkward move down steep steps in evening dress and the robes of the Order from her stall to the altar and back is, in itself, no very great surprise.

There is in a sense more interest in both the interest this has caused as a news story, and in the fact that images of the ceremonies of the Order are readily available online. 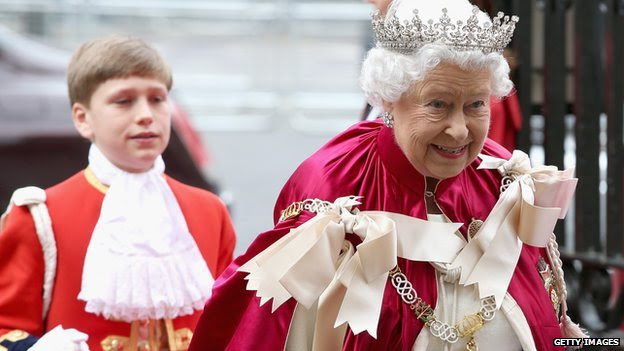 The Queen arrives at Westminster Abbey for the service

Last Saturday's Daily Telegraph has good coverage in Queen drops out of ceremonial role over concerns about steep steps and the BBC website, which can be seen here also features archive images.

There is an online history of the Order, its insignia and officers at Order of the Bath.