Today is the 240th anniversary of the death at Versailles of King Louis XV in 1774. 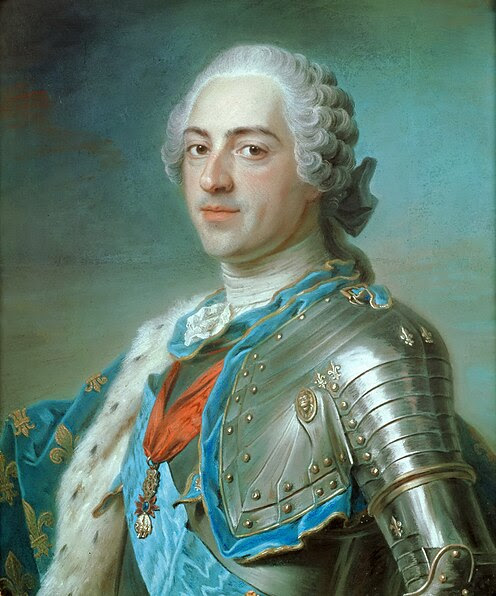 As the online biographies here and here, both with a good illustrations of portraits, suggest there is considerable discussion as to the impact of the King's long reign on the life of France and the extent to which it set the scene or created the climate for the events leading to the revolution of 1789. Inevitably some of this is merely hindsight, some of it an accurate assessment of the relative decline of French power and institutions in the eighteenth century. A consequence of the rise of modern history in the nineteenth century and the political pre-conceptions of many of its practioners in both France and Britain has been a tendencey to point the finger of blame at the personalities and events of the reign of King Louis XV, and not least the King himself. This may well be unfair in human terms, and unfair in terms of balanced historical assessment.

That the Ancien Regime needed an obverhaul was, I think, recognised by most people at the time. The problem lay more in the practicalities of doing that. Such was the structure of society that the interlocking elements, many very long established indeed, inhibited movement. in that the King and his ministers were caught, with relatively little room to manoeuvre. When, late in the reign, the Parlements were suppressed as areformist move it merely alienated the Parlementaire class, who came back with the restoration of the institutions after 1774, but now less amenable to the Crown. Reform was not completely ignored, but needed sustaining. In that respect the system failed to maintain momentum.

Whilst other European rulers did tackle problems of administrative reform, often root and branch, I suspect the French failure to do so came, in part, from complacency about what had been achieved under the King's great-grandfather, King Louis XIV. I can well imagine a complacency about French ascendency that took along time to be challenged. The Philosophes might argue for a range of things - and were indeed protected in a way by Mme de Pompadour, and hence the King, but were they merely the chattering classes of their day?

The pursuit for much of the reign - and indeed its active promotion as na image - reflected not only financial necessity but also political reality. The wars of King Louis XIV had been waged in aEurope France could expect to dominate. The French may have expectesd, despite the crise sof the last years of the old King's reign, that this would continue. However King Louis XV and his government faced new military powers who reconfigured the European scene - Britain, Prussia and Russia were major new factors to be dealt with, as wasa resurgant Austria under the Empress Maria Theresa.

That more needed to be done in the way of governmental initiatives can certainly be seen, and I suspect was, but how was an unanswered,and possibly unanswerable question short of sweeping everything away. that happened after 1789 of course, but that is not to say that was a good thing - it was n't. To blame the King hmself seems somewhat unfair. His popularity certainly fluctuated and declined in many ways as the reign progressed, but eighteenth century Kings did not expect to rule by the whims of public opinion polls.

The King's limitations and shortcomings - not least his pursuit of female comapnsionship - may well have been a consequence of being orphaned so young, and his early accession to the throne - he was more isolated than his great-grandfather or grandson were to be as  monarch.

Maybe he needs a revisionist interpretation that looks at his life and reign in term sof his own times whilst avoiding the nostalgic temptation to eulogise or sentimentalise a lost era. Such a study might well give a more positive assessment than that which is often given of Louis the Well-beloved.