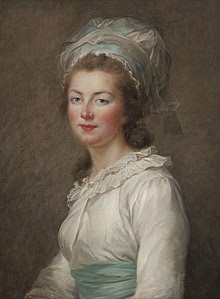 Today is not only the anniversary of the death in 1774 of King Louis XV, but also of the guillotining of his grandaughter Madame Élisabeth in 1794.
There is an illustrated online account of her life here, and one from the palace of Versailles website entitled Madame Elisabeth. There is another account of her, with good illustrations, here.

The interesting blog Tea at Trianon has a post from a few years ago The Death of Madame Elisabeth of France and the Digital library Project has the memoirs of her neice Madame Royale and of Cléry, King Louis XVI's valet which can be seen at The Ruin of a Princess.

Madame Élisabeth was clearly a determined and devout woman, noted for acts of charity. Probably the most opposed of her family to the revolution's challenge to the existing system, and who, devoted to her brother the King and his wife, stayed with them at the Tuilleries and in the Temple. By not feeling she may have sought to stiffen the King's resolve in the face of the revolutionary demands. By doing so she sacrificed her life. Whilst in the Temple she looked after Madame Royale after the Queen was removed to the Conciergerie, and knew nothing of her fate until her own death.

The cuase of her beatification was introduced in 1924.