Today, for the first time, I visited Harvington Hall near Kidderminster in Worcestershire. The visit was organised as a summer excursion for the Brothers of the Oxford Oratory.

Harvington Hall from the east

The Hall is an Elizabethan moated manor house with rare wall paintings and the greatest series of priests' hiding places in the country - it has seven plus a vestment hide - and they are thought to be the work of St Nicholas Owen. When they were constructed Harvington was owned by Humphrey Packington. There is an illustrated online account of the history of the house at the post Harvington Hall
from the blog Tudor Stuff, and there are more photographs and information here. 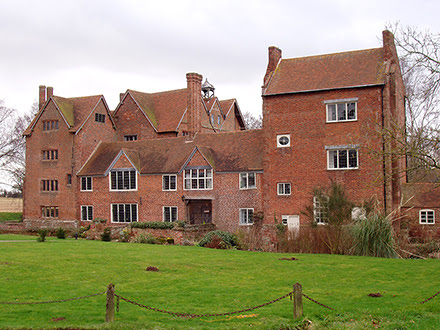 A model of Harvington Hall as it may have appeared when completed by Humphrey Packington.
The demolition and alterations of c.1700 removed the battlements and the three blocks at the rear on the north west. The view is from approximately the same angle as the photograph above.

In 1696 it passed by inhertance from Humphrey Packington's daughter, Lady Mary Yates, to the  Throckmorton family, who were based at Coughton Court. Probably as an economy measure they demolished the north wing and the Great Hall on the western side about 1700, leaving a rather lop-sided plan. A model in the house indicates the rather grander appearance the Hall originally had. The house was partially occupied by relatives and by the priest but gradually decayed, and by 1826 the family had moved elsewhere and much of the top floor was unfurnished; by 1904 it was described as `hastening to decay'. However in 1923 it was bought by a benefactor, Ellen Grant-Ferris, and given to the Archdiocese of Birmingham and is now managed through a voluntary committee. Restoration work over the years has revealed the wall paintings and is a continuing process to enhance the building and its setting.The wall paintings, though faded, do indicate the often lavish and colourful decoration of houses in the period.

Amongst the items on display are some very fine vestments - one associated with St John Wall, who was martyred in 1679 and who had ministered at the Hall. These are displayed near the old chapel in the upper part of the building. Originally the walls and ceiling were covered with a trailing design of flowers whcih must have made the chapel into a simulation of a floral bower.


The official website of Harvington Hall can be seen here. I would certainly recommend the Hall for a visit by anyone interested in recusant history or more generally in the history of the period.

The Hall offers excellent refreshments - we had a good lunch to set us up for sightseeing - and audio guides as well as several publications on the history of the house. There is also a Heritage Centre in the Malt House at the rear with films about the history of Harvington.

Adjacent to the Malt House, and backing on to the moat, is the Georgian Chapel. 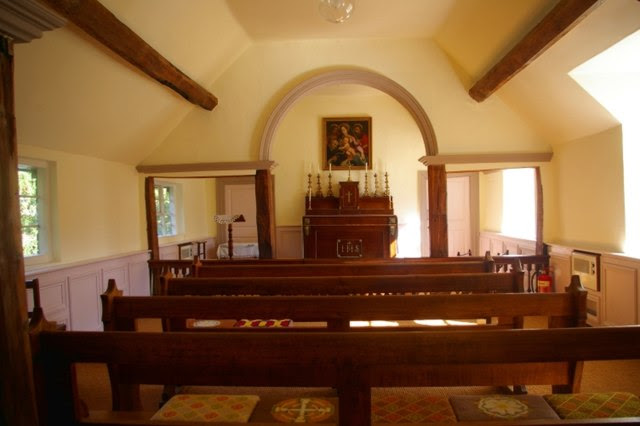 The Georgian chapel at Harvington Hall


The chapel was created in 1743 by adapting the upper storey of a farm outbuilding, to replace the original chapels on the top floor of the house, and was in use until 1823 when it was damaged by fire. Services were transferred to the new church of St Mary which opened in 1826, and after renovation the chapel was converted into a village school which functioned until 1913.

In 1987 it was returned to its original use as a chapel and fitted out with contemporary furnishings, including the early 19th-century altar and communion rails which came from a church at Upton upon Severn.
Image:   © Copyright Tiger and licensed for reuse under this Creative Commons Licence./ Geograph

Facing the Hall to the east is the parish church. This is now the official shrine of St John Wall, and there are bronze reliefs of him and St Nicholas Owen in the church. 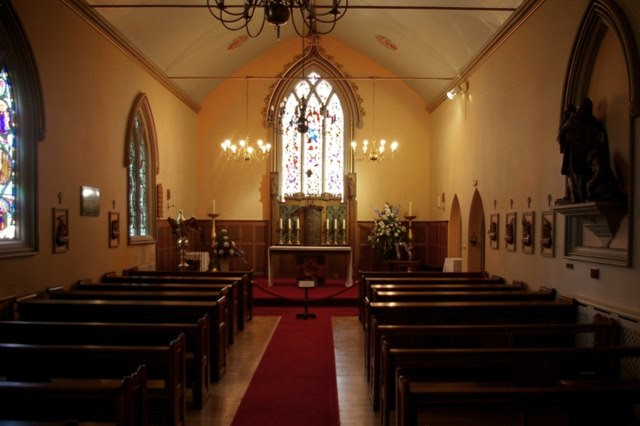 The interior of the Gothic church built across the road from Harvington Hall in 1825 for Sir George Throckmorton. The east window with interesting Y-tracery was installed in 1855, probably by C.F. Hanson, and the stained glass by Hardman of Birmingham dates from 1893.
Image:  © Copyright Tiger and licensed for reuse under this Creative Commons Licence/Geograph


It was in the church that we said the prayers used by Brothers at our weekly meetings, to bring to mind that this was a pilgrimage as well as a very enjoyable day out.

Our jorney back brought us across Worcestershire, and with warm afternoon sunshine and lush foliage all around us a pleasure in itself. We stopped off briefly in Evesham, with me acting as guide, to look at the site of the abbey and to also see for the first time the statue of Eof, the swineherd whose vision led to the foundation of the abbey there - but I will post about that seperately next week.

After that we crossed the remainder of theVale of Evesham, climbed Broadway Hill with its specatular views of the region, and back through Chipping Norton to Oxford. A splendid day out, and my thanks to Fr Jerome for organising it and Mark for bringing his people-carrier to take the brethren out.

An absolutely wonderful place, though a pity the original staircase was removed to Coughton. It is very atmospheric.
I hope you took a picnic lunch by the lake!

and it is also very anonymously published :(