What would St Augustine say?

Today, according to the modern calendar, is the feast of St Augustine of Canterbury . He died on May 26th 605. 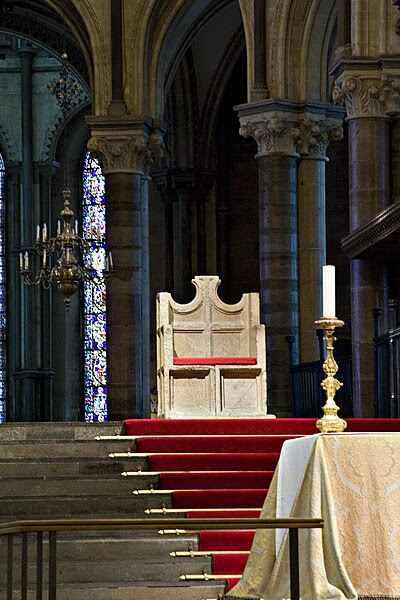 The throne of St Augustine in Canterbury Cathedral

I am tempted to ask the rhetorical question as to what St Augustine would have said about the Ordinariate. Well, the answer is, I think, clear. More particularly I raise the point because of the story of St Augustine's meeting with the British bishops. In adavnce they decided that they would respond positively to what Augustine said if he stood up to receive them, negatively if he did not. Augustine remained seated, and dialogue did not happen. The British bishops, whose community had been formed in large part by reaction to pagan Anglo-Saxons invadors, whom they appear not to have tried to convert, left and headed back to the ever more remote west.

Fourteen centuries later Rome has again made advances to the British clergy of their day, and, metaphorically at least, has stood up to be welcoming. Notwithstanding that I fear that too many clergy and laity may be making the same mistake as those British bishops they sometimes invoke as their patrimony, and not responding positively.
Pre-Augustinian British Christianity was Roman in orgin, and here was a man with a message sent from Rome. Pre-Reformation, pre-Laudian, pre-Tractarian and pre- Ordinariate English and British Christianity was and is Roman in origin, and here are men with a message sent from Rome. Are not the inevitable inferences to be drawn?
Posted by Once I Was A Clever Boy at 11:45

I see how your way of looking at things is rooted in history. I have not thought of things that way and I find it novel but convincing. Thank you for your observations.
On another note, I too hail from the West Riding but I am long removed from domicile there. I live 12,000 miles away on the other side of the world and the other hemisphere.