This past weekend gave me several opportunities for acts of liturgical supererogation.
On Saturday afternoon I was thurifer at the Juventutem Oxford Mass celebrated at SS Edmund and Frideswide, better known as Oxford Greyfriars, and sitruated in Iffley Road. The celebrant was Fr Anthony Conlan. 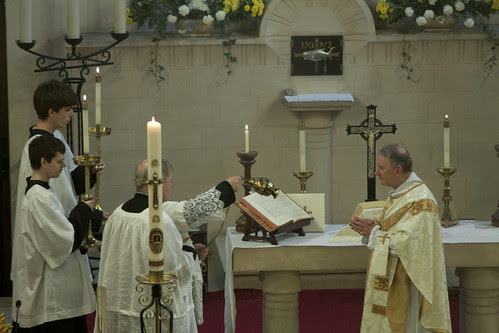 The Mass in the Church of SS Edmund and Frideswide, the parish church which is also the chapel of the Fransiscan Priory, Greyfriars, was celebrated for us by Fr Anthony Conlon, Chaplain of the Oratory School outside Oxford. Fr Mark Elvins OFM Cap, the Guardian of Greyfriars, was present (see below, sitting on the left of the picture). 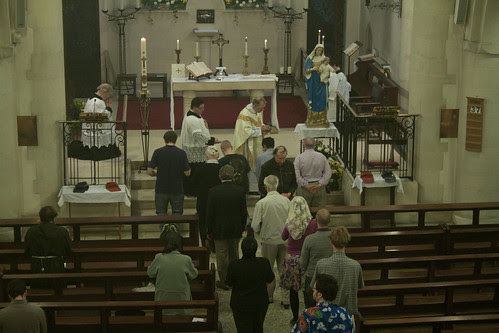 Photographs from Joseph Shaw's Flickr account
This was only the second time I had been into the church, which is a handsome building in a neo-romanesque style.

This was the first time the Mass had been celebrated in the usus antiquior there for very many years and the occasion received enthusiastic support from Juventutem members and others. There is now a blog site for the group which can be read at Juventutem Oxford.
In the early evening I went to the Ordinariate Mass at Pusey House. Here the celebrant was Mgr Burnham and the preacher Fr Richard Conrad OP. Once agian we saw the possibilities the Ordinariate offers for dignified liturgy and the integration of an Anglican patrimony - the wording of prayers, the choice and style of hymns and motets and a general cultural ambiance that in no way impedes the fullness of catholic unity. As last week I had the vital liturgical functions of handing out service sheets and taking the collection. The local group now has a blog of its own which can be viewed at Oxford Ordinariate group.
Afterwards over supper with a friend who is a longer term convert than myself we discussed not only these liturgical aspects of the Ordinariate - the most obvious signs so far - but alsq how the integration of the Anglican spiritual heritage of devotional writing can be shared and of the need to demonstrate that the Ordinariate is, and should be much more than just another parish group. We agreed that it is early days yet, and that as ordinations and, hopefully, more receptions follow, the pace will pick up. Nonetheless encouraging people to think about these aspects and helping them along is something we can do as individuals now.
On Sunday, following the Solemn Mass at the Oratory, I went up to north Oxford to SS Gregory and Augustine to help with the celebration of their May Devotion and procession in honour of Our Lady. Once again I was thurifer and we started with a reading of Bl. John Henry Newman's exposition of the practice of the May Devotion in the church grounds, followed by the procession into the church, the crowning of the statue of Our Lady of Fatima in the Lady Chapel and the recitation of the litany of Our Lady. The children brought their flowers to place before the statue and we concluded with Benediction at the High Altar.
The weather being kind it was possible to conclude the afternoon with the promised tea and cakes in the Presbytery garden before getting a lift back into the city centre for the regular Vespers and Benediction at the Oratory.