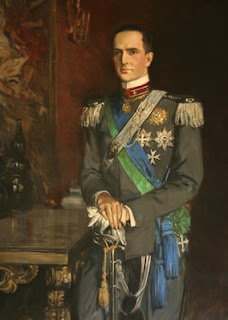 The Mad Monarchist has had three posts recently about King Umberto II and his family to mark the sixty-fifth anniversary of the King's accession to the Italian throne and his dethronement in May-June 1946. They can be read at Monarch Profile: King Umberto II of Italy, Favorite Royal Images: A May King and Queen and The Faithful of the House of Savoy.

The posts not only recount the King's life and the fate of the Italian monarchy, but also look in the third one at the complex relationship between the House of Savoy and the Catholic Church during and after the process of Italian unification. As I have written before the difficulty the Savoys had was a consequence of the dangerous pact with forces that were often unsympathetic and at times openly hostile, to traditional values, whether of the Church or the Crown itself. It was King Umberto's misfortune to be forced with his family into exile as scapegoats by a political class who had failed in the past and who have failed to deliver stability or good government in Italy since 1946.

The Austrailan Radical Royalist blog has this post about the King 9th May 1946: Accession of King Umberto II of Ital...
Posted by Once I Was A Clever Boy at 11:06