Our Lady of Fatima

Today is the feast of Our Lady of Fátima, celebrating the first apparition of Our Lady there to the three shepherd children on this day in 1917. These continued on the 13th of each month until the 'Miracle of the Sun' on October 13th that year.

There is an online account of the apparitions and history of the shrine here.

The story of Fatima is one that is truly extraordinary, and one which confronts so many prevailing preconceptions in our society. In itself it is call to faith, and one that is challenging and demanding. What the children of Fatima saw and relayed was no easy religious option, no easy comfort, but an awareness of spiritual and indeed physical combat with dark and dreadful forces. 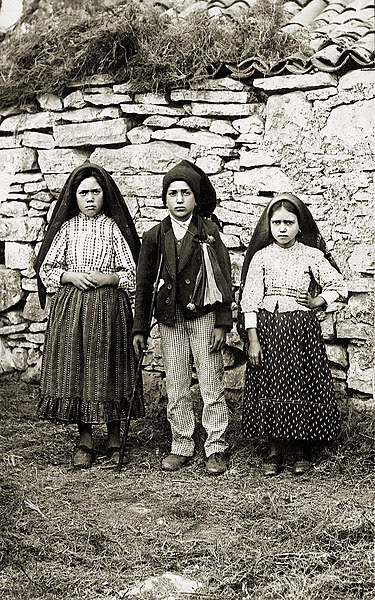 I have not had the possibility of visiting Fatima. but its story is one that has fascinated and intrigued me since I first saw a television programme about it in the 1970s. As the link I give above bears out the extraordinary number of coincidences that surround the story, and events on the 13th of different months and different years that point to the shrine suggest the hand of Divine Providence.
In 2009 a film The 13th Day was produced which narrates the story through the memories of Sr Lucia, who died aged 97 in 2005. I have not so far managed to see the film, but it received positive reviews from the Catholic press.
May Our Lady of Fatima pray for the Pope and for the Church,
and for us all.
Posted by Once I Was A Clever Boy at 10:24

Labels: Fatima, Our Lady of Fatima